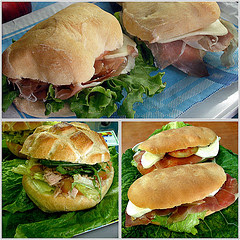 We all know we’re taking in too much salt, but what is surprising is the number one contributor of sodium in the average American diet. In a nutritional study of 7,227 Americans, the Centers for Disease Control and Prevention (CDC) has found that bread leads the list. Bread by itself is not that high in salt, but the average American consumes so much of it on a daily basis.


Alice H. Lichtenstein, Dsc, director of Tuft’s HNRCA Cardiovascular Nutrition Laboratory, advises that it may be different for some individuals: “Although for most people bread is the major contributor, for others it may be salty snacks, eating foods prepared outside the home, or salt added during cooking. In those cases there are many options to reduce intake, such as shifting to different types of snacks, preparing more foods at home, or gradually cutting down on added salt when preparing food.”

1) Bread and rolls are the source of 7.4% of sodium in the typical American diet. Salt is necessary in the baking process, but the amount of salt used varies. Low-calorie bread is usually lower in salt. Always check the label.

2) Cold cuts and cured meats contribute 5.1% of our sodium intake. Most stores will have reduced-sodium meats available, which will eliminate about 25% of the salt. There is even a lower-sodium Spam. Reduced-sodium bacon has about half the salt as regular bacon.

3) Pizza contributes 4.9% of sodium mainly because most of its ingredients are salty: cheese, pepperoni, sauce, and the crust. The average 14-inch all-dressed can have up to 6,000 mg of sodium. It’s best to make your own. Buy low-sodium cheese and go vegetarian instead of pepperoni and sausage.

4) Fresh and processed poultry account for 4.5% of the nation’s sodium. That’s because a lot of the chicken we consume is fast food: nuggets, fried, and chicken club sandwiches. Home cooking is best.

6) Sandwiches and burgers account for 4%. One big Mac contains 1,040 mg of sodium. Use low-sodium cold cuts and cheese for your sandwiches.

7) Cheese by itself accounts for 3.8% because it is such a commonly used ingredient. One ounce of reduced-sodium Swiss cheese contains 4 mg of salt, while one ounce of regular Parmesan contains 454 mg.

8) Pasta accounts for 3.3%. Best to make it at home and use low-sodium sauces. Olive Garden’s Lasagna Rollata al Forno contains a whopping 2,510 mg of sodium. On the other hand, Olive Garden’s Linguine alla Marinara contains only 900 mg.

The editors, “Where is Your Sodium Coming From?” Tuft’s University Health & Nutrition Letter, May 2012