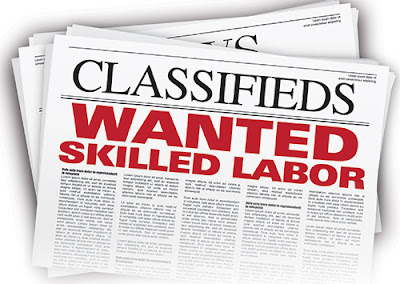 For Americans and Canadians willing to get their hands dirty and work hard, the prospects of a stable, well-paying career have never been rosier. An army of aging construction workers will retire over the next few years. Serious shortages of skilled labor are already evident today and projected to increase in the next seven years. This, and a few other reasons, will offer a myriad of opportunities for good jobs with good pay.

Too many Americans are unnecessarily either unemployed or under-employed:


“Employers across industries and regions have complained for years about a lack of skilled workers, and their complaints are borne out in U.S. employment data. In July (2015), the number of job postings reached its highest level ever, at 5.8 million, and the unemployment rate was comfortably below the post-World War II average. But, at the same time, over 17 million Americans are either unemployed, not working but interested in finding work, or doing part-time work but aspiring to full-time work …… The fault appears to be diffused: Employers expect qualified workers to be available on demand, most educators have only a vague understanding of the job market, and policymakers propose merely incremental improvements to a system that is wholly outdated.”

Fortune magazine provides a good overview of the issues:

---- “We’ve heard plenty about America’s skills gap across the tech industry, but a skills gap is also hobbling construction — and it’s delaying building projects, shrinking building inventories, and inflating the cost of homes and home-related projects. The knowledge and skills necessary to repair our toilets, install our furnaces and build our houses are dying on the vine. And, unless we want our grandkids growing up in primeval teepees, we need to work quickly to fix it.”

---- “Without skilled workers to replenish a diminishing skilled labor workforce, housing prices will continue to rise, housing inventories will continue to fall, and we’ll pay a growing premium for even the smallest home repairs (until there’s nobody left who knows how to complete them). So, whatever we do to address the skilled labor shortage, it’s imperative that we do something — and that we do something soon. Skilled labor has reached a breaking point, and if we continue to do nothing, our houses — so long as we can afford to keep them — will literally fall to pieces.”

The Associated General Contractors of America (AGC) is the leading association for the construction industry in the US, representing more than 26,000 firms. The organization recently developed a Workforce Development Plan because of serious concerns over future shortages of skilled workers. In the introduction they state:

“As the  construction  industry  emerges  from  a  severe downturn  that  began more  than  eight years ago,  many  firms  report  having  a  hard  time  finding  enough  skilled  workers  to  fill  key  positions.  These workforce shortages may at first seem counter intuitive for an industry that was forced to lay off more than 2 million workers since 2006.  However, these shortages are the consequence of a series of policy, education, demographic and economic factors that have decimated the once robust education pipeline for training new construction workers.

“The  lack  of  a  sufficient  number  of  secondary-school  career  and  technical  education  training programs  across  the  country  means  that  as  the  construction  industry  expands  to  meet  growing demand,  an  increasing  number  of  firms  will  have  a  hard  time  finding  skilled  workers.  Left unaddressed,  these  shortages  will  ultimately  undermine  the  industry’s  recovery  and  impact broader  economic  growth  as  staffing  shortages  lead  to  construction  delays.”

The National Association of Home Builders conducted a detailed survey of its members on the availability of workers and sub-contractors covering the different trades (electricians, plumbers, carpenters etc.) One of the questions was:

Indicate if labor shortages over the past 12 months have had any of the following effects on your business.

Bloomberg Businessweek offered an alarming analysis of the surprising trends:

“Futurists have been saying for a while that the U.S. is hurtling toward a jobless economy, with driverless long-haul trucks and cashier-free brick-and-mortar Amazon stores. Someday, maybe. Right now the problem isn’t too many workers who can’t find jobs. It’s too many jobs that can’t find workers.

“The U.S. economy is going through a sea change in which the main constraint isn’t demand but supply. There’s plenty of consumer demand for goods and services, but companies lack the workers to satisfy it. Workers, in turn, don’t have the tools they need to do their jobs, because business investment in modern machines, software, and buildings has been weak. Government is also to blame: Congested roads, bridges, and ports are evidence of chronic public underinvestment in the infrastructure that supports growth. ‘We’ve moved from a period of cyclical, demand-side recovery to structural, supply-side stagnation,’ says Robert Atkinson, president of the Information Technology and Innovation Foundation (ITIF).”

HomeAdvisor is a nationwide digital home services marketplace providing homeowners with tools and resources for their home repair, maintenance and improvement projects. Their exhaustive report entitled “The Skilled Labor Shortage: Where is the Next Generation of Craftsmen?” spelled out some of the impending problems:

“Construction is expected to add jobs at the second-fastest rate among U.S. industries between 2014 and 2024, according to Bureau of Labor Statistics forecasts, but business owners are struggling to fill open positions. Indeed, while half of HomeAdvisor survey respondents plan to hire one to three skilled laborers in the next 12 months, 76 percent of them feel it will be hard to find those new employees. In all, 93 percent of HomeAdvisor survey respondents expressed belief that their businesses would grow in the next 12 months if not for hiring challenges.”

Negative perceptions of the industry are a major hindrance in attracting young people:

“As Kimmel & Associates, an executive recruiting firm specializing in the skilled labor trade, suggests: Many young people may not want to do the ‘dirty work’ associated with skilled labor jobs. ‘The problem,’ the firm says, ‘seems to stem from a cultural lack of respect for blue-collar work. The presiding conventional wisdom is that young people must earn a four-year college degree to make a good living.’ Nearly half of HomeAdvisor survey respondents agree, indicating that negative stereotypes and a lack of interest are challenges they face in recruiting younger workers into the skilled labor profession.”

A variety of educational paths are available:

“Although the conventional path for people in the building trades—which includes electrical, plumbing, masonry, carpentry, general contracting, landscape contracting, a host of traditional building methods known collectively as the preservation trades, and many related crafts such as furniture making—may once have been to learn from an older family member, the training avenues have multiplied. Today, they include union apprenticeships, trade schools, job centers, two-year associate degrees from community colleges, and four-year university programs that combine hands-on training with academic coursework. Remarkably, the training, in some cases, is absolutely free.”

Scholarships are available for young people with character, passion, and work ethic. One of the most prominent is:

“The mikeroweWORKS Foundation is a 501(c)(3) public charity that rewards people with a passion to get trained for skilled jobs that actually exist. As CEO of the Foundation, Mike Rowe spends a significant amount of time speaking about the country’s dysfunctional relationship with work, highlighting the widening skills gap, and challenging the persistent belief that a four-year degree is automatically the best path for the most people.

“Through its scholarship programs, including the Work Ethic Scholarship Program, the Foundation provides financial assistance to qualified individuals with a desire to learn a skill that is in demand. The Foundation has been instrumental in granting more than $3 million in education for trade schools across the country.”