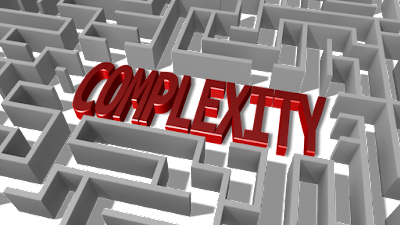 A primary reason some people believe in pseudo-science, pseudo-health and the more outrageous conspiracy theories is the natural aversion toward complexity. Sara E. Gorman, PHD and Jack M. Gorman, MD, write in their 2017 book Denying To The Grave: Why We Ignore The Facts That Will Save Us:

“It isn’t that we are incapable of learning the facts but rather we are reluctant to put in the time and effort to do so. This may especially be the case when science and math are involved because many people believe, often incorrectly, that they are incapable of understanding those disciplines except in their most basic aspects. As we explain when we discuss some aspects of brain function, our minds gravitate naturally to clear and simple explanations of things, especially when they are laced with emotional rhetoric. We are actually afraid of complexity. Our natural instinct is to try to get our arms around an issue quickly, not to obsess or get caught in the weeds about it.


“(This) retreat from complexity is similar to the other reasons for science denial in that it is in many ways a useful and adaptive stance. We would be paralyzed if we insisted on understanding the technical details of everything in our lives.”

“But when making health decisions, the inability to tackle scientific details can leave us prone to accepting craftily packaged inaccuracies and slogans. Scientists, doctors, and public health experts are often not helpful in this regard because they frequently refuse to explain things clearly and interestingly. Scientists seem to waver between overly complicated explanations that only they can fathom and overly simplistic explanations that feel patronizing and convey minimal useful information.”

Understanding the complexity of the human body’s immune system is essential in making an informed decision on whether to vaccinate or not. The average person, no matter how educated, cannot possibly take into account all its elegance and intricacies:

“The human immune system is one of the most beautifully organized systems in the universe, capable of protecting us against the barrage of dangerous microbes we face every second of our lives. But those microbes are also brilliant in their ability to elude and co-opt the immune system in order to cause disease. How vaccines fit into this system ….. is ultimately a very complicated affair.”

The beleaguered person searches the internet, is faced with a deluge of contrary opinions and technical jargon, and often settles for the simplest explanations. Pseudo-health advocates are master manipulators, experts at giving easily understandable accounts, but couching outright lies in alarmist, conspiracy theory, appeal- to- outrage diatribes that can lead to medically harmful outcomes.

In recent years researchers have been coming to the conclusion that autism is for the most part genetic:

“The human genome is dotted with hundreds of autism risk genes. Individually, each gene is usually harmless, and is in fact essential for normal function. This suggests that autism is caused by combinations of genes acting together. Think of genes as being like playing cards, and think of autism outcomes as depending on the entire hand.”

How a number of genes collaborating to cause autism, or any other disease, is beyond the understanding of the average person. Many people will choose the easy way, believing that a poisonous substance in vaccines, thimerosal, causes autism. A number of anti-vaccine web sites cater to people’s emotions and sound the alarm that the medical establishment is out to sicken everyone’s children. The facts prove otherwise:

“The potential impact of thimerosal on autism has been investigated extensively. Multiple lines of scientific evidence have shown that thimerosal does not cause autism. For example, the clinical symptoms of mercury poisoning differ significantly from those of autism. In addition, multiple population studies have found no association between thimerosal and autism, and rates of autism have continued to increase despite removal of thimerosal from vaccines. Thus, major scientific and medical bodies such as the Institute of Medicine and World Health Organization (WHO) as well as governmental agencies such as the Food and Drug Administration (FDA) and the CDC reject any role for thimerosal in autism or other neurodevelopmental disorders. In spite of the consensus of the scientific community, some parents and advocacy groups continue to contend that thimerosal is linked to autism.”

Avoidance of complexity leads many concerned parents to the false belief that adding a toxic substance to the human body is bad for one’s health, rather than in certain cases, medically necessary. An army of microscopic genes in our own body maliciously conspiring to make us sick is much more difficult to grasp. The emotional, easier cause is often chosen, and there are many pseudo-health practitioners out to fan the flames.

Why We Hate Change

Any attempt to change someone’s mind is often a Herculean endeavor and met with much defiance. Resistance is not futile, with apologies to Star Trek’s The Borg. Aside from the ever present big ego and unwillingness to admit being wrong, scientists now have a better understanding on why we have such an aversion to change:

“Neuroscientists also tell us that changing one’s viewpoint on any issue is difficult, in part because staying put on a point of view activates the pleasure centers of the brain whereas making a change excites areas of the brain associated with anxiety and even disgust ….. They found that staying put activated an area of the brain called the ventral striatum whereas changing activated the insula. The ventral striatum ….. is central to the brain’s pleasure response. It is one of the parts of the brain that is routinely stimulated by drugs like alcohol and heroin and lights up in animals and people whenever they are happy ….. By contrast, the insula is activated when someone is anxious or frightened or shown disgusting pictures ….. So changing an opinion is associated with fear, which is precisely what we need to overcome if we are going to change people’s minds from familiar, easy default positions to more complex scientific ones.”

Anyone can put up a good looking website and make all kinds of claims. It is difficult to know what is credible and what is not. One primary guideline is:

“Pay attention to what kinds of sources the articles or information on the website cite. Do they make a lot of claims without citing any sources at all? Unless it’s a purely and explicitly opinion-based website, this is usually a bad sign. If they do cite sources, try to do a little investigation. What kinds of sources are they? Do they simply link to very similar websites with no sources listed? Or do they take you to a wide array of peer-reviewed, scientific journal articles? Also pay attention to how dated the cited material is. Science moves very quickly, and if a website is consistently citing information from many, many years ago, that is a good sign that it is not a reliable source.”

PubMed is a free resource that is developed and maintained by the National Center for Biotechnology Information (NCBI), at the U.S. National Library of Medicine (NLM), located at the National Institutes of Health (NIH).

Penetrating, thoughtful questions are crucial in determining the facts regarding any health issue. The weight of complexity can often be reduced when the right questions are asked. A well-sharpened sword is needed to slice through the weeds of paranoia and misinformation. The post “30 Prying and Probing Questions To Bolster Critical Thinking” is useful in providing thirty such questions. Number 14 reads:

“When I hear or read unsubstantiated hysteria and paranoia – like anti-vaccine or anti-GMO spin – do I suddenly run around like a chicken with its head cut off, or do I calmly, honestly, and intelligently gather all the facts to form a valid and informed opinion? Do I think on issues with my emotions or with my brain?”