Made in America? Sorting Out All the Confusion 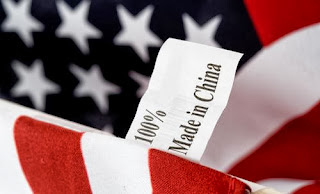 Many American consumers are confused by the often contradictory labelling on some products:


--T-shirts with the label “made in the” with the American flag right below are made in Mexico.

--Frozen blueberries indicating as from Oregon are a product of Chile.

--Pants marked as “authentic, active, outdoor American” are made in Vietnam.

Companies get away with deceptive labeling because the Federal Trade Commission regulations, according to industry insiders, are “blurry” and “subject to interpretation”. Since the late 1990’s the FTC has only fined one company for false claims. In 2006 Stanley Tools was fined $205,000 for misleading claims that their Zero Degree ratchets were made in America, when most of its parts were foreign made.

Marketers also avoid regulations by correctly labelling on the product the country of origin in small print, but place large pictures of the American flag, eagle, or the Statue of Liberty. Others boast of flashy slogans like “true American quality”. There are several imported product lines that unabashedly represent themselves as American:

Some products, especially fresh or frozen fruits and vegetables, as well as fish, are properly labelled but puzzling to the consumer. For example, some salmon brands are marked as both “Product of Thailand” and “wild-caught Alaskan” because the salmon are caught in the U.S. but sent to Thailand for processing, then shipped back to the U.S.

The waters become even more muddied when it comes to some American automobiles. Consider the supposedly American Chevrolet and the Japanese Toyota:

Chevrolet Spark: 10% of the parts are American or Canadian, 75% are from Korea, the automatic transmission is Made in Japan, and it is assembled in Korea.

Toyota Sienna: 75% of the parts, including the engine, are U.S. made and it is assembled in Indiana.

The good news is that 75% of all manufactured products used by Americans are U.S. made. More good news is that the trend of the U.S. importing cheaper goods from China may begin to change. Hal Sirkin, a senior partner with the global-management firm Boston Consulting Group, expects a slightly more level playing field:

“China gets more expensive every year. By 2015, Chinese wages will average $6.15 per hour, still well below the U.S. minimum wage, but American worker productivity is significantly higher. When you consider all the factors, the true cost to manufacture goods from China will only be about 10% cheaper than to make them domestically in another few years.”

The editors, “Made in America?” Consumers Reports, February 2013