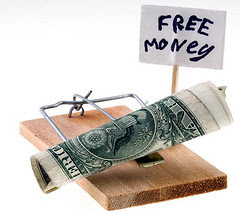 Telemarketers like to prey on people’s desires to “strike it rich” and make easy money. This boiler room investment scam is an almost can’t miss for the smooth talker. The scammer calls random numbers. He identifies himself as a financial advisor. The potential victim is usually not interested and is about to hang up. The scammer tells him he’s not calling to sell him anything but to give him a free inside tip. He names a publicly traded company and tells the victim the stock would go up the next day. The call ends.


Most victims will check the stock the next day out of curiosity. It has gone up. The scammer calls again and gives him the name of a second company. This stock has also gone up. By the third day the victim is more open to talk. The scammer had developed a level of trust.

The scammer then tells him of a pharmaceutical company whose stock is about to explode because it will announce a breakthrough for a major disease. The victim looks it up. It is listed on the NASDAQ. The scammer says he had previously worked in pharmaceutical sales and was following the company’s research closely. The victim is told he was not called randomly but from a list of specific age and income. Investors needed to act quickly before the announcement was made.

Other people are set to make a killing, even the scammer. If the victim is still hesitant, the scammer will ask: “How’s your 401k doing?” This will hit home for many who have suffered recent financial losses. This investment couldn’t possibly be riskier than their unreliable 401k investment. And if this investment doesn’t go up right away, they could wait it out like their 401k.

The victim overnights a check or money order, wires money, or gives their credit card number. Hundreds or sometimes thousands of dollars are sent. The scammer calls back, saying he had received the money, the paperwork is on its way, and to keep his eye on the stock because the announcement is imminent. The stock never explodes and there is no answer when the victim calls the “financial advisor”.

A former investment scammer explains how it’s done: “Let’s say I choose 20 companies at random. Then I call 20 people and give each one a stock to watch. The next day, I check the paper. If the stock I gave you went up, I immediately call you and say: ‘See, what did I tell you?” I do that 2, 3 times in a row and you start to think I’m someone worth listening to. If the stock goes down, I don’t call. It’s easy and effective.”

James Munton & Jelita Mcleod, The Con: How Scams Work, Why You’re Vulnerable, and How To Protect Yourself, Rowman and Littlefield Publishers, 2011