ScamU: Don’t Fall for the Lost and Found Scam 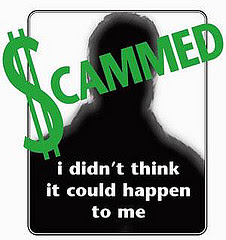 The Lost and Found scam is widely used by con artists and almost never fails. It has many variations but the same basic methods. Here is the restaurant scenario pulled off by a man and a woman.


The woman has eaten in the restaurant hours or the day before. She enters in tears and tells the hostess or cashier that she lost a valuable diamond engagement ring. She immediately gets sympathy and help with the search on the premises. After obviously turning up nothing she leaves, giving her phone number and offering a $500 reward to the person who finds it.

Later the man comes in and has a quick meal. He has a fake but authentic looking diamond ring in his pocket. He approaches the cashier and shows her the ring he “found” on the floor at his table. The cashier acknowledges that someone had recently lost it. He asks if there is a reward. The cashier has the phone number but the man is the one who found it. He offers to split the reward, but can’t hang around because he has to get to work.

Nine times out of ten the cashier offers to buy him out of his share. Usually it’s $100 but sometimes half the $500. She “borrows” the money from the cash register being sure she will return the amount when she gets the reward. Or often she will borrow from co-workers to make up for what she doesn’t have. The man takes the money, gives her the ring, and leaves. The cashier will either phone the woman to collect the $500 reward, or tear up the number and sell the ring later for 5 to 10 times more than the reward. Of course, the phone number turns out to be phony and the ring worthless.

Con artists say they like the adrenalin rush of the con. They are smooth talkers and good actors. They ambush their victims by pressuring them to make a quick decision and tempting them with an opportunity for easy money. Or exploit  a good-hearted person’s sympathy for the distressed person and desire to return the lost valuable item.


James Munton & Jelita Mcleod, The Con: How Scams Work, Why You’re Vulnerable, and How To Protect Yourself, Rowman and Littlefield Publishers, 2011