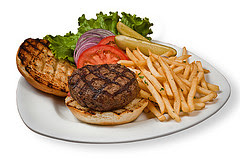 Americans spend $40 billion annually on weight loss products and services. In the last 25 years we have increased our daily calorie intake by 300 calories; our kids have added 200 calories to their day. In 1980 our kids enjoyed only one snack per day. In 2012 the average kid has at least 3 snacks per day.


The food industry’s annual advertising budget is $30 billion. About half of that amount is for soft drinks, snack food and candy. American children view 5,500 food commercials every year. The overwhelming majority of these ads are for foods high in sugar, fat and salt.

One way to lose or maintain a healthy weight is to be aware of the oversized portions being served today compared to the past. Below are 6 examples of average portion sizes. Note that in many cases the 1992 portion sizes were the only option.

Restaurants have greatly impacted the American waistline. One third of our calories are from dining out. That’s twice as many restaurant calories we devoured 30 years ago. According to the USDA, just one weekly restaurant meal adds 2 more pounds to our weight every year. More than 50% of Americans eat out at least 3 times a week.

Many restaurants now offer extreme entrées that would take 4 hours of jogging to burn off. Here are four samples:

4) The most decadent choice of On The Border’s Dos XX Fish Tacos contains 2,100 calories and 130 grams of fat.

Who’s responsible for all these excesses? We are, of course. However, the restaurant industry doesn’t help. When asked about all this decadence, Steven Anderson, president of the National Restaurant Association, replied: “Just because we have electricity doesn’t mean you have to electrocute yourself.”


The US Department of Agriculture provides an excellent web site on healthy eating and what to put on your plate: http://www.choosemyplate.gov/food-groups/downloads/TenTips/DGTipsheet1ChooseMyPlate.pdf