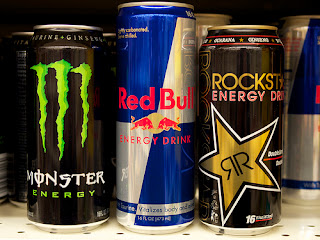 More and more people are fighting fatigue by giving themselves an instant jolt with super-caffeinated energy drinks. In the U.S., this has contributed to a doubling of hospital visits from 2007 to 2011 due to the sometimes harmful effects of these drinks, according to the Substance Abuse and Mental Health Services Administration (SAMHSA). It is not only youth that are consuming energy drinks in large numbers. Surprisingly, the most significant increase in these health emergencies has occurred in people aged 40 and over.

The Center for Science in the Public Interest recently issued a warning about misleading ingredient amounts in some drinks. One example is the popular 5-Hour Energy Drink, which claims that one of their drinks “has about as much caffeine as a cup of premium coffee.” The facts are an 8 ounce cup of brewed coffee normally contains about 95 mg of caffeine. The 1.9 ounce 5-Hour Energy jolt contains 208 mg of caffeine.

Laura Jeffers, Rd, LD, of Cleveland Clinic’s Department of Nutrition Therapy, cautions the problem is not just the amount of caffeine: “It’s scary to me because people can drink these and their body is all of a sudden shocked with a huge amount of caffeine.” Most coffee drinkers take their time enjoying their coffee and don’t give themselves a sudden jolt.

Doctors warn of daily caffeine excess. Most adults can safely consume 200 – 300 mg of caffeine daily. Drinking multiple energy drinks in a single day can be dangerous. So can drinking just 2 or 3 along with other regular caffeinated beverages like coffee or soft drinks. More than 500 mg of caffeine a day can lead to an increase in blood pressure, muscle tremors, lack of sleep, dehydration, nervousness, and an upset stomach. The most vulnerable to these conditions are those with high blood pressure or heart disease. However, people of all ages and conditions have experienced these effects.

In the fall of 2012, the parents of a 14-year-old girl sued the company that produces Monster Energy drinks. She died of cardiac arrest immediately after consuming two 24 oz. cans. The combined total of caffeine in the two cans was 480 mg.

According to Jeffers and most doctors and nutritionists, these drinks won’t solve anyone’s energy crisis: “Caffeine is probably not going to give you a substantial amount of long range energy. Maybe you just need to eat better and get more sleep, and you won’t need that fake fix of energy.”

Comparison of selected energy drinks, other caffeinated beverages and the amount of caffeine in each:

The editors, “Drinks Are No Cure for Your Energy Crisis”, Cleveland Clinic Men’s Health Advisor, April 2013

The editors, “Coffee Quake: Explosion in the Java Aisle”, Nutrition Action Healthletter, May 2013