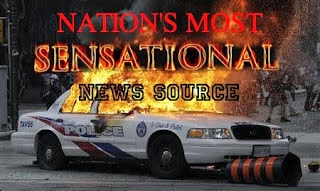 There is little debate over the fact that receiving one’s news of the world and view of the world primarily from TV news can only lead to shallow and one-dimensional perceptions and assessments of what’s going on. Even a superficial scrutiny of this medium will not fail to notice the blatant and deliberate sensationalism used in order to garner ratings. While the media’s obsession with this type of journalism is understandable – readers and viewers are needed or the outlet will close down – it is up to the discerning news consumer to access both more in depth and balanced information from multiple sources. The following are four basic examples of how TV news distorts reality and, as in the fourth example, this can lead to tragic consequences.


------The dramatic and lurid 2011 Casey Anthony murder trial captivated audiences for the 42 days of its duration. ABC had just cancelled the long-running soap operas One Life To Live and All My Children. Now they had something equally as compelling but at a fraction of the budget. During the same period of time, while the murder of one child was being magnified, at least 900,000 children under 5 in the developing world died from preventable illnesses and hunger.

------In his book, Media Mythmakers: How Journalists, Activists and Advertisers Mislead Us, Benjamin Radford gives a glimpse into how TV news can affect people’s perception of the world:

“Television, by its very nature, distorts the reality it claims to reflect and report on. Events are compressed, highlighted, sped up. Thus a person who occasionally watches sports highlights on TV will likely see more home runs and touchdowns than a person who attends local games regularly; television viewers are likely to see more murders than a police detective, more serious car crashes than a tow truck driver, and more plane crashes than a crash investigator.”

------In 1992, now retired TV journalist Guy P. Harrison reported on the devastating effects of Hurricane Andrew on Homestead, Florida. Harrison details the approach he and most TV reporters take when covering such events:

“My cameraman and I sought out the most traumatized and emotional victims to interview because it made better TV. For everything they said on camera, we selected their most dramatic quotes to use in the final reports. For my on-camera stand-up bits, I babbled away while posing in front of the most spectacular scenes of destruction we could find … No attempt was made to present a balanced presentation of Homestead, Florida. We were not trying to be dishonest, but the fact is what we did was misleading to viewers who don’t understand how television news works ….. We wanted to show the absolute worst for dramatic effect. We definitely were not concerned with the median experience of storm survivors. We felt no obligation to show a fair or random sampling of the broad spectrum of destruction. Some houses survived the storm very well. As I recall, however, we didn’t shoot a single one of them.”

------It is not an understatement that the most risky part of commercial flying is the drive to the airport. More than 40,000 people are killed annually on America’s roads in car accidents. After 9/11, many Americans were significantly influenced by the understandable yet relentless media coverage of the attacks.

Statistics show that for the one full year after 9/11 – September 11, 2001 to September 11, 2002, millions of Americans made the choice to drive instead of fly. The direct result was 1,595 more Americans deaths on the roads for that year compared to the normal levels of all the years preceding and following.

In Risk: The Science and Politics of Fear, journalist Dan Gardner crunches the numbers:

“An American professor calculated that even if terrorists were hijacking and crashing one passenger jet a week in the United States, a person who took one flight a month for a year would have only a one-in-135,000 chance of being killed in a hijacking – a trivial risk compared to the annual 1-in-6,000 odds of being killed in a car crash.”

Dan Gardner discusses the negligence of the media: “But car crashes aren’t like terrorist hijackings. They aren’t covered live on CNN. They aren’t discussed endlessly by pundits. They don’t inspire Hollywood movies and television shows. They aren’t fodder for campaign politicians. And so in the months following the September 11 attacks, as politicians and journalists worried endlessly about terrorism, anthrax and dirty bombs, people who fled the airports to be safe from terrorism crashed and bled to death on America’s roads.”