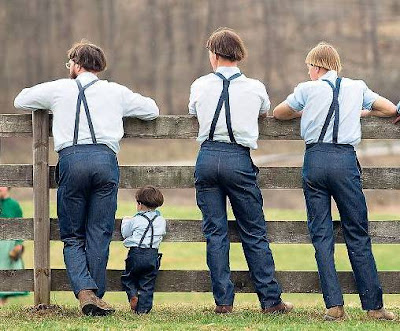 The Amish don’t get autism because they don’t get vaccinated! The headlines shout out from the most debunked health site on the internet, Natural News, anti-vax web sites, various naturopathic sites and most likely your Facebook feed. This thoroughly erroneous view has been gaining traction lately and a perfect example of the misinformation relentlessly spewed out by anti-vaxxers.

What they also espouse is that the Amish rarely get sick – another fib easily discredited. They definitely do have lower incidences of certain cancers compared to the rest of the US population. The reasons for this are obvious – their conservative clothing covers their entire bodies from the beaming sun, they don’t engage in risky sexual behaviors, they eat healthy, get plenty of rigorous exercise, and they certainly don’t smoke or drink.


A study published in the journal Pediatrics clearly establishes that while autism rates are lower in the Amish community than the general population, the rates are significant, and certainly not non-existent, as the anti-vaxxers contend:

The consequences of lower immunization rates in certain Amish communities have led to predictable outbreaks:

“The largest outbreak of measles in recent U.S. history is underway. Ohio has the majority of these cases — 341 confirmed and eight hospitalizations. The virus has spread quickly among the largely unvaccinated Amish communities in the center of the state.”

This has caused many in the community to reassess their views:

“Ervin Kauffman reassures his six children as they squeeze into a small back office for their second shot for mumps, measles and rubella since the outbreak began. While many Amish are not against vaccines in principle, many, including Kauffman's children, have never had shots. ‘I guess there was no scare to us before,’ Kaufman says. ‘I guess we were too relaxed.’

“Kauffman says the outbreak has changed other customs, too. ‘We're just now starting with weddings,’ he says. Spring is the Amish wedding season, a time when hundreds come together, often traveling from other states and sometimes Canada. Those weddings were postponed. Church services, typically held in family homes, were also curtailed. ‘We didn't have church for almost two months because of the measles, so we wouldn't spread them, so we kind of tried to put the clamp on them,’ he says.”

Now let’s examine the concept that the Amish never get sick. The Atlantic recently ran a piece exposing anti-vaxxers and their desperate fabrications:

“Almost all of the roughly 250,000 Amish people in the U.S. can trace their roots back to a few hundred Swiss farmers who immigrated to Pennsylvania in the 18th century. The centuries of isolation and intermarriage has forged tight-knit communities, sure, but it has also caused widespread genetic problems.

“One example is Maple Syrup Urine Disease—so named for the smell of the sufferer’s urine and ear wax—which causes the body to be unable to metabolize protein. Most people with MSUD experience vomiting, seizures, and brain damage starting in infancy, and they die early.

“Only one out of every 180,000 babies in the general population is born with the disease, but it strikes one out of every 358 Amish babies. Treatment usually involves avoiding meat and dairy entirely—which is tough to manage in the ‘all-natural’ Amish lifestyle. Liver transplants are another option, but few Amish can afford them.”

The Clinic for Special Children in Strasburg, Pennsylvania, established by Dr. D. Holmes Morton and his wife in 1989, serves Amish and Mennonite families and is on the cutting edge of genetic research. They have 16 full time staff and 1,083 active patients. Their 2016 Patient Care Stats:

The New York Times went into some depth examining the work of the above mentioned pioneering doctor and his work:

“Dr. D. Holmes Morton stood at the front of the red-and-white-striped tent set up in a farm pasture in Lancaster County, Pa. Behind him were a horse and a buggy -- his host's main mode of transportation -- and a whitewashed barn and silo. To his left was a sunken barbecue pit, with 60 chickens cooking inside a homemade wire-mesh spit. Before him were seven families, upward of 50 people. The women wore bonnets and aprons, the men, long pants and long sleeves, in keeping with their Mennonite ways. Many of the youngest were in wheelchairs. One teenage girl had her left heel in her mouth. A boy was chewing on the handout Morton had distributed. It was two pages long and titled ‘Pretzel Syndrome.’

“The families had gathered here at the Weaver farm on this sticky July afternoon so that Morton could tell them what was wrong with their children. He could not give them a scientific name for their disease, because it did not have one yet. Morton and his team had discovered the existence of this illness only a few weeks earlier. Nor could he tell them how to cure it, or how to ease its symptoms, or what the future held for their kids -- though he said he hoped that would come in time. All he could tell them then was why -- why their children looked different, and had seizures, and could not speak, and died young. Why the youngsters' joints were so elastic that they could rest their feet behind their heads, their bodies twisted like pretzels. The cause, he could say with brand-new certainty, lay in their genes.”

“Although they (the Amish) keep their distance from most technology, they have developed a trust in doctors because they suffer from so much disease. It was also an introduction to their ways of paying for health care. The Old Order Amish do not accept government assistance, and therefore they do not get Medicaid. They also don't carry private insurance but rather rely on the community to cover bills that individuals cannot cover themselves.”

A fairly well balanced look at the vaccine debate by PBS’s Frontline. Both sides are accurately represented. Two highlights: