The 6 Most Toxic Foods 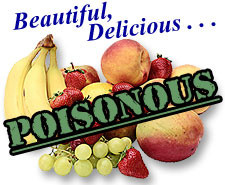 Americans spend 1.2 trillion annually on food. In 2011 the Food and Drug Administration inspected only 6% of U.S. food producers.  According to the Centers for Disease Control and Prevention, every year:

The worst culprit is salmonella, of which illnesses and deaths increased 10% from 2006 to 2010. There were only 2 fresh fruit and vegetable recalls in 2005, 37 in 2011. Children and the elderly are the most vulnerable to contaminated food because of weaker immune systems.

The 6 most toxic foods in recent years:

Researchers recommend thoroughly washing fresh fruits and vegetables. As for eggs, the Safe Handling Instructions on cartons should read: To prevent illness from bacteria: Keep eggs refrigerated, cook eggs until yolks are firm, and cook foods containing eggs thoroughly. The only ways to be cautious with peanut products, most often the contamination being in peanut butter, is to sign up for email safety alerts and recalls at: http://www.fda.gov/Safety/Recalls/default.htm.

The Food and Drug Administration only inspects about 3% of all imported food. Approximately 20% of the foods Americans consume are imported. The most common types of imported food are (% of overall consumption):