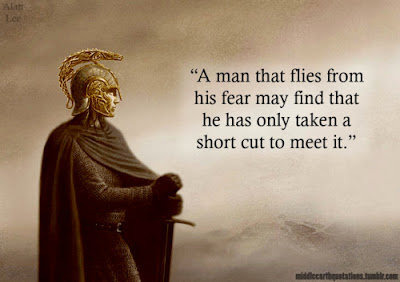 
The more you say, the less people remember. Anatole France

No one tests the depth of a river with both feet. Ashanti

When you get to the end of your rope, tie a knot and hang on. Franklin D. Roosevelt

Do not bite at the bate of pleasure till you know there is no hook beneath it. Thomas Jefferson

If the only tool you have is a hammer, you tend to see every problem as a nail. Abraham Maslow

Most men pursue pleasure with such breathless haste that they hurry past it. S. Kierkegaard

Patience is a bitter plant but has sweet fruit.  German proverb

He that can have patience can have what he will. Benjamin Franklin

Those who do not feel pain seldom think that it is felt.  Samuel Johnson

An hour of pain is as long as a day of pleasure.  English Proverb

There are two tragedies in life. One is to lose your heart’s desire. The other is to gain it. George Bernard Shaw

Americans are like a rich father who wishes he knew how to give his son the hardships that made him rich. Robert Frost

In love, there is always one who kisses and one who offers the cheek.  French proverb

The fellow who will never admit he was wrong really is saying he is no smarter now than he used to be.  Anonymous

We never know the worth of water 'til the well is dry.   English Proverb

Old age is like everything else. To make a success of it, you’ve got to start young. Fred Astaire

Bitterness is like drinking poison and waiting for the other person to die.  Ron McManus

We should cover the faults of others with a cloak of love, because we may need a circus tent to cover our own. Anonymous

If you want to get a true estimate of a person, observe what he does when he has nothing to do. Anonymous

It is amazing what you can accomplish if you do not care who gets the credit.  Harry S Truman

Life is like an onion: you peel it off one layer at a time, and sometimes you weep.  Carl Sandburg

I am convinced that life is 10% what happens to us and 90% how we react to it.  Charles Swindoll

The art of living is more like wrestling than dancing. Marcus Aurelius

In an honest man there is always something of a child.  Plato

An idea isn’t responsible for the people who believe in it. Don Marquis

The trouble with the rat race is that even if you win you’re still a rat. Lily Tomlin

I never give ‘em hell. I just tell the truth, and they think it’s hell. Harry S. Truman

Every man thinks God is on his side. The rich and powerful know he is.  Jean Anouilh

The chains of habit are too weak to be felt until they are too strong to be broken. Samuel Johnson

The most important thing in communication is to hear what isn’t being said.  Peter Drucker

The error is the more dangerous the more truth it contains. Henri-Frederic Amiel

Opportunity is missed by most people because it is dressed in overalls, and looks like work.   Thomas Edison

Most of us would rather be ruined by flattery than to be benefitted by criticism.  Anon

The less a person knows the easier it is to convince him he knows it all.  Anonymous

He who climbs the highest is he who helps others ascend.  Anonymous

The person who is too big for a small job is too small for a big job.  Anonymous

Our faults irritate us most when we see them in others.  Anonymous

You can never be sure what kind of mind a person has until he gives you a piece of it.  Anonymous

The person who uses the loudest voice is usually the one who has the weakest argument.  Anonymous

It is one of the blessings of old friends that you can afford to be stupid with them. Ralph Waldo Emerson

To know how to free oneself is nothing; the arduous thing is to know what to do with one’s freedom.  Andre Gide

Am I ever glad God didn’t answer all my prayers, or I would have married the wrong man seven times.  Ruth Graham

Write down your injuries in dust and your benefits in marble. Benjamin Franklin

Adversity is the state in which a man most easily becomes acquainted with himself, being especially free from admirers then.  Samuel Johnson

There is truth in the high opinion that in so far as a man conforms, he ceases to exist.  Max Eastman