Unhinged: The Left Now As Paranoid As The Right 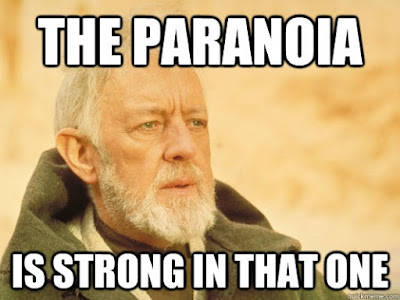 The conservative right has had many in their ranks who believe and espouse all types of wild conspiracy theories. Now it seems many in the liberal left have joined them. The left is now officially as unhinged and paranoid as the right, to the embarrassment of any intelligent and fair-minded American.

Some refreshing honesty was published by the completely liberal, left wing periodical The New Republic. Here are just a few of the theories / beliefs / facts put out by many liberal influencers:


---- To prevent a scandalous tape from being released, Donald Trump had Russian agent Sergei Mikhailov assassinated.

---- When Trump switched a meeting from the National Press Club to the Mayflower Hotel at the last minute, it was because the hotel had a restricted area, and he could meet there in secret with the Russian ambassador, making a deal of Russian oil in exchange for influence in American politics.

---- The Russians had been grooming Trump for ten years, having control over him because they had evidence that could have had him jailed for sex crimes.

---- Trump is secretly laying the groundwork for an American authoritarian dictatorship.

---- The rare time Trump sounds presidential in a speech is actually a ploy for some secretive sinister objective.

---- Russian intelligence orchestrated the Anthony Weiner sex scandal, entrapping him by creating a fake teenage girl profile, placed Clinton emails in his computer, and sent the information to the FBI.

---- Trumps numerous blunders are actually a test to find out how much he can get away with in order to reduce citizen’s basic rights and freedoms.

With the surprising election of Donald Trump, liberals have woken up to a nightmare:

“In a landscape this dystopian, conspiracy offers a salve. It promises an order behind the madness, some sort of rational explanation for the seeming chaos. It validates your paranoia, which paradoxically confirms you’re not paranoid. And most dangerous of all, it affirms your sense that things are hopeless, while absolving you from having to do anything about it. Conspiracy theories may temporarily allay our fear, but they ultimately exacerbate the very conditions that created that fear in the first place.”

Many from both the left and the right fall for conspiracy claims because of anxiety and a loss of control over their environment. Psychological research has discovered that:

“…..individuals who lack control in a situation are more likely to see images that do not exist, develop superstitions, and perceive conspiracies …… The term for this phenomenon is ‘illusory pattern perception,’ and it goes a long way toward explaining the paranoid mind-set. Conspiracists, fundamentally, believe that malevolent order is preferable to chaos. Those who assert that Trump and Steve Bannon are sinister masterminds who secretly control the world from behind the scenes find the prospect more reassuring than the idea that they are rapacious, half-assed con men who have bumbled their way into more power than they can handle.”

These paranoid beliefs are widely shared through social media for obvious reasons:

“It should come as no surprise that Twitter is the medium of choice for left-wing conspiracy theories. As Trump himself has demonstrated, Twitter cares about only one thing: whether content is sensational enough to go viral. Twitter enables conspiracy thinkers to unfold their crazy scenarios in incremental, isolated blasts, each ‘fact’ as disconnected from the others as it is from reality. What matters isn’t the background or experience of the theorists, or whether any of their claims are substantiated. Much like adorable cat GIFs or Ellen DeGeneres selfies, conspiracy tweets play not to our desire to understand the world, but to our deep-seated need to share the things we find most comforting.”

The subtlety and deviousness of conspiracy theories is that you can’t argue against them. Theorists gleefully manipulate people when they “take the standard of evidence that skeptics value so highly and turn it on its head: Extraordinary claims no longer require extraordinary evidence; rather an extraordinary lack of evidence is thought to validate the extraordinariness of the conspiracy.”

Believers in these theories prefer to take the easy way out than take the time and effort to make sense of people and events:

“In other words, it is not the methodology of conspiracy that’s the problem. When paranoid thinking opens up possibilities, it can serve a useful function. The danger comes when conspiracists remain wedded to their theories in the face of conflicting information, when they refuse to do the hard work of confirming and substantiating their own assumptions and beliefs. Woodward and Bernstein did not simply point to a trail of shady campaign contributions and tweet that Nixon was behind it all. They followed the facts, step by painstaking step, all the way to the Oval Office.”

It is very difficult to change the mind of someone devoted to their conspiracies. That action itself would be seen as part of the conspiracy to suppress the so called “truth”. People who cleverly put out these theories know human nature is their ally:

“Conspiracy theories spread like measles: First they infect the weak and vulnerable; then they spread like wildfire among the entire population. Researchers have found that if a person believes in one conspiracy, he or she is more likely to believe in others—even those unrelated to the initial theory. Which is to say, once conspiracy becomes part of our beliefs, it can be harder to see the world as it truly is. Conspiracy depends on a rejection of the world as it appears to be. Once this belief takes root, it becomes harder and harder to differentiate truth from fiction.”