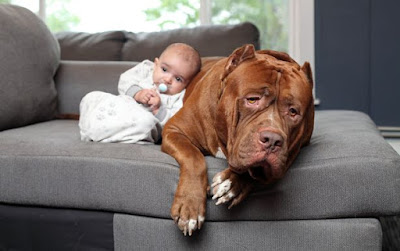 The lie that pit bull advocates and owners like to spread is that all violent and murderous pit bulls are that way because of mistreatment by their owners. This has proven to be false so many times it’s ridiculous. Loving, cuddly, well-behaved pit bulls and other violent breeds have suddenly and unexpectedly turned into murderous savages with little or absolutely no prompting whatsoever. So much for the argument that it is not the dog, it’s the owner. Below are just a small sampling of twenty brutal incidences, which also includes Rottweilers.

“‘My son could sit on him, lay on him, it would never do anything to him’. Julie Wistman is still trying to understand why the dog she’s raised from a puppy attacked and killed her mother in the back yard of her family’s Madison Township home.”

“The Sherriff’s Department and Animal Control said they have not been to the home on any vicious dog calls prior to Saturday’s deadly attack. ‘I’ve never seen them go crazy like that…..’”

“He was the sweetest dog ever. I would never in a million years thought that this would happen.”


“What happened today was really a fluke. I have nephews and nieces play with them all the time and nothing ever happens. And now, they go after a lady….”

“There were no signs or records that Polo was aggressive. Instead, they describe him as a friendly dog.”


“They took Yogi home when he was 7 weeks old and they had him for three years. Not once did he ever do something like this.”


“The family pit bull has been part of the family for 9 years, has never bitten anyone before and was considered a good family pet. The family said it is shocked by the attack.”


“I will do everything in my power to make sure this breed is bred out of existence ……. These pit bulls were not abused, mistreated or harmed in any way.”


“The dog was simply doing what he was trained to do.”


“Chelsea was dog sitting a friend’s pit bull, who was friendly, until he met McKenzie. When he smelled her ……. The dog attacked the little girl.”


“The dog’s owner tells us he was always friendly before this, but wasn’t used to little kids. His name was Bruiser.”


“They were good dogs. We trained them. We taught them all the basic commands. They were very willing to learn. They were socialized with plenty of other dogs. Our friends would bring their dogs over. My friend’s kids would come over and play with the puppies. They were loved. Those dogs were cuddling with me just before Dax showed up at my house that morning.” (3 minutes 45 seconds - 14 minutes 23 seconds)


“They had a dog in the past, that had bitten a family member, that dog was put down immediately. These were responsible pet owners.”


“Police say the family told them the dog had been around the baby since the little girl was born and had never shown any aggression toward the baby or anyone else in the home.”


“I did talk with the father ….. did say that his dog has never acted aggressive and was completely shocked.”


“They are family dogs. They are indoor dogs. They are around kids all the time. Mr. Tucker is shocked that he has had his kids around dogs that are accused of what has happened.”


“Police say the German Shepherd had shown no previous signs of aggression. In fact, it was a therapy dog trained to help its owner deal with Post-Traumatic Stress Disorder …… ‘At no time has it ever posed any problem whatsoever toward the public. It never showed any aggressive tendencies toward anybody or other animals.’”


Questions for the Din family (video below)

“You just have to pay attention. If the dog seems nervous or anxious you make sure the child doesn’t try to grab their face ……. Having their Rottweilers professionally trained is a must, and even then they keep the dogs and kids apart when mom and dad isn’t in the room. First responders agree putting too much trust in a big dog’s kind behavior can be dangerous. ‘In my time on the fire department, when we’ve gone on animal bites, the first thing out of their mind – The dog’s been so sweet their entire life.’”

Can the parents be so attentive that they can instantly block their baby’s sudden movement of the hand grabbing the dog’s face?

If that were to happen, can the parent then instantly remove the dog from the baby’s body part if the bite is so strong, with its jaws and teeth deeply sunk in?

Are the Rottweilers not able to jump over that low fence that is supposed to be protecting the babies?

If the dogs are so dangerous that the babies and dogs are set apart when the parents are not in the room, what rational reason would they take such a chance of something so horrific and catastrophic taking place? Is this not child endangerment?

When there are 300 safer breeds to choose from, why would this family take such a risk? Is the selfish pleasure of owning Rottweilers more important than the real potential of a child’s lifetime disfigurement, trauma, and possible death?

Are Pit Bulls Safe For Kids Under 5? Some Things To Consider Before Adopting This Breed https://www.romper.com/p/are-pit-bulls-safe-for-kids-under-5-some-things-to-consider-before-adopting-this-breed-49364