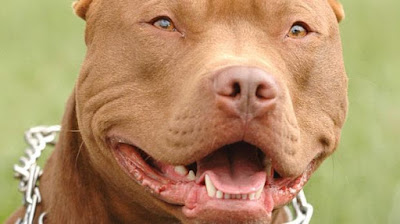 Each of these 20 news stories clearly points out that safe, nonviolent, cuddly family pit bulls and other dangerous breeds, well-bred with no history of aggression, can instantly and unpredictably turn vicious and severely maim, disfigure, and sometimes kill a human being. These 21 stories are just the tip of the iceberg.


No government laws or educational programs have worked or have changed the number of attacks. By agreeing with the status quo pit bull advocates are complicit in all these brutal and savage incidences.

The sad part is that many victims and their families were told by pit bull advocacy groups that the breed is safe, even among children. These groups need to take responsibility for many of the horrific maulings that have devastated entire families.

A pit bull is an animal, not a human being. Every animal should be treated with respect, but a person has infinitely more value than any animal. Most pit bull sympathizers consider animals and humans as equals.

The big questions - How many thousands of people annually is it okay to traumatize, brutalize, disfigure and sometimes murder? How big a body count is enough to convince dangerous dog advocates? Does it have to double? Triple? And just for the selfish pleasure of owning one of the top five most lethal breeds? And when they have 300 other safer breeds to choose from? That is entitlement, narcissism, basic cruelty and inhumanity.

“She had no reason to believe that these dogs would pose any threat at all to her younger brother ………  Child Protection Services knew about the dogs. I think CPS did their job, they did it right, and they did a good job evaluating the living situation and they determined it was a safe environment.”

“The dogs never showed aggression. Ever. They were playing with him all of yesterday and today.”


“It was a family dog. He was playing with the pit bull. He pulled the blanket from the pit bull. And that’s when it attacked his face.”

“The dog is part of the family and a family member turning on their own is an awful thing. A lot of neighbors in the area had children that saw the owners walking the dog and even stopped to pet it ……… People in the neighborhood said the dog was well-behaved.”


“They also say the pet was a loving animal and has never done anything like this.”


“Her little boy loves dogs, and played with Champ, the bull mastiff, hundreds of times before. Only this time, Champ snapped.”


“They said it (American bulldog) was fine with people but not with other dogs ….. Today that bull dog turned on the owner’s one year old baby in that house.”


“Her family said that she had spent time around the pit bull mix for years and the dog had no history of violence…… She had just given pit mix bobo a hug …. They say no one could have seen this coming.”


“The mother told me it was heartbreaking that it was her family’s pets that her daughter played with daily …… ‘The dogs were like family. I’m so grateful to still have my daughter.’”


“The dog is two years old. The family has had it since it was a puppy and the two other children in the family ride it like a horse.”


“A dog Selena and other neighborhood children played with before and never guessed would snap.”


“This dog it did not appear was involved in any previous incidences.”


“Her dogs are family dogs who have never had an issue with her young children or any others.”


“It’s so common for children to get bitten by their own dog that they love and probably never had a problem with ever.”


“The dog has been a family pet for several years and relatives say it has shown no signs of aggression …….. Says her pure bred pit bull Oreo wouldn’t hurt a fly.”

“The police narrative says the dog had never shown any sign of aggression towards the baby and neighbors say they saw them out in the neighborhood together.”


“Taco and the pit bull mix had played together before with no issues.”


“Neighbors say they’ve had no issues with that dog in the past and police say they haven’t received a complaint about that dog until tonight.”