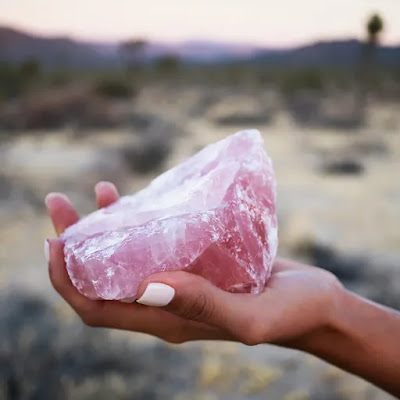 Crystals fascinate and mesmerize - opaque, mysteriously misty, shadowy colors that MUST hold ancient secrets, carved into angels, birds or any object that may imbue meaning, the object of some yoga classes. Thanks to celebrity zeal, the wellness industry and the rise of New Age spirituality, crystals have exploded globally. Hashtags for #crystals run into the millions on Instagram. Even the formation process has its elegance:


“Crystallisation is a transition from chaos to perfection; the evolution of the crystal industry has been less simple. Millions of years ago liquid rock inside the earth cooled and hardened, and this is how crystals formed at the twinkling centre of the earth. Piece by piece they’ve been mined to become the centre, too, of an international industry that hangs on their rumoured metaphysical healing properties. But recently something else has emerged from the rocks – a darker truth.”

Several journalists and media outlets have independently exposed the ugliness behind the lustre.  The Guardian and the New Republic, from where this post is summarized, are just two.

“In 2017, the New York Times heralded ‘the great crystal boom’ and in 2018 Hello! described them as the year’s biggest health and wellness trend. Sold as lamps, sex toys, facial massagers or ‘vaginal eggs’ hawked by Gwyneth Paltrow’s lifestyle empire Goop, there is now a crystal for every possible occasion. As Kim Kardashian was recovering from her robbery at gunpoint in 2016, she embraced healing crystals. The model Miranda Kerr has said that she filters all her skincare products through rose quartz ‘to give the vibration of self-love’ ……. At a New York Fashion Week presentation, Mary-Kate and Ashley Olsen gifted guests ‘black tourmaline to keep negative energies at bay’, and ‘white clear quartz to promote harmony and balance’. Kate Hudson ‘adds a little energy’ to her moisturiser by storing it beside crystals; Adele blamed a bad performance at the Grammys on the fact she’d lost hers.”

Crystals and the power of placebo:

“In 2001 Dr. Christopher French, a psychologist at Goldsmith, set out to test the effects of crystals on 80 volunteers. Half were given a piece of quartz to meditate with, while the rest were given a piece of similar-looking plastic and told it was a crystal. They were also given a booklet explaining 10 of the sensations they might experience, which included tingling, more focused attention, improved sense of wellbeing, a rise in hand temperature and ‘activation of all levels of consciousness’. Out of the 80, only six failed to experience at least one of these sensations. ‘The fact that the same effects were found with both genuine and fake crystals undermines any claims that crystals have the mysterious powers which they are claimed to have,’ said French. Dr. Richard Wiseman, a psychologist at the University of Hertfordshire in Hatfield, added: ‘The power of crystals is in the mind instead of in the crystals. Clearly there is an effect, but people are paying hundreds of pounds for crystals and they might as well pay just a couple of quid.’”

One of the poorest countries in the world, Madagascar is blessed (or cursed) with a treasure trove of these gems. With a population of only 25 million, Madagascar produces as much as India, Brazil and China. “And in a country where infrastructure, capital and labour regulation are all in short supply, it is human bodies rather than machinery that pull crystals from the earth. While a few large mining companies operate in Madagascar, more than 80% of crystals are mined ‘artisanally’ – meaning by small groups and families, without regulation, who are paid rock-bottom prices.”

The Guardian journalist Tess McClure visited a several villages that mine Madagascar’s large rose quartz deposits. Most of the homes have no electricity or running water and the residents live below the $1.90-a-day poverty line. The workers are only paid on average 23¢ a kilo - barely making enough to live on.  McClure spoke to the areas deputy mayor:

“He estimated that from a population of about 10,000 people, up to a quarter of locals now depended on the mines for some income. Between two and four men died each year in the crystal pits surrounding this village, he said – only two last year, but often it was three or four. ‘Sometimes it’s very dangerous but they still mine, because they want money,’ he said. ‘There’s the possibility of landslide, that happens a lot here. The soil falls on them and they die.’

“Landslides are not the only danger for miners. Smashed rocks create fine dust and quartz particles can penetrate deep into the lungs. There, they fester, inflaming surrounding cells, increasing the risk of lung cancer and silicosis. Child labour is also widespread: the US Department of Labour and the International Labour Organization estimate that about 85,000 children work in Madagascar’s mines.”

McClure interviewed a man whose brother had died:

“‘What killed him was digging for stones, about 15 metres deep. He went into a tunnel and it collapsed from above and he was buried – someone called for help: ‘Help! Zafimahatratra is buried down there!’ That’s when I went with his children to dig him up,’ he said.”

McClure also spoke to a widow:

“Benoit was about 55 when he died, said his widow, Josephine Rasondrina, a tiny woman, less than 5 feet tall, with hair neatly divided into braids. She brought out a photograph of him. His features had faded. Josephine gestured at her two granddaughters, about six or seven years old, sitting on the steps. ‘Since my husband died, they stopped going to school. Since my husband died I got really tired.’ She raised her fingers to her temple. ‘I am really tired. Emotionally and physically – because I have to work the field to feed my children.’”

Myanmar, the Democratic Republic of Congo and the Taliban:

“‘Healing crystals’ are mined in places like Myanmar and the Democratic Republic of Congo where mineral extraction is linked to severe human-rights violations and environmental harm.’ In the DRC, seven-year-old children work in the cobalt and copper mines, where covetable ‘healing’ stones such as citrine and smoky quartz abound. International NGO Global Witness found that the Taliban earns up to $20m a year from Afghanistan’s lapis mines, lapis lazuli being, as crystal websites explain, one of the best stones for activating psychic abilities. ‘As with most minerals ……..it is impossible to know for sure if your crystal was obtained via an environmental and human rights horror show.’”

An industry insider on the impossible task of ethical sourcing:

“‘All I can do is ensure that at least quality and genuine crystals are coming into the market. We’re buying from the best possible sources. But sometimes unethical mines are the only sources of the crystals people want. I try to stay as aware of their origins as possible, but I can be concerned about it while also feeling… impotent?’ He shakes his head. ‘Most retailers feel they want to [be ethical], but can’t implement it.’ As we descend from the office into aisles lined with cardboard boxes containing carved angels and jade tumble stones, he tries to elaborate – the market is so huge, the demand is so high, the internet is so vast… But his words tail off.”

Slow rumble of anger and indignation:

“Until retailers are required to prove responsible sourcing and reveal their supply chains …… crystal consumers must acknowledge they’re participating in practices that are having devastating environmental and social impact. ‘The responsibility of companies to address harms to people and planet in their supply chains is gaining increasing traction. Industries selling ‘wellbeing’ that do not make it their business to take steps to ensure they are sourcing their materials responsibly are at risk of accusations of deep hypocrisy.’”

And then there’s Goop:

“Last year, Paltrow faced (and settled) a misleading advertising lawsuit for claiming that Goop’s vaginal egg crystals had the power to balance hormones and regulate menstrual cycles ……. A petition demanding Paltrow’s Goop sell only ethically sourced crystals runs at almost 17,000 names, under the line, ‘No amount of sage can get rid of the bad vibes that come from human exploitation and environmental destruction.’ The growing number of people who use crystals, whether to detoxify, reduce anxiety, or decorate iPhones must acknowledge their healing crystals are likely to have contributed to human trauma or environmental destruction.”

Emily Atkin, Do You Know Where Your Healing Crystals Come From? https://newrepublic.com/article/148190/know-healing-crystals-come-from