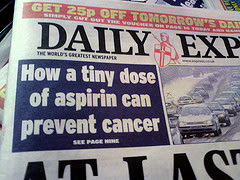 Most media are guilty of it. Disseminating reports and articles on exciting, ground-breaking health research that is a wellness game-changer. Trouble is, the exciting “news” directly contradicts the sensational breakthroughs they reported on just last year. Two blatant examples are the opposing results of scientific research on aspirin and caffeine (detailed below). Other examples are whether vitamin D supplements actually do protect against cancer, or whether red wine is good for you or not.


Most of the sensational health news contradicts entrenched scientific knowledge. Other health stories give the impression that a previously unsettled issue has now been resolved, when the report is just one among many offering its own solitary input.

An exhaustive inquiry by the Columbia Journalism Review discloses that even the most respected science-health writers fall into the trap of sloppy and careless reporting. They mislead their readers “often in ways that can lead to poor health decisions with catastrophic consequences. Blame a combination of the special nature of health advice, serious challenges in medical research, and the failure of science journalism to scrutinize the research it covers.”

Health-care journalism researcher Gary Schwitzer directed a study of 500 health articles published in major newspapers over a period of almost two years. He found that about 2/3 of the articles contained crucial mistakes:

“The errors included exaggerating the prevalence and ravages of a disorder, ignoring potential side effects and other downsides to treatments, and failing to discuss alternative treatment options. In the survey, 44 percent of the 256 staff journalists who responded said that their organizations at times base stories almost entirely on press releases. Studies by other researchers have come to similar conclusions.”

The presumably infallible randomized control trials (RCTs) have been found to not always be so reliable. Bio-statistician and medical researcher John Ioannidis, who heads the Stanford Prevention Research Center, and other researchers, have found that “RCTs, too (even large ones), are plagued with inaccurate findings, if to a lesser extent. Remember that virtually every drug that gets pulled off the market when dangerous side effects emerge was proven “safe” in a large RCT.” Even “peer-reviewed” findings can have major flaws.

A major obstacle to error-free research is that testing some drugs on humans can be dangerous, so animals are used instead, which skews the results when applied to humans. Other mistakes occur when scientists extrapolate their findings because waiting 20 years for comprehensive and conclusive test results is just not feasible.

Respected research journals are often guilty of catering to the most sensational findings:

“If multiple research teams test a treatment, and all but one find the treatment doesn’t work, the journal might well be interested in publishing the one positive result, even though the most likely explanation for the oddball finding is that the researchers behind it made a mistake or perhaps fudged the data a bit. What’s more, since scientists’ careers depend on being published in prominent journals, and because there is intense competition to be published, scientists much prefer to come up with the exciting, important findings journals are looking for—even if it’s a wrong finding.”

The Columbia Journalism Review’s advice to the consumer: “Readers ought to be alerted, as a matter of course, to the fact that wrongness is embedded in the entire research system, and that few medical research findings ought to be considered completely reliable, regardless of the type of study, who conducted it, where it was published, or who says it’s a good study.”

2012 “Daily Aspirin Is Not for Everyone, Study Suggests” (New York Times)

1980 “FDA to Warn on Caffeine Use in Pregnancy” (Washington Post)

1990 “Caffeine Does Not Damage Chances of Pregnancy” (The Independent)

1996 “Coffee Drinkers May be Less Inclined to Suicide” (USA Today)

2011 “Women Who Drink Coffee Are Happier – And Prone to Other Vices, Too. There Must Be A Connection Here” (The Guardian)