Chicken: From Bursting with Flavor to Zero Taste & Infused Fat 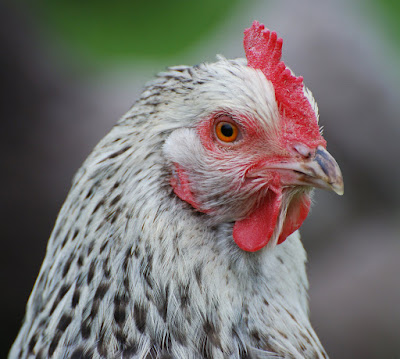 One of the great cookbooks of all time is the 1961 Mastering the Art of French Cooking, co-authored by famous chef Julia Child. The classic book has been reprinted numerous times. In the original edition she pointed out the blandness in the poultry sold at the supermarket:

“Modern poultry-raising has done wonders in making it possible to grow a fine-looking chicken in record time and to sell it at a most reasonable price, but rarely does anyone in the country discuss flavor. If you are interested in price alone, you will often end up with something that tastes like the stuffing inside a teddy bear and needs strong dousings of herbs, wines and spices to make it at all palatable ….. (Chicken) should be so good in itself that it is an absolute delight to eat as a perfectly plain, buttery roast, sauté or grill.”


In his book The Dorito Effect: The Surprising New Truth About Food and Flavor, food journalist Mark Schatzker traces the agricultural history of common foods like strawberries, tomatoes and chicken. More than 60 years ago these foods and many others were naturally bursting with flavor, with very little if any seasonings needed to be added when preparing meals. Ensuing mass farming on a colossal scale unexpectedly bred out the tasty essence right out of the food. Major corporations were forced to add artificial “flavorings” or peddle endless seasonings and high-calorie dressings to compensate for the total blandness assaulting consumer’s palates. Schatzker describes the process:

“When you stop to consider that nearly half of all chicken sold is ‘further processed’ – chicken nuggets, chicken sausage, chicken patties, chicken burgers, chicken strips, chicken cutlets, chicken Kiev – that adds up to a lot of pre-flavoring …. The seasoning arrives by the truckload and is stored in big paper sacks in a kind of flavor warehouse alongside sacks of powdered marinade, breading, and batter. Just tear open a bag and dump it in …. Making a modern chicken taste good requires a flavor solution that calls for three rounds of seasoning that includes recognizable substances like garlic and oregano, unrecognizable substances like MSG or hydrolyzed yeast, and unknowable, secret substances called ‘natural flavors’ or ‘artificial flavors’ …. Using the most sophisticated analytical technology of the era, scientists isolated the mysterious chemicals that humans experience as flavor, and the companies they worked for began manufacturing them and selling them to food companies, which added them to their products.”

The process of pre-flavoring chicken and dozens of other foods has become a major industry all its own. Large companies worldwide own catalogs of at least 50,000 distinct flavorings. More than 1.4 million tons are produced globally. The world’s largest, Givaudan, runs 20 flavor factories. The Givaudan site states:

“From the kitchens of New York to the restaurants of Nagasaki, Givaudan has spent decades on a journey of culinary exploration to ensure that we truly understand the many nuances of chicken flavor, identifying and creating the most natural, rich and authentic flavors imaginable.

“From chicken stocks, soups and bouillons, to grilled, fried, boiled and roasted chicken dishes, we have explored the chicken flavor universe – talking with 7,300 consumers in 14 countries as well as the world’s leading chefs across four continents. Our major investment into science and technology and the TasteEssentials® program has resulted in the creation of new and better performing ingredients. These ingredients are brought together to create breakthrough chicken flavors – capturing the essence, signature and aroma of chicken for all world markets.”

The good news is that genuine, full-flavored chickens are available from some local farmers. They are commonly known as heritage-breed chickens. Mark Schatzker annually buys several of these chickens from a local farmer. When he first served a piece of the authentic chicken to his father, the response said it all: “I haven’t had chicken like that since just after the war.”  A definition of these chickens is from The Livestock Conservancy (see “How To Find and Cook A Heritage Chicken” in the citations):

“They were recognized as an American Poultry Association Standard Breed prior to the mid-20th century, they are naturally mating, they can live a long and productive life outdoors and they have a slow growth rate — meaning they reach market weight in no less than 16 weeks. These are different than industrial-breed chickens – the kind you typically find at a grocery store or restaurant – in price, form, conformation and genetics. They’ll also likely cost quite a bit more than your normal bird – expect to pay anywhere from $5.50 to $10.50 per pound for your heritage chicken – but many cooks and eaters swear by their flavor.”

For today’s discriminating and spoiled palate, it’s not just a dilution of flavor that should be a concern. There are more serious unintended consequences. Not only is today’s mass produced chicken less tasty and less nutritious, but the meat itself contains more fat than it used to. Schatzker writes:

“In 2009, a seminal figure in British nutrition named Michael Crawford, of London’s Institute of Brain Chemistry and Human Nutrition, compared chickens of today with chickens of times past …. Humans aren’t the only ones who are way fatter than they used to be. Back in 1870, a 100 –gram (3 ½ ounce) piece of chicken contained just under 4 grams of fat. By 1970, that number had risen to 8.6 grams, and by 2004 chicken was packing more than 20 grams. As Crawford dryly noted, ‘While chicken was at one time a lean, low fat-food, it is no longer. Does eating obesity cause obesity in the consumer?’”

Schatzker laments that the problem isn’t just with chicken or most fresh fruits and vegetables:

How To Find and Cook A Heritage Chicken  http://modernfarmer.com/2014/03/find-cook-heritage-chicken/