Strange Gleanings From A Conspiracy Cruise 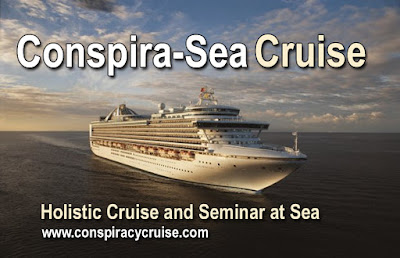 Popular Mechanic’s magazine sent an intrepid reporter for an inside look into the fascinating world of conspiracy cruises. This one took place aboard the Ruby Princess in January 2016. For $3,000 US attendees indulged in a full week of "alternative science". Some of the lectures by conspiracy experts:

--Astral Possession, Psychic Vampirism, and Exorcism
--Gaia-Sophia, Timelines and Global Alchemy
--How to Control the World with Mind Machines
--Are GMOs and Roundup Causing Disease in Millions?

One of the presenters was Laura Eisenhower—great-granddaughter of Dwight. Her homily was on aliens from other planets living among us in disguise. These imposters include prominent U.S. politicians.

New York Times best-selling author Dannion Brinkley told the audience he had died and risen from the dead three times. The first time he was struck by lightning, which sent him on a surreal journey to the great beyond.

Author Leonard Horowitz “theorized the AIDS and Ebola viruses are genocidal weapons engineered by the U.S. government to depopulate the planet through vaccination programs.” He also pontificated that mankind was evil and violent because of the Rockefeller Foundation messing with the universe’s vibrations. World peace could be achieved by tuning all music to a frequency of 528 hertz. The current 440 hertz of standard tuning “aggravates the pineal gland, making all of us emotionally distressed, sicker, and more destructive.”

"I am living a nightmare!" he sputtered, his voice rising like water starting to boil. "Every day of my life is like a roller coaster in The Twilight Zone. But I do this because I will not stand by and watch this genocide!" His eyes began to fill with tears. "I think that people should be able to choose how they are going to die, and not be wiped out by the government!"

A documentary was shown about the Paris terrorist attack on the Bataclan concert hall in November 2015. The sinister, secretive, and multi-layered shenanigans going on are truly mind-bending. A summary of the conspiracy:

“Hollywood super-agent Ari Emanuel (who represents Eagles of Death Metal, the band that was playing at the Bataclan when it was attacked) was in cahoots with the Lagardère Group, a French media conglomerate that had purchased the Bataclan in September 2015. Because Qatar Holding has a stake in Lagardère, and because the government of Qatar has been criticized for tacitly allowing terrorist groups to do their banking in the United Arab Emirates, and because—and this is where they totally lost me—Ari Emanuel is the brother of Rahm Emanuel, the mayor of Chicago, the Horokane believed that Lagardère must have orchestrated the attack with the help of Ari Emanuel.”

The writer concludes with an attempt to get behind the motives and the psychological need for conspiracies:

“The conspiracy community does the same thing. Its emotional power is much stronger than facts. It offers a worldview in which chaos, randomness, happenstance—the messy, frightening qualities of life that science depends upon and our minds find so hard to accept—simply do not exist. For some, a sinister reason for life's disappointments is more satisfying than no reason at all.”

Inside the mind of conspiracy theorists

Two studies published in the journal Applied Cognitive Psychology by Jan-Willem van Prooijen, associate professor in social and organizational psychology at VU University Amsterdam, have concluded that believers in conspiracy theories have one important factor in common: they feel a sense of powerlessness and a lack of control over their lives. According to the Time article:

“Conspiracy theories often crop up during times of uncertainty and fear: after terrorist strikes, financial crises, high-profile deaths and natural disasters. Past research suggests that if people feel they don’t have control over a situation, they’ll try to make sense of it and find out what happened. ‘The sense-making leads them to connect dots that aren’t necessarily connected in reality,’ van Prooijen says. He and his team showed that the opposite is also true: feeling a sense of control is protective against believing conspiracy theories.”  http://time.com/3997033/conspiracy-theories/

Research published in a 2010 issue of the scientific journal The Psychologist found that believers in conspiracy theories “are more likely to be cynical about the world in general and politics in particular. Conspiracy theories also seem to be more compelling to those with low self-worth, especially with regard to their sense of agency in the world at large. Conspiracy theories appear to be a way of reacting to uncertainty and powerlessness.

“Economic recessions, terrorist attacks and natural disasters are massive, looming threats, but we have little power over when they occur or how or what happens afterward. In these moments of powerlessness and uncertainty, a part of the brain called the amygdala kicks into action. Paul Whalen, a scientist at Dartmouth College who studies the amygdala, says it doesn’t exactly do anything on its own. Instead, the amygdala jump-starts the rest of the brain into analytical overdrive — prompting repeated reassessments of information in an attempt to create a coherent and understandable narrative, to understand what just happened, what threats still exist and what should be done now. This may be a useful way to understand how, writ large, the brain’s capacity for generating new narratives after shocking events can contribute to so much paranoia in this country.” http://www.nytimes.com/2013/05/26/magazine/why-rational-people-buy-into-conspiracy-theories.html?_r=1

For those who want to go deep ….. https://conspiracypsychology.com/