Concise Reasons Why 10 Superfoods Are Not So Super 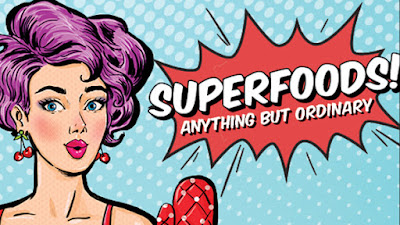 Food marketers are experts at circumventing the intellect in their ravenous attempts to persuade unsuspecting consumers to ravenously buy, buy, and buy. Elevating certain foods to “superfood” status was a stroke of marketing genius. Is there merit to their relentless promotion? Are the claims exaggerated and is the consumer being duped?

1)  Kale has become fashionable and trendy among most health food advocates, and not without reason. It contains plant chemicals that have a fair amount of evidence supporting its ability to fight off lung and gut cancer. However, Brussel sprouts and cabbage contain about the same amount of these healthy compounds. In fact, there are more than 100 unique cancer-fighting plant chemicals contained in the entire family of brassica vegetables. Since there is almost no research on which ones are the most potent, the smart choice would be to equally consume all or most brassicas – cauliflower, broccoli,  turnips and  collard greens, to name a few. Warning – boiling lessens and degrades the cancer-fighting compounds.

2)  Quinoa seeds have been getting some press touting their amazing knack for helping with weight loss and lowering blood cholesterol. Trouble is, the sample sizes in the few studies were so small that no intelligent conclusions can be drawn. What’s worse, most people wash the seeds, effectively removing much of the healthy compounds. Wheat and rice are equally as nutritious.

3)  Blueberries have been the rock stars of the superfood universe. There is some evidence, including a 2012 study of 93,000 women, that these little berries reduce the risk of cardiovascular diseases. The benefits are attributed to a rich supply of flavonoids. However, only a miniscule amount of these flavonoids actually enter the bloodstream, where they do their work. Scientists still haven’t discovered the actual process of the flavonoid’s assault on the evil free radicals. What they do know for sure is that strawberries, raspberries and other red berries are just as “super” as blueberries.

4)  Dark and bitter chocolate has been a welcome addition to the superfood clan, with most rolling out the red carpet in a long-awaited reception worthy of the Royal Family. Cocoa beans contain flavanols which are rumored to “relax blood vessels and regulate blood pressure.” University of Canberra nutrition scientist Duane Mellor, who has spent several years researching cocoa and its benefits, isn’t so sure: “We’ve got some statistical significance. Whether it is actual clinical significance, I’m not convinced.” Another drawback is that food companies see to it that these beneficial cocoa beans are often accompanied by their evil cousins, sugar and fat.

5)  Chia seeds burst onto the health scene boasting higher omega-3 content per 100 grams than oily fish like Atlantic salmon. The oily fish advantage is that its fatty acids are easily broken down and converted in the human body to omega-3 benefits. The acids in chia seeds, on the other hand, have to go through two difficult steps before being broken down, which reduces the amount and potency drastically, some scientists believe up to 90%. Chia seeds can’t beat oily fish for omega-3s but they do contain some and also contain a good amount of fiber.

“Coconut water was compared to a carbohydrate/electrolye beverage, and plain water, in subjects who exercised in the heat. After exercise subjects drank 120% of their fluid loss. There was no significant difference in the amount of hydration achieved, electrolyte levels, or fluid balance.

7) Marketers of wheatgrass insist this superfood is rich in chlorophyll, which is similar to haemoglobin, which are red blood cells that efficiently carry oxygen through your bloodstream. The claim is that chlorophyll-rich wheatgrass will “flood your tissues with oxygen.”  There is possibly no greater superfood nonsense than the wheatgrass phenomena. New Scientist offers a clear and concise explanation:

“Chlorophyll is found in similar concentrations in many green vegetables. More to the point, there is no evidence to support the idea that chlorophyll functions anything like haemoglobin. Even if it did, it wouldn’t get into the bloodstream because chlorophyll gets broken down in the gut.”

8) Green tea proponents zealously proclaim its weight-loss benefits: It tweaks your appetite-regulating hormones and significantly alters and improves how your body metabolizes food and deals with food cravings. Numerous scientific studies have effectively debunked this claim. Just one example:

“The term superfruit, for one, is a marketing term and not recognized by the Food and Drug Administration or US Department of Agriculture. ‘There’s an implication that if I eat one superfruit, it’s the equivalent of eating two fruits,’ says Jeffrey Blumberg, director of the antioxidants research laboratory and professor of nutrition at Tufts University. ‘Americans already do not eat enough fruit. I have nothing against goji berries, I am sure they’re delicious and you should eat them often, but I am reluctant to say that’s all you need to do. Ordinary fruits like apples and bananas are good too.’  http://healthland.time.com/2013/01/10/in-search-of-the-superfruit/

For a perspective on the sly marketing of goji berries, see The Great Goji Berry Con   http://www.mybestbuddymedia.com/2012/11/the-great-goji-berry-con.html

10)  Fruit from the Baobab tree, found mainly in Madagascar and sub-Saharan Africa, contain a nutrient-rich powdery white pulp. Food companies convert it into dry powder to add to and boost any fruit or veggie drink. Clever marketing must have made this relative unknown into a superfood. The actual individual nutrients are many but in very tiny amounts. Marketers tout that there is something special about the way the vitamin C, potassium, etc., works together, but no evidence is provided. A balanced diet of fruit and vegetables make Baobab redundant. All marketing efforts are effective but dishonest.