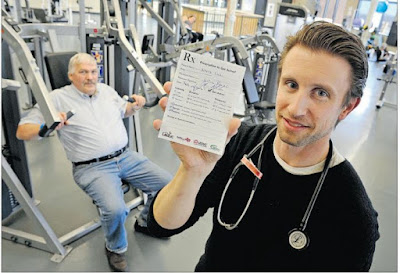 Once again exercise has been in the spotlight with a recent Time cover story. The sad stats are that more than 80 million Americans over the age of 6 get zero exercise. Only 20% get the 150 minutes per week of recommended resistance and cardio exercise. The obvious results are ill health, a lot of suffering and incalculable medical costs.

The downsides of no or very little exercise are well researched and beyond dispute:

“People with low levels of physical activity are at a higher risk for many different kinds of cancer, heart disease, Alzheimer’s disease and early death by any cause. That’s at the end of life. Long before that, inactivity can worsen arthritis symptoms, increase lower-back pain and lead to depression and anxiety – not to mention cause a sallow complexion.”

In recent years the evidence for exercise benefits has been so significant and so precise that many in the field want general practitioners to take note. In the near future doctors will not only be prescribing drugs, but fewer drugs along with a specific exercise plan to help remedy the condition. Marcas Bamman, director of the Center for Exercise Medicine at the University of Alabama, comments: “If you think of exercise as a true form of medicine, which it is, it’s not good enough to just look at a patient and say ‘You need to do more exercise’.”

Dr. Robert Sallis, a family physician and head of sports medicine at California’s Kaiser Permanente Fontana Medical Center, has been doing this since the 1990’s:

“It really worked amazingly, particularly in my very sickest patients. If I could get them to do it on a regular basis – even just walking, anything that got their heart rate up a bit – I would see dramatic improvements in their chronic disease, not to mention all of these other things like depression, anxiety, mood and energy levels.” A leading fitness researcher recently commented that if the amazing benefits of exercise could be put into a pill, “it would likely be the most valuable pharmaceutical ever developed.”

The really good news is that for really busy people, fitness does not have to take a great deal of time:

“The benefits of brief high intensity interval training have been shown time and again to be equal or better than longer steady state aerobic training. For busy people without much time for workouts, several short bursts of intense sprints (running or cycling), each followed by brief respites, are more effective than the conventional wisdom of longer is better.”  http://www.mybestbuddymedia.com/2013/12/fitness-exercise.html

There is also a growing body of evidence that suggests rigorous exercise appears to decelerate aging at the cellular level. It also benefits the skin: “Exercise revs up blood flow to the skin, delivering nutrients to the epidermis and helping wounds heal faster.”

Exercise has also been found to be regenerative for the human brain. “Scientists don’t know exactly why exercise changes the function and structure of the brain for the better, but it’s an area of active research. So far, they’ve found that exercise improves blood flow to the brain, feeding the growth of new blood  vessels and even new brain cells, courtesy of the protein BDNF, short for brain-derived neurotrophic factor. BDNF triggers the growth of new neurons and helps repair and protect brain cells from degeneration.”

There is still some antiquated thinking mulling around that people with heart conditions or Type 2 diabetes should refrain from all exertion. Even working out while pregnant was frowned upon for decades. Things are changing: “Now scientists know that far more people can and should exercise. A recent analysis of more than 300 clinical trials discovered that for people recovering from a stroke, for instance, exercise was even more effective at helping them rehabilitate.”

Older people who are willing to put a little more muscle into their workouts will gleefully notice remarkable paybacks:

“Until now, all the recommendations for increasing bone density have included low-repetition high-weights type of training, says Jinger Gottschall, associate professor of kinesiology at Penn State University. ‘But this just isn’t feasible for a lot of people. You can’t picture your grandma going in and doing that.’ Luckily for Grandma, Gottschall’s team found that lifting lighter weights for more reps improves bone density in key parts of the body, making it a good alternative to heavy lifting.”

The Hard Science on Fitness and the Elderly …..….. http://www.mybestbuddymedia.com/2016/08/the-hard-science-on-fitness-and-elderly.html

Get Rid of That Slouched Posture ….. …….. http://www.mybestbuddymedia.com/2015/11/get-rid-of-that-slouched-posture.html

Natural High: The Effects of Exercise On Depression …….   http://www.mybestbuddymedia.com/2014/02/exercise-depression.html