7 Concise Reasons Why Alex Jones Is A Fraud 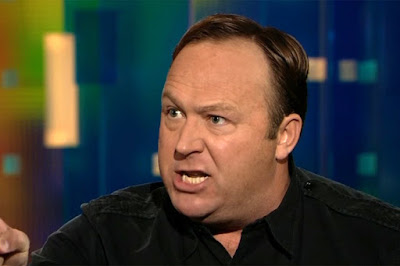 Called by many "America's leading conspiracy theorist", Alex Jones cleverly manipulates people by using outrage to hijack the brain and keep people from fact checking his claims. He makes people so outraged that they’re too angry to verify if what he is saying is true. And when the facts come out – “It’s a conspiracy!” Here are seven primary reasons why he is a fraud – there are more, many more.

1)  Alex Jones displayed his true character when he ranted endlessly about the Sandy Hook tragedy:


“The whole thing is a giant hoax. And the problem is, how do you deal with a total hoax? I mean, it’s just -- how do you even convince the public something’s a total hoax? The general public doesn’t know the school was actually closed the year before. They don’t know they’ve sealed it all, demolished the building. They don’t know that they had the kids going in circles in and out of the building as a photo-op. Blue screen, green screens, they got caught using …… We’ve clearly got people where it’s actors playing different parts of different people. I’ve looked at it and undoubtedly there’s a cover up, there’s actors, they’re manipulating, they’ve been caught lying, and they were pre-planning before it and rolled out with it.”

Jones publicly accused the grieving parents of the Sandy Hook victims of being actors and their murdered children never existed. Is it possible to be more cruel and cold-hearted? Jones influenced many people to harass the parents:

---- Hoaxers tried to delegitimize the identity of one grieving mother, Veronique Pozner. They “quickly scoured family photos on Veronique’s online accounts and began dissecting them for odd shadows or strange poses, suggesting that she had been inserted into the family via Photoshop.”

---- There is nothing sacred for hoaxers. “At one point, they vigorously picked over the details of Noah’s funeral. Prior to the ceremony, the family opened Noah’s casket for a private viewing, which was reported in the news. It’s not an unusual custom for Jewish families, but hoaxers alleged it was against the laws of the religion, which somehow helped substantiate their claim that Noah wasn’t real.”

The Basic Cruelty and Inhumanity of The Sandy Hook Hoaxers: 17 Examples   http://www.mybestbuddymedia.com/2016/10/the-basic-cruelty-and-inhumanity-of.html

Depending on when he said it, why he said it, when he backtracked, when he didn’t, Jones believes most or all of the conspiracy theories. The main one is that George W. Bush either planned the Twin Towers to fall by controlled demolition, or knew about the impending attacks but did nothing, as a pretext for invading Iraq and other potential foreign wars. Each and every theory is thoroughly debunked by a variety of sources. Just one of them is

Even an Average Joe can debunk Jones’ theories

Another concise yet comprehensive source:

3)  Jones shamelessly spews out an endless stream of outright lies and fabrications based on paranoia, fear and unproven conspiracies:

A sampling of actual headlines from Alex Jones’ InfoWars web site. All and more are unsubstantiated, with some being cold-hearted and dehumanizing. The Wikipedia definition for “false flag”: “The contemporary term false flag describes covert operations that are designed to deceive in such a way that activities appear as though they are being carried out by entities, groups, or nations other than those who actually planned and executed them.”

---- 9/11: CIA Likely Built Remote-Controlled Commercial Jets in Aircraft Boneyard – This would explain how 9/11 hijackers were able to ‘fly’ commercial jets with little experience

---- Brussels Attack Was A False Flag! They bring in the terrorists and take people’s liberties when attacks happen

---- US Intelligence Officer: “Every Single Terrorist Attack In US Was A False Flag Attack”

---- Special Report: Why Obama Brought Ebola To US: Only the US government will benefit from a pandemic it created

---- Slow Kill Holocaust: Proof The Government Is Poisoning You – Food is a Weapon and Humanity is Under Siege by Globalist’s Chemical Cocktail

---- New evidence links vaccines and neurological disorders – The opposite happened

---- Central and South America will drop the U.S. dollar as a currency – Didn’t happen

5)  Jones manufactured a “fungal epidemic” and immediately began selling supplements to cure it:

“More recently, Infowars has aired segments about another health problem you’ve probably never heard of: ‘a rarely discussed fungus epidemic [that] is spreading throughout America.’ It’s a useful example of how the site spreads misinformation and denigrates science.

“Instead of actual researchers, the fungus segments feature Infowars associate Dr. Edward Group. Group is not a doctor but a naturopath who also frequently alleges that researchers and mainstream medicine are colluding with government in a mass conspiracy to poison people. He’s said Food and Drug Administration officials raided his office because he was onto a promising cure for cancer.

“To establish this fungus epidemic, Group draws on science — or the feeling of science. He talks about all the research he’s done, and refers to citations from stacks of papers in front of him to support the idea that fungus and yeast overgrowth is causing everything from brain tumors and brain fog to skin conditions, itching, difficulty with vision, anxiety, fatigue, and the obesity epidemic.

“‘It really is a problem most people are not familiar with,’ Group says on the show. The scientific community is deliberately hiding this fungus from view. ‘As a matter a fact, most doctors and hospitals really do not take the time to check people for fungal infections.’

“Not to worry: Group and Jones have the solution. They are peddling supplements called Myco-ZX to fight an epidemic they’ve invented. Group claims the pills cleanse the body and boost the immune system ‘to fight fungal overgrowth.’ These fungus fighters are one of numerous health products hawked on the show.”

6)  Jones is very smart. In our troubled times, he effectively exploits the apprehension and unease people feel when tragic and perplexing events occur, and aggressively offers a simple bandage to soothe people’s angst:

Jones cleverly appeals “to the anxiety, uncertainty and powerlessness felt by people after devastating events like 9/11, Sandy Hook and other major tragedies. Dartmouth College’s Paul Whalen, Professor of Psychological and Brain Sciences, has studied tragic events and their effects on the brain. His analysis is that: ‘… the amygdala jump-starts the rest of the brain into analytical overdrive — prompting repeated reassessments of information in an attempt to create a coherent and understandable narrative, to understand what just happened, what threats still exist and what should be done now. This may be a useful way to understand how, writ large, the brain’s capacity for generating new narratives after shocking events can contribute to so much paranoia in this country.’”

7) Jones is a master psychological manipulator and unequalled conspiracy theorist. However, he uses the deceptive tactics employed by even the most amateur conspiracist:

“One of conspiracy theorists’ most devious methods is to cherry-pick information to back their beliefs and ignore all contradictory evidence. Let’s say there is a significant event that theorists want to exploit. There are 100 generally agreed upon facts concerning the event. Theorists will meticulously look for 5 to 10 facts that seem to have a loose correlation or connection to each other and to previous suspicious events. They will seize on those and delete the 90 to 95 that may raise questions concerning their assertions. They will then present their theories to their followers and say: ‘You see! Look at the connections! What did I tell you?!’”