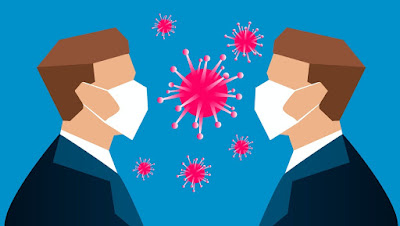 While some “conspiracies” turned out to be true – the 1960’s smoking and cancer denials as one example – the overwhelming majority of these beliefs have no basis in reality, but have human explanations. There is one definite coronavirus conspiracy that is actually true – government officials in China covering up the initial outbreak and allowing thousands of Wuhan residents to fly all over the world. (See the Washington Post link at the end of the article.) There is solid evidence for this, while there is flimsy and unsound “evidence” for 99% of all so called conspiracies. Many people don’t have an honest, objective commitment to facts, truth, and reality. Instead their priority is:


----A spike in the dopamine levels of their brain when they choose to believe.

----Emotional and spiritual bankruptcy is immediately addressed by belief in conspiracy theories.

----A deep-rooted need to boost their often low level of ego, or personal pride.

----A bitter, angry need to “stick it” to anyone or anything they perceive a threat, no matter how far-fetched.

----An innate need for simplicity and easy answers to big issues, a “bogey-man” that is visible and obvious.

Below are just seven hidden motives for coronavirus and most conspiracy beliefs:


Humdrum, dreary lives suddenly come to life when there is suddenly a reason to hate, to battle against, to blame for one’s unhappiness:

“It offers the catharsis of revenge against the supposed perpetrators, or, at least, the gratification of having someone to hate. There’s also the not insignificant thrill that comes from the idea of having a role in a great drama. Most lives are a touch dull. For some, it will be much more exciting to believe that some massive conspiracy is afoot, especially, perhaps, if they have decided that they are its target, a notion that will resonate all the more strongly with the marginalized or the unsuccessful. The former will be eager to put the most malign face possible on those they feel — not always incorrectly — have done them down. The latter would rather turn to the comfort of an alibi than confront the reality that their most formidable adversary is not the Rockefellers or the Illuminati, but, quite often, themselves.”

A tangible explanation, or scapegoat, is needed to provide some sense and consolation:

“Almost all of the conspiracy theory posts linking 5G to coronavirus make use of tired, debunked tropes about non-ionizing radiation, chemtrails and ‘deep state’ plots to use vaccines to control people and remotely shut down their organs. Most of the time, such unsubstantiated and outlandish claims remain more or less hidden inside the communities that believe in them. But with coronavirus as a peg, they were always bound to go viral. ‘The coronavirus has created the perfect environment for this message to spread,’ says Josh Smith, senior researcher at Demos, a think tank. ‘Like many conspiracy theories, the idea that 5G is to blame for the uncertain, frightening situation we find ourselves in is a comfort. It provides an explanation, and a scapegoat, for the suffering caused by this pandemic; as well as—cruelly—suggesting a way we might stop it: take down the masts and the virus will go away.’ If only it were that simple.”

A new, mysterious, high-volume, invisible killer triggers a need for any type of explanation, NOW:

“Conspiracy theories (and, apparently, coronavirus phishing scams) promise answers and explanations people desperately want, but can’t find through normal, factual means. ‘Conspiracy theories in this space of disaster and epidemic get really intense and really serious quickly,’ says Brian Houston, who researches disaster-related mental health and communication. ‘They are so easy to spread because these events are existential. They kill.’ And not in the way that cars or sharks do, either. Coronavirus is scientifically more terrifying. ‘The literature says that the things that tend to scare us the most are risks we can’t observe, and risks that are new and not understandable,’ Houston adds. That describes this new coronavirus to a T.”

The intimacy, horror and meaningless of it all causes some to believe there must be an evil agent behind it, not just some chance event:

“And rarely more so when it involves a new pandemic, an onslaught that is as impersonal as it is intimate. That its deadliness may come from the way an infection may turn the body against itself adds to the existential terror of the afflicted or those waiting for the attack to come their way. That such a horror is both motiveless and meaningless adds insult to mortal injury. Under the circumstances, it’s not much of a surprise that — from the pandemics of the more distant past to the Spanish flu to AIDS to Ebola to COVID-19 — conspiracy theories have trailed in disease’s wake. Many prefer to think that there must be more to such scourges than ‘Mother’ Nature just doing what she does.”

A need to be smarter than everyone else:

“The draw of a conspiracy theory to its followers is reinforced by the perception it gives them that they are in the know. They reckon that they have discovered what the ‘sheeple’ could not, endowing them with a sense of superiority that is as enjoyable as it is undeserved, a fact that hucksters of all stripes have turned to their financial, political, or other advantage over the generations: Sign up with me and I’ll tell you what’s really going on.”

WE are exalted and magnificent – you just don’t get it:

“People have a strong need to feel positive about the groups they belong to as well, such as their nationalities, political parties, and religious groups. A conviction that others conspire against one’s group is more likely to emerge when the group thinks of itself as undervalued, underprivileged, or under threat …… This is captured by the concept of collective narcissism —a form of ingroup positivity that reflects a belief in the ingroup’s greatness associated with a conviction that others do not acknowledge the ingroup’s worth enough.”

These beliefs provide EXCUSES to not comply with difficult and uncomfortable actions needed to combat the virus:

“Downplaying the virus is a way to attempt to deal with the immediate existential threat, but it also serves the purpose of allowing individuals to carry on as normal. A lot of the behaviors that people need to observe to manage the spread of the virus are unpleasant (e.g., staying indoors, not seeing friends), and denying the problem also means that people can avoid these actions.”

“Likewise, conspiracy theories can give their believers a sense of control and security. This is especially true when the alternative account feels threatening. For example, if global temperatures are rising catastrophically due to human activity, then I’ll have to make painful changes to my comfortable lifestyle. But if pundits and politicians assure me that global warming is a hoax, then I can maintain my current way of living. This kind of motivated reasoning is an important component in conspiracy theory beliefs.”


The hypocrisy and deviousness of conspiracy theorists and people against the covid-19 lockdown is so absolutely breathtaking and jaw-dropping it is truly hard to fathom. When citing the total number of covid-19 cases and deaths across the country, they cite the LOWER numbers that are due to the EXTREME lockdown. They are AGAINST the lockdown – which means if they had their way, the number of cases and deaths would be at least ten times GREATER! Yet they cite the lower numbers to bolster their argument! The deviousness and hypocrisy – which includes people like Dr. Phil McGraw – is truly unscrupulous and immoral!

Trail of Deceit: The Ten Most Popular COVID-19 Myths and How They Emerged           https://www.newsguardtech.com/covid-19-myths/

A Rare Conspiracy Theory That is Actually True

China's deadly legacy: The coronavirus cover-up was one of the most grotesque deceptions by a totalitarian government ever  https://www.dailymail.co.uk/news/article-8231467/Chinas-deadly-legacy-exposed-Major-new-series-sorts-coronavirus-conspiracy-theories-facts.html