How To Think Correctly When Receiving A Troubling Diagnosis 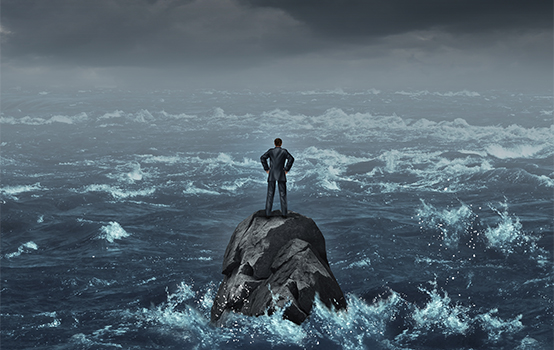 Receiving an alarming diagnosis for a serious health issue will leave anyone perplexed and worried. Diseases are complex and deadly. Suddenly we’re reluctantly catapulted into a potential life and death situation. This makes us demand from our doctors and hospitals that we immediately receive the cure, the remedy, the essential sense of certainty that there are answers and the answers will be implemented and save us. Sadly, the reality is that in spite of near miracle progress in medicine, it wasn’t long ago we were bloodletting to cure diseases. The human body is far too complex and diseases far too insidious and lethal for there to be quick and easy solutions.

Harriet Hall, MD, is a retired Air Force physician, contributor to the blog Science-Based Medicine and coauthor of the textbook Consumer Health: A Guide to Intelligent Decisions. This excerpt from a recent blog post gives an excellent overview and insight on realistic and accurate thinking when facing an overwhelming health crisis:

“When I was practicing medicine, I sometimes had to resort to the diagnosis of IBTHOOM. That stands for It Beats The Hell Out Of Me! It described patients whose symptoms remained unexplained after an appropriately extensive workup. They wanted an answer, and thought if we just did more tests, the answer would become evident. I had to explain to them that we had done all the indicated tests and that further indiscriminate testing would only muddy the waters. How would we even know what tests to choose? Should we x-ray their toes? Do blood tests for polio or chickenpox? Do an exploratory operation to cut their belly open and look around inside? Do a brain biopsy? None of the tests I could think of were indicated or were likely to find a legitimate answer. When the probability of a disease is very low, false positive results are far more likely than true positives. If we did enough tests, we would be sure to find abnormal results on one or more test, results that were meaningless and would only lead to further fruitless diagnostic efforts, including possibly dangerous invasive procedures. I pointed out the good news: we had already done all the appropriate tests, and while we didn’t know what they had, we knew what they didn’t have. No life-threatening problems had been identified; we had confirmed that they were not in any danger.

“At this point, one of three things could happen: the symptoms could improve, get worse, or stay the same. If they improved or went away, it really wouldn’t matter what had caused them. If they got worse, or if new symptoms developed, we could always re-evaluate and do more tests. Serious medical conditions are likely to progress and reveal themselves over time, so progression or new symptoms might give us some valuable clues about what to test. If the symptoms stayed the same, we would be reassured that nothing deadly was threatening and we could do what we were already doing: trying to help the patient cope with the symptoms and maintain quality of life. My patients seemed to understand, accept, and appreciate my explanations. Of course, I retired before the heyday of alternative medicine; today they might reject my advice, seek care elsewhere, and end up in the clutches of a quack who could offer certainty divorced from reality.

“Craving certainty is one of the drivers behind the use of alternative medicine. The mainstream MD tells you that what you have is the common garden variety low back pain that almost everyone gets at some time during their life, that we don’t know what causes it, and that it will subside on its own (50% of cases resolve in in two weeks, 80% in six weeks). All he has to offer is back care advice, pills, and other treatments to keep you a bit more comfortable while you wait for it to run its course. Alternative medicine providers tell you they know exactly what caused it, how to fix it, and how to prevent it from recurring. That certainty is very satisfying to patients. But it’s a false certainty. The acupuncturist says it’s due to a disturbance of qi that he can fix with needles, the chiropractor says it’s due to a subluxation that he can fix with manual adjustments, the naturopath offers dietary advice, supplements, stress reduction advice, etc. There is no agreement, no consensus. They don’t even critique each other. They don’t offer objective truth, only a variety of belief systems.

“The craving for certainty persuades patients to accept bogus diagnoses like chronic Lyme disease, adrenal fatigue, and systemic yeast infections. These pseudo-diagnoses provide a convenient explanation for any number of vague symptoms. After doctor-shopping for years, patients are delighted to find a health care provider who is certain they have ‘the answer.’ Never mind that it is a wrong answer. The provider spends a lot of time with them, has clear treatment plans backed by a bogus but sciencey-sounding rationale, and offers certainty and hope for a cure. They may submit to his quackery for years until the problem spontaneously resolves or until they finally realize they are not getting better under his care. Unfortunately, they may then seek out another quack who is certain about another bogus diagnosis.

“Science doesn’t claim certainty, but probability. When a scientist says vaccines don’t cause autism, the statement is only a convenient shorthand for a more nuanced reality that other scientists understand but laymen don’t. There is no way to absolutely prove that vaccines don’t cause autism, but studies have consistently shown no link between vaccines and autism – not even a correlation, much less causation. The negative evidence has accumulated to the point that it would be perverse to continue to believe vaccines cause autism; yet some perverse people, including some doctors, reject the scientific evidence and continue to trust ideology and anecdote instead of science. ‘My child was diagnosed with autism right after he got the MMR vaccine’ creates a certainty in the parents’ minds that controlled scientific studies can’t compete with.

“Nothing engenders certainty more than personal experience. ‘It worked for me’ sounds very impressive, but it may not be true.  Maybe it worked, but maybe it didn’t. There are lots of other possible explanations. What you experienced was only this: you had a symptom, you tried a remedy, then your symptom went away. It might have gone away without any treatment; it might have gone away because of the treatment or it might have gone away in spite of the treatment, which might have been somewhat harmful. Assuming it ‘worked’ is an example of the post hoc ergo propter hoc logical fallacy, assuming that because Y followed X, X must have caused Y. If you applied that kind of thinking to the rooster who crows just before sunrise, you would conclude that the crowing was what made the sun come up! Things do get better without treatment. Before antibiotics, there were people who survived pneumonia.  Spontaneous remissions occur, even in advanced cancers. Mammography studies have estimated that as many as 22% of breast cancers undergo spontaneous remission.

“The certainty of belief triumphs over the uncertainty and provisional nature of science. Science does not pretend to have final answers or absolute truth or absolute proof. Its conclusions are always provisional, especially in medicine. They are always open to revision when better evidence comes along. That leads some people to distrust science because it seems to be always changing its mind; but that’s a virtue, not a defect. As it responds to better evidence, it corresponds more and more to reality.”

Pseudoscience: the conspiracy against science https://www.skepdoc.info/pseudoscience-the-conspiracy-against-science/

Alex Jones’ Infowars is attempting to profit from the coronavirus outbreak  https://www.mediamatters.org/coronavirus-covid-19/alex-jones-infowars-attempting-profit-coronavirus-outbreak

The Facts On Cancer Survivorship: What The Quacks Don’t Want You To Know http://www.mybestbuddymedia.com/2017/02/good-news-on-cancer-survivorship.html