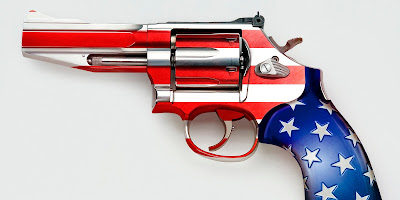 ----Guns exacerbate tense, confrontational situations. There are misunderstandings, people get angry, tempers explode and a moment that can never be taken back often ensues. Instead of just a black eye and a broken nose, the trigger is pulled and serious injury, death, prison, and a lifetime of regret is the inevitable result.


----There has NOT been a drop in crime in the US because more people own guns:

“But even as the belief that we are all future crime targets has taken hold, violent crime rates have actually dropped in the U.S. in recent decades. According to the FBI, rates were a whopping 41 percent lower in 2015 than they were in 1996. The NRA attributes this decrease to the acquisition of more guns. But that is misleading. What has increased is the number of people who own multiple guns—the actual number of people and households who own them has substantially dropped.”

----Laws allowing people to defend themselves with guns don’t work:

“Question:  Did the implementation of Florida’s “stand your ground” self-defense law have an impact on homicide and homicide by firearm between 2005 and 2014?
“Findings:  This study used an interrupted time series design to analyze changes in rates of homicide and firearm-related homicide. We found that the implementation of Florida’s stand your ground law was associated with a 24.4% increase in homicide and a 31.6% increase in firearm-related homicide.
“Meaning:  The removal of restrictions on when and where individuals can use lethal force was associated with a significant increase in homicide and homicide by firearm in Florida.”

“States that have enacted right-to-carry (RTC) concealed handgun laws have experienced higher rates of violent crime than states that did not adopt those laws, according to a Stanford scholar. Examining decades of crime data, Stanford Law Professor John Donohue’s analysis shows that violent crime in RTC states was estimated to be 13 to 15 percent higher – over a period of 10 years – than it would have been had the state not adopted the law.”

----Guns in the home significantly increase the likelihood of homicide and suicide:

Background: Research suggests that access to firearms in the home increases the risk for violent death.
Purpose: To understand current estimates of the association between firearm availability and suicide or homicide.
Conclusion: Access to firearms is associated with risk for completed suicide and being the victim of homicide.

“Firearms cause an estimated 31 000 deaths annually in the United States. Data from the 16-state National Violent Death Reporting System indicate that 51.8% of deaths from suicide in 2009 were firearm-related; among homicide victims, 66.5% were firearm-related. Most suicides (76.4%) occurred in the victims’ homes. Homicides also frequently occurred in the home, with 45.5% of male victims and 74.0% of female victims killed at home.”

----Guns make suicide too easy. Unlike other forms, suicide attempts by gun are almost guaranteed to be fatal:

“Far more people kill themselves with a firearm each year than are murdered with one. In 2010 in the U.S., 19,392 people committed suicide with guns, compared with 11,078 who were killed by others. According to Matthew Miller, associate director of the Harvard Injury Control Research Center (HICRC) at Harvard School of Public Health, ‘If every life is important, and if you’re trying to save people from dying by gunfire, then you can’t ignore nearly two-thirds of the people who are dying.’ Suicide is the 10th-leading cause of death in the U.S.; in 2010, 38,364 people killed themselves. In more than half of these cases, they used firearms. Indeed, more people in this country kill themselves with guns than with all other intentional means combined, including hanging, poisoning or overdose, jumping, or cutting. Though guns are not the most common method by which people attempt suicide, they are the most lethal. About 85 percent of suicide attempts with a firearm end in death. (Drug overdose, the most widely used method in suicide attempts, is fatal in less than 3 percent of cases.) Moreover, guns are an irreversible solution to what is often a passing crisis. Suicidal individuals who take pills or inhale car exhaust or use razors have time to reconsider their actions or summon help. With a firearm, once the trigger is pulled, there’s no turning back.”

----A child dies every second day from an accidental shooting:

“The Associated Press and the USA TODAY Network set out to determine just how many others there have been. The findings: During the first six months of this year, minors died from accidental shootings — at their own hands, or at the hands of other children or adults — at a pace of one every other day, far more than limited federal statistics indicate …… Using information collected by the Gun Violence Archive, a nonpartisan research group, news reports and public sources, the news media outlets spent six months analyzing the circumstances of every death and injury from accidental shootings involving children ages 17 and younger from Jan. 1, 2014, to June 30 of this year — more than 1,000 incidents in all …. They most often happen at the children’s homes, with handguns legally owned by adults for self-protection. They are more likely to occur on weekends or around holidays such as Christmas.”

----Outdated and baseless statistics are used to support defensive gun use. In 1992 two criminologists, Gary Kleck and Marc Getz, conducted a random telephone survey of 5,000 Americans, asking if in the last 12 months they had used a gun in self-defence. Sixty-six incidences were reported. Kleck and Getz then extrapolated this result to the entire country, and estimated that there are 1 to 2.5 million defensive incidents with a gun annually:

“These sorts of biases, which are inherent in reporting self-defense incidents, can lead to nonsensical results. In several crime categories, for example, gun owners would have to protect themselves more than 100 percent of the time for Kleck and Getz’s estimates to make sense. For example, guns were allegedly used in self-defense in 845,000 burglaries, according to Kleck and Getz. However, from reliable victimization surveys we know that there were fewer than 1.3 million burglaries where someone was in the home at the time of the crime, and only 33 percent of these had occupants who weren’t sleeping. From surveys on firearm ownership, we also know that 42 percent of U.S. households owned firearms at the time of the survey. Even if burglars only rob houses of gun owners, and those gun owners use their weapons in self-defense every single time they are awake, the 845,000 statistic cited in Kleck and Gertz’s paper is simply mathematically impossible.”

---- With the overwhelming number of police officers in any big city never firing their gun in their entire career, it begs the question, what are the odds and where is the need for the average person to carry a gun? They are always in relative safety while cops are frequently in confrontational situations. The stats for New York City speak for itself:

“In 2015, the Department continued to experience a decline in discharge incidents. In fact, 2015 was the lowest recording of discharge incidents since official recording began in 1971. In particular, total discharges decreased 40% since 2007, when the new reporting model began, and 15% since 2014. Likewise, the most serious category of discharges (Intentional Discharge–Adversarial Conflict) also mirrors this trend, down 27% since 2007, and 5.7% since 2014. Approximately 35,000 uniformed officers police the City’s 8.2 million residents; of approximately 35,000 uniformed members, 55 Officers were involved in a total of 33 incidents of intentional firearms discharges during adversarial conflict, resulting in 15 injured subjects, and eight killed.

“These data are a testament to NYPD police officers’ restraint, diligence, and honorable performance of duty. They also show that, over the past four decades, attacks on both police and citizens have steadily declined. The drastic reduction in violent crime over the past 25 years is sociologically reflexive: as crime decreases, criminals and police enter into less adversarial conflict.”

----There in fact is, or should be, very few differences between the two sides of the debate.

New York magazine and the non-profit group Narrative 4 recently collaborated on an experiment in radical empathy. Two groups of people were brought to a hotel in New York City. One group was fervently pro-gun, and the other group was anti-gun, primarily because of losing a loved one to gun violence. They were randomly paired and spent time getting to know one another. Each was then to tell the other person’s story to the group as if it was her or his own. Two of the participants were Carolyn Tuft, whose 15-year-old daughter was killed in a mass shooting, and Todd Underwood, who views people who want gun control as completely irrational:

“Nothing else that happened that weekend begins to compare to those 13 minutes, when Carolyn Tuft and Todd Underwood took possession of one another’s stories. Other storytellers were sensitive, respectful, perceptive, and earnest — but none started out so far apart, ideologically, so none was challenged, in quite the same way, to reach for the same level of empathic generosity …. Todd and Carolyn proved that radical empathy is at least possible. They were shape-shifters. They became each other. And in that moment, the videographers were crying. The organizers, who have seen versions of this a hundred times before, were crying. No one in the room that day will ever forget what they saw.

“In that moment, the commonality of experience, the universality of human vulnerability, had been so obvious — and so breathtaking. Everyone in the room was separated not by a deep canyon but by a thin line. The dividing factor wasn’t really beliefs about gun control; it was about fear and how you respond to it. There were those who held to their gun ownership as an instrument of power and security in a world that too often seemed unsafe and uncertain, and there were those who knew too well that nothing on earth can guarantee safety and certainty for the people you love. They had lived through what the others so desperately feared.”