5 Reasons No Civilian Should Own An Assault Rifle 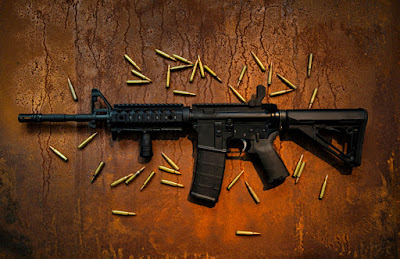 It’s basic common sense that an assault rifle, automatic or semi-automatic weapon is not needed to stop a home intruder. A revolver shooting two or three bullets to the intruder’s chest is more than enough. The fact that the revolver in the home is many times more likely to cause a fatality to a family member by accident or suicide is not the focus here but a pertinent point. People who believe they need several assault rifles to protect themselves from their evil government must know the US Army could wipe them out in 5 seconds – if such a ridiculous scenario would ever take place. Below are five sound and sensible reasons no civilian should own an assault rifle.


Ease of use – One assault rifle owner describes how easy it is:

“When it comes to operating a firearm under pressure — whether it's the stress of combat or the excitement of competition — familiarity and muscle memory are everything. It is impossible to overstate the degree to which this is true. I recently got my hands on a Springfield M1A and I spent my entire first range session with my laptop open to YouTube just trying to figure out how to work the gun and change magazines consistently. The Springfield M1A above is a modernized version of the heavy, wood-stocked service gun that the AR-15 replaced.

“The M1A is an amazing gun (a closely related weapon is actually used by the Marines), but despite the fact that the M1A fires a much larger, deadlier .30 caliber bullet, if I needed to shoot under pressure I'd reach for the smaller AR-15, simply because I can operate that rifle — engage a target, change magazines, troubleshoot and clear a jam — without much thought or effort. I can do all that because the AR-15 is what I know, and it's what I know because it's what everyone else out there knows.”

The AR-15 and similar weapons uses large capacity ammunition magazines that can fire at least 30 bullets without having to reload. The physical effects of each bullet are deadly:

“Tissue destruction of the AR-15 is further enhanced by cavitation, which is the destruction of tissue beyond the direct pathway of the bullet; this occurs with high velocity bullets because their kinetic energies are over 2,500 foot pounds.

“To compare again, a typical 9mm handgun wound to the liver will produce a pathway of tissue destruction in the order of 1-2 inches. In comparison, an AR-15 round to the liver will literally pulverize it, much like dropping a watermelon onto concrete results in the destruction of the watermelon. Wounds like this, as one sees in school shootings like Sandy Hook and Parkland where AR-15s were used, have high fatality rates.”

One Iraq veteran on assault rifles on Main Street:

“There is a reason people like me call semi-automatic rifles assault weapons. The Army trains soldiers to assault targets with them. When I learned small squad infantry tactics during a non-commissioned officer training course, we practiced ambushes and attacks with blanks in our M-16s. We did not assault objectives with bolt-action rifles or handguns; we assaulted them with our semi-automatic rifles and fired numerous rounds to defeat whoever stood in our way. Our weapons matched the tactics of combat…….The weapons used in all of these attacks served their intent: to kill as many people as possible in a short amount of time with a massive amounts of bullets. What happened regularly in Baghdad is now a regular occurrence on Main Street……..

“What is the point: a tool meant for combat situations is widely available in civil society for no apparent reason other than to let civilians feel like they are soldiers. So we wind up with men carrying a legally-purchased weapon of war. No, they are not designed exactly the same, but when the bullet leaves the barrel at subsonic speeds to shred bones and organs, the results are often the same.”

“We examined the data from Mother Jones‘ continuing investigation into mass shootings and found that high-capacity magazines have been used in at least 31 of the 62 cases we analyzed…… In the shooting that injured Rep. Gabby Giffords in Tucson, Arizona, Jared Loughner emptied a 33-round magazine in 30 seconds, killing 6 and injuring 13. Inside a movie theater in Aurora, Colorado, James Holmes used 40- and 100-round magazines to injure and kill an unprecedented 70 victims. At Sandy Hook Elementary School in Newtown, Connecticut, Adam Lanza used high-capacity magazines to fire upwards of 150 bullets as he slaughtered 20 kids and 6 adults.

“’It turns a killer into a killing machine,’ says David Chipman, who served for 25 years as a special agent in the Bureau of Alcohol, Tobacco, Firearms, and Explosives. Outlawing high-capacity magazines won’t prevent gun crimes from happening, Chipman notes, but might well reduce the carnage: ‘Maybe 3 kids get killed instead of 20.’”

Quickly reloading with smaller magazines is not the same:

“Gun rights advocates also commonly argue that mass shooters could kill just as easily by rapidly reloading smaller magazines, and that a ban would make no difference. But such capability requires extensive training under intense conditions, according to Chipman. ‘Anyone who’s been a cop or in the military knows that that’s not something you can do unpracticed,’ he says. The Tucson mass shooting is telling here in another regard: It was only after Loughner had emptied his 33-round magazine and paused to reload that bystanders were able to tackle him and end the carnage.”

We Are Everytown for Gun Safety
https://everytown.org/