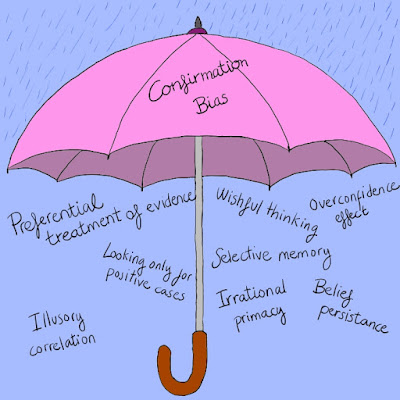 No one is immune from falling into the trap of evaluating a position or an argument using Confirmation Bias as a default lens. I’ll let one thinker phrase it better than I:

“It is a problem that affects everyone. All of us are prone to confirmation biases, and we all should constantly check our views to make sure that we are following facts and logic rather than following what we want to be true. We need to carefully consider evidence rather than blindly latching onto the things that fit our mental narratives. Perhaps most importantly, we should always consider the possibility that we are wrong. Being willing to be wrong is (in my opinion) the only way to break the circle of ignorance. Unless you are actually willing to be wrong, you will never be able to accept evidence that is contrary to your beliefs, and it is important that you are capable
of doing that.”

Below are six devious and shameless ways liars and hustlers actively use or take advantage of Confirmation Bas to influence and retain their followers and/or the public.

Liars and hustlers love the irrational primacy effect – If they can get to you first with their bogus claims, they know they stand a good chance of you continuing to believe them, even in the face of compelling contrary evidence. The victim immediately uses Confirmation Bias to evade solid facts in favor of web sites and gurus that conform to his/her newly formed and unsubstantiated opinions.

For example, someone knows nothing about GMOs and accidentally comes upon a web site or Facebook group that spells out the horrors of GMOs. If he or she believes what they are being told without evaluating the points for the obvious safety of GMOs, then any future information on the subject is seen through the lens of their first impression. Another example is a homeopathy believer taking a pill with no active ingredients and only looking for any physical improvements no matter how small, and disregarding any lack of effect. Typical Confirmation Bias is unconsciously employed.

“When a person must draw a conclusion on the basis of information acquired and integrated over time, the information acquired early in the process is likely to carry more weight than that acquired later …… People often form an opinion early in the process and then evaluate subsequently acquired information in a way that is partial to that. Francis Bacon (1620/1939) observed this tendency centuries ago: ‘the first conclusion colors and brings into conformity with itself all that come after’."

Get Them Into Groups

Liars and hustlers know once they have their targets in the right social groups, ongoing deception is all too easy. Public health advocate and medical journal author Sara E. Gorman, PHD and science author and researcher Jack M. Gorman, MD. write on groups and emotional arousal contributing to Confirmation Bias:

“In his book, Social Networks and Popular Understanding of Science and Health, Brian G. Southwell explores many of the ways in which group membership strengthens an individual’s tendency to adhere to confirmation bias. He points to extensive research showing that when people are provoked to a heightened emotional state they are more likely to share information. When that state is an unpleasant one, like fear or anger, emotionally aroused people come together to seek comfort from each other. ‘Much of the discussion we seek with others in moments of elevated emotion,’ Southwell writes, ‘is not necessarily focused on new factual information sharing as much as it is focused on reassurance, coping with stress, and ritualistic bonding’ …… Strong evidence shows that people are more prone to believe what they are told whenever they are in such a state, whether it is a positive or negative one. That is, regardless of whether we are deliriously happy or morbidly sad, we are likely to believe what we are being told.”

Get Them When They’re Worn Down

Liars and hustlers know people are often fatigued from the stresses of everyday life. This makes them vulnerable to almost any pitch, whether evidence based or not. Sara E. Gorman, PHD and Jack M. Gorman, MD., write:

“Moreover, as Daniel Kahneman and his colleagues have shown through extensive research, the more tired and depleted we are, the more prone we are to relying on easier sources to make decisions and therefore committing confirmation biases. The human brain is an incredible energy-consuming organ, burning glucose for fuel at a higher rate than any other part of the body. When we are tired, hungry, depressed or distracted, it is harder to spend the energy and therefore our mental processes default to the easiest method of reaching a decision. This usually means employing only limbic, or System 1, parts of the brain and therefore leaving us prone to committing errors by using shortcuts like Confirmation Bias.”

Give Them A Dopamine Rush

Liars and hustlers are pros at gifting their targets with a great feeling in order to prime them into accepting what they are being told. Once the product or service is associated with that wonderful feeling, Confirmation Bias flows like the free-flowing Mississippi. Sara E. Gorman, PHD and Jack M. Gorman, MD., write:

“There is a ‘reward’ pathway in the brain that runs from a structure in the brainstem called the ventral tegmental area (VTA) to one deep in the lower part of the brain called the nucleus accumbens ….. The pathway releases the neurotransmitter dopamine whenever we (or almost any animal) anticipates or experiences a rewarding or pleasurable stimulus……

“Confirmation Bias is a part of the way the human brain naturally works. Indeed, we are rewarded for using Confirmation Bias by the powerful actions of dopamine in the pleasure centers of our brains. In other words, it feels good to ‘stick to our guns’ even if we are wrong. When understood in terms of human brain physiology in this way, getting a person to even momentarily shun what she believes in order to attend carefully to potentially disconfirming evidence requires some guarantee that the risk of doing so will produce a reward at least equal to the one she will get by succumbing to confirmation bias.”

Get Them At Their Smugness and Conceit

Liars and hustlers have the most massive egos in the world, and they know almost everyone else has an ego almost as big as theirs. Once the target has been influenced fully or even to a small degree, the ego is there to prevent most from thinking they could actually be wrong. Confirmation Bias then takes over. Pride is the blind spot that makes even a saint stumble. In 1897 Russian novelist Leo Tolstoy wrote:

“I know that most men—not only those considered clever, but even those who are very clever, and capable of understanding most difficult scientific, mathematical, or philosophic problems—can very seldom discern even the simplest and most obvious truth if it be such as to oblige them to admit the falsity of conclusions they have formed, perhaps with much difficulty—conclusions of which they are proud, which they have taught to others, and on which they have built their lives.”

Get Them At Their Discomfort Levels

Liars and hustlers probably have never heard of the term “cognitive dissonance”, but they utilize the psychological term with unrestrained enthusiasm. Anti-vaccine and naturopathy advocates, for example, cannot handle the mental stress experienced when (and if) confronted with overwhelming contrary evidence. Such evidence is avoided at all costs and supportive people and web sites are actively sought. Pseudo-health gurus like Mike Adams (Natural News), Joe Mercola and Gwyneth Paltrow enjoy basking in the knowledge that their snake oil remedies face very little cognitive resistance in the minds of their followers. A basic definition conveys why people resort to Confirmation Bias when things get uncomfortable:

“In A Theory of Cognitive Dissonance (1957), Leon Festinger proposed that human beings strive for internal psychological consistency in order to mentally function in the real world. A person who experiences internal inconsistency tends to become psychologically uncomfortable, and is motivated to reduce the cognitive dissonance. This is done by making changes to justify their stressful behavior, either by adding new parts to the cognition causing the psychological dissonance, or by actively avoiding social situations and/or contradictory information likely to increase the magnitude of the cognitive dissonance.”