James Blunt Wants To Inspire Teens To Be Heroes 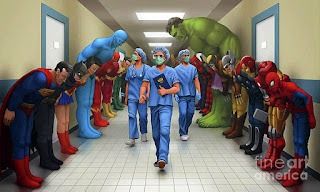 English singer, songwriter and multi-instrumentalist James Blunt was a captain of a NATO peace-keeping force during the 1999 Kosovo War. Later leaving the British army to pursue music, he has since sold over 20 million records worldwide and been nominated and won numerous music industry awards. He raises funds for the medical charity Médecins Sans Frontières (Doctors Without Borders), which he encountered while serving in Kosovo. In 2020 he wrote and released the song “The Greatest” to inspire his children and teens everywhere to become heroes:

"I originally wrote 'The Greatest' for my children as a message of hope for their future, amidst the mad world that we live in. But in the last few weeks the song for me has taken on new meaning, as I watch NHS workers, first responders and healthcare professionals worldwide battling the coronavirus. These people are our true heroes - they are the greatest….."

One group of British teens studying to become doctors have been volunteering at ICU and Covid wards across England. Some of them reported their experiences:

----“I've seen people as young as 21 pass away on our ICU wards. And they had their mother watching them through a FaceTime call as they died …… And that's what I have to try falling asleep to."

----"That's the most difficult part of the job, joking around with the patient as they come into the ICU, and then the next week their dead and you're cleaning their body and pushing them away, unfortunately, down into the morgue."

'The screams keep me awake at night': Hero teens describe life on the Covid frontline https://www.lbc.co.uk/news/the-screams-keep-me-awake-at-night-hero-teens-describe-life-on-the-covid-frontli/

Exposing the Deniers: 10 Quick Points On The Psychology of Vaccine Denial  https://www.mybestbuddymedia.com/2020/04/exposing-deniers-10-quick-points-on.html

Concise Answers To Some Christian’s Fears Of The Covid-19 Vaccine  https://www.mybestbuddymedia.com/2021/06/concise-answers-to-some-christians.html

Con Man Pillow Guy Has The “Cure” For The Coronavirus

The Case For Shaming Those Who Spread Covid-19  https://www.mybestbuddymedia.com/2021/04/the-case-for-shaming-those-who-spread.html