20 Sneaky & Sly Psychological Tricks To Nudge You To Buy More 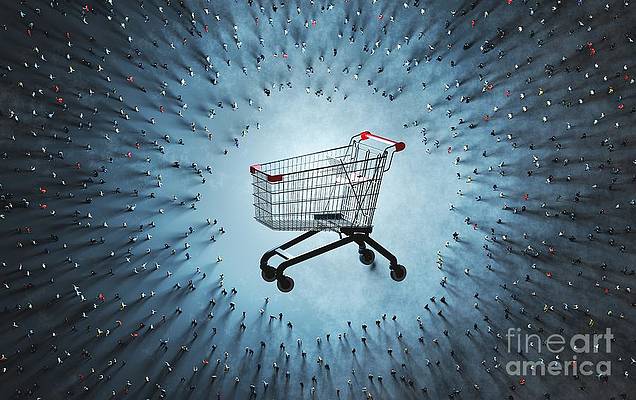 Numerous surveys have shown that about half of all shoppers report they have regretted some of their purchases. Only about 5% said they have never regretted a purchase in their lifetime. Retailers, restaurants and e-commerce sites use a variety of stealth tactics and tricks in order to influence the often-unsuspecting consumer to buy more. Below are twenty of the most prominent. Some are well known, others are surprising, all are legal and sneaky!

----Remove the comma. Consumer research has found that there are more sales when a price looks like $1699. It actually looks cheaper than $1,699.

----Enter the maze. Annoyed shoppers realize the store could have been designed better for faster shopper access to specific goods. The stores want the shopper to wander around and eye as many products as possible. Some supermarkets put the basics like bread, milk and eggs at the back, where the shopper has to pass by hundreds of non-essentials.

----The "Buy one get one free!" offer is a classic that motivates some people to buy when they originally had no intention.

----"Limited time offer!" "Only 10 left in stock!" Sometimes true sometimes not, a sense of urgency makes the potential buyer take a second look.

----Retailers always choose the higher discount numbers. For example, 20% off a $50 product looks much better than a lowly $10 off, even though simple math tells you it's the same price.

----Elevator music! Smooth, laid-back, easy listening music has been proven for decades to influence the shopper to slow down and take the time to shop.

----Supermarkets place the products they have a high mark-up on at eye level, where they will be better noticed. Some major food companies pay extra for this better product placement.

----Cross-selling is used efficiently by Amazon and other e-commerce businesses. The shopper may only have wanted to buy a camera, for example, but right beside it are attractive cases, memory cards and other directly related items. They individually cost less if you buy in a bundle.

----Free samples trigger the taste buds and stimulates the appetite for some. Shopping for food on an empty stomach (or near empty) is never a good idea.

----Coffee shops and bakeries go out of their way to create a powerful, pervasive aroma that is hard to resist.

----Generous return policies stimulate sales because only a fraction of total purchases are returned for a refund. Studies also have shown that when people feel a sense of ownership for something, they are less likely to send it back. The return policies give the consumer a sense of security in case the item doesn't quite work out.

----Candy bars, chips, batteries and a long list of low-cost impulse items are placed beside the consumer as she/he is patiently standing in the check-out line.

----Sneaky vendors will often put a high-priced item next to an unrelated item at its normal, comparatively much cheaper price. Works (almost) every time! In restaurants, if the customer has a choice between a $15 bottle of wine and a $25 one, most customers will choose the lower priced one. However, if a third $45 dollar bottle is added, many will compromise on the price and pick the $25 one.

---- To influence the customers to order desert, most restaurants have mini-standing dessert menus on the table with clear, mouth-watering photos. In some restaurants the dessert table is in a central, visible location where almost everyone can eye it or walk by it.

"The following factors have the biggest influence for clients selecting a dish:

--Identifying the food as local;

--Giving proof that the recipe is made with organic ingredients;

--Items that promote a sense of place;

--Explaining the ingredients in the local language;

"Write down adjectives focusing on smell, taste, texture, or the cooking method:

--Vegetables can range between fresh, earthy, and zesty.

"If you want to minimize the pain associated with paying, there are a few psychological tricks to take your customer’s mind off their wallets:

--Delete any currency signs from the menu. Neuromarketing research shows that seeing just a number makes clients spend twice as much compared to when the list has a currency sign.

--Place the price as close as possible to the name of the dish or the description to avoid price shopping if your items have substantial differences between them.

--Use a smaller font size for the price.

Hair Dyes’ Unknown Risks – Is It Worth It? https://www.mybestbuddymedia.com/2020/06/hair-dyes-unknown-risks-is-it-worth-it.html

How Amazon Is Cleverly Designed To Be Addictive https://www.mybestbuddymedia.com/2020/05/how-amazon-is-cleverly-designed-to-be.html

We’re All FED UP With Contradictory Nutritional Studies https://www.mybestbuddymedia.com/2019/08/were-all-fed-up-with-contradictory.html