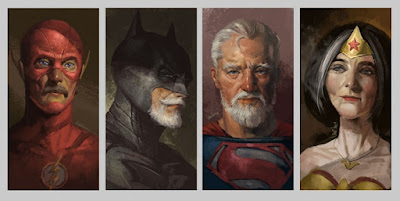 Enter the scammers and con-artists who even swindle the elderly out of their hard-earned money. People's anxiety about their inevitable looming death is fertile ground and open season for those saliva-dripping conscience-free vermin. Nothing is sacrilegious in their unholy world view. The unease of aging is understandable, as we see in this good summary:

"Hearing declines, as does visual acuity. Reflexes are slower; reaction time increases. Strength declines, and bone density decreases. The skin thins and bruises more easily. Wrinkles develop; the hair turns gray and then white. Height decreases by one to three inches. Dementia increases with age, affecting 19 percent of those between ages seventy-five and eighty-four and nearly half of those over eighty-five. Numerous diseases become more common, such as diabetes, cancer, and cardiovascular disease. If they live long enough, almost all men will develop prostate cancer although most of them will die with it rather than because of it."

Below are six of the more common scams and bogus "treatments". The number of commercial products available are too many, so just look for the following words on the labels for the first three examples. The last three are specific companies.

"Rapamycin has been shown to increase lifespan in animals and reduce many of the signs of aging. But it carries serious risks. Also known as sirolimus, rapamycin is a compound originally discovered in the bacterium Streptomyces hygroscopicus from Easter Island. It is an immunosuppressant drug that inhibits activation of T cells and B cells. It has many medical uses, notably to prevent rejection of kidney transplants. Up to 20 percent of patients develop adverse effects, ranging from edema and high blood pressure to infections, lymphoma, and other malignancies."

"Resveratrol (found in red wine) increased the survival of obese mice fed a high calorie diet. Some hoped that resveratrol would allow people to overeat with impunity, but clinical trials in humans were disappointing. The daily dose that was effective in mice would have corresponded to thirty-five bottles of wine for a human. Metformin, aspirin, coffee, alcohol in moderation, curcumin, ibuprofen, and other substances have shown positive results in some studies, but the effects were not strong enough to warrant recommending them for everyone."

"Serovital contains five amino acids (lysine, arginine oxo-proline, N-acetyl cysteine, and L-glutamine) and a powdered herb, Japanese catnip. It claims to raise HGH levels by a whopping 682 percent, but that is based on a single study of only sixteen subjects. Even if it did actually raise HGH levels, there is no evidence of clinical benefit and no evidence that HGH slows aging. Proponents claim that 'boosting HGH blood levels can reduce body fat; build muscle; improve sex life, sleep quality, vision and memory; restore hair growth and color; strengthen the immune system; normalize blood sugar; increase energy; and turn back your body’s biological clock.’ That’s not true, and increased HGH levels can be dangerous. Harmful side effects include an increased risk of cancer and cardiovascular disease. High levels of HGH may even accelerate the aging process."

"PatchMD sells a product that makes antiaging claims for vitamins A, C, D, B3, B6, B9, curcumin, clove extract, ginger root extract, Indian gooseberry extract, L-carnitine, CoQ10, resveratrol, choline, glutathione, NAC, and alpha-lipoic acid. It combines all these in a convenient Anti-Aging Topical Skin Patch, supplying the nutrients via the skin. They claim all these ingredients are backed by science for their antiaging effects, but that’s a real stretch. It’s based mainly on their antioxidant and anti-inflammatory properties. At least they provided a proposed (pseudo-)scientific rationale."

"Vital Stem is advertised as a miracle antiaging remedy. It is a mixture of vitamin D, leucine, blueberries, green tea leaf extract, and L-carnosine. It supposedly increases the body’s production of stem cells. Does it? How could we know? Like those other questionable remedies, it has never been properly tested. To prove that a product increases longevity, it would be necessary to follow a large group of people with and without the product over many years to see if there was really a clinically significant difference. This would be impractical if not impossible. It has not been done and is not likely to be done. To prove that a product has antiaging effects, we would have to have a way to reliably measure those effects. We would need to have a better understanding of what causes aging and show with a good, controlled study that the product produces better clinical outcomes than a placebo."

The Science (and Pseudoscience) of Aging https://skepticalinquirer.org/2021/12/the-science-and-pseudoscience-of-aging/

The Hard Science on Fitness and the Elderly http://www.mybestbuddymedia.com/2016/08/the-hard-science-on-fitness-and-elderly.html