14 Concise & Compelling Reasons We Should All Start Eating ...... Insects 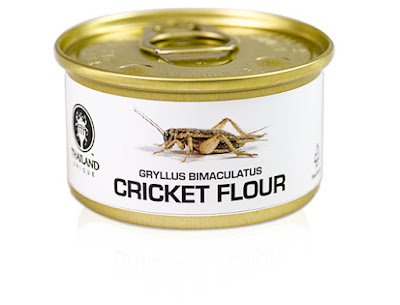 Those tiny, icky bugs may one day be creeping and crawling right onto our dinner plate. Two billion people today regularly eat insects. That’s 28% of the world population. The following are 14 concise and compelling reasons why more of us will and should join the global bug-brimming banquet.

1)  We already eat insects without realizing it:

“The Food and Drug Administration permits a certain amount of insects in food products because it’s practically impossible to keep them completely out. The Food Defect Action Levels outlines the permissible amount of bugs (and other natural contaminants) allowed in food. According to guidelines, pasta may contain an average of 225 insect fragments or more per 225 grams; a cup of raisins can have 33 fruit fly eggs and still make its way to shelves--it’s 34 or more that are unacceptable. While these levels represent limits and the actual amount consumed is probably lower, on average an individual probably ingests about one to two pounds of flies, maggots and other bugs each year without even knowing it.”


2)  Insects are the real super food:

“It is difficult to generalize the nutritional composition, but Rumpold, Schlüter consulted more than 50 literature references. Data from 236 of the more than 2000 edible insect species show that, despite the large variation, they provide satisfactory energy and protein, meet amino acid requirements for humans, are high in monounsaturated fatty acids and polyunsaturated fatty acids, and rich in several minerals and vitamins. Of particular interest is the high iron and zinc content in comparison to conventional meat.

“Species considered for consumption in the western world, like mealworms and crickets, have a protein content ranging from 19 to 22 %. This is comparable to conventional meat products in terms of protein quantification. The essential amino acid levels in the insect species investigated by these authors were comparable with soybean proteins, but lower than for casein.”

3)  We don’t have to eye the creepy crawlies – they can be ground down to a powder and mixed with locally used corn or wheat flour. Just three examples of recent innovations are:

“In California, Bug Muscle is introducing an insect-based high-protein shake aimed at the body-building market. London-based Eat-Ento is another insect food start up working to commercialize powdered insects. And Salt Lake City-based Chapul Cricket Bars of Salt sells energy bars made from All Things Bugs’ high-protein cricket powder. They come in flavors such as the Aztec bar, a coffee-dark chocolate-coffee concoction, the Chaco bar, a standard chocolate and peanut butter combo, and the Thai bar, which features ginger and coconut. Chapul bars are already available at select health food stores.”

“Deep fried locusts taste like popcorn, and when battered taste similar to prawn. Fried crickets have been compared to Doritos, while mealworms taste similar to tamarind and once caramelized can be used as an ice cream topping. The raw witjuti grub tastes like almonds, but after cooking develops a crispy skin like roasted chicken and an inside similar to a fried egg. Some larvae taste like bacon.” https://baldideas.com/2015/05/09/bugs/

5)  There is already a wide world of creative and imaginative cooking. Some of the top insect cookbooks are:

6) More and more restaurants are offering menus with bugs as part of their offerings. California has 19 such restaurants. New York has 11.  For a complete list and links to eateries in the US and Canada, and a partial list globally, see: http://www.bugsolutely.com/the-100-gourmet-bug-restaurants/

“No, not because everyone’s lost their appetite. The authors of the U.N. report (The United Nations Food and Agriculture Organization) suggested that because insects contain a comparable amount of protein with more healthy fats than meat, they could help slow down the worldwide obesity epidemic. In 2008, 1.4 billion adults aged 20 and over were overweight, with about 500 million of these being obese, according to the World Health Organization.

“The WHO suggests young children in low- and middle-income families are especially susceptible to inadequate nutrition and the health risks that go along with it. (You can totally get more chips for 99 cents than you can kale.) Bugs could be a good solution — they’re cheaper to feed and to produce — if farmed on a large scale.”

8)  In the future, insects will be used to fight world hunger and malnutrition. In a comprehensive report, The United Nations Food and Agriculture Organization asserts that insect farming is ''one of the many ways to address food and feed security …. insects are everywhere and they reproduce quickly " They provide superior protein and nutrients when compared with meat and fish and are ''particularly important as a food supplement for undernourished children.”
http://www.cbsnews.com/news/un-agency-urges-eating-insects-to-fight-world-hunger-malnutrition/

“Insects offer important livelihood opportunities for many people in developing countries, including some of the poorest segments of society and particularly women and children. In a post-Rio+20 context, ‘greening’ the economy with forestry – including edible insects – can help redress the social, economic and regional asymmetries and inequalities that still prevail in many parts of the world.”

“Insects, along with other mini-livestock, support diversified markets because they can be sold to consumers across the rural–urban spectrum. In many cases, rural people will sell their mini-livestock within their villages; however, due to their transportability, insects can easily be moved to urban markets by, for example, bus, truck or bicycle. Rearing insects can also be carried out as a complement to other livelihood strategies. Additionally, insect rearing can be done by both landowners and the landless because not much space is required.”

“Housing cattle, swine or chicken in high densities causes stress to the animals, but insects like mealworms and locusts naturally like to live in dense quarters. The insects can be crowded into vertical stacked trays or cages. Nor do bug farms have to be restricted to rural areas; they could sprout up anywhere, from a suburban strip mall to an apartment building. Enterprising gourmets could even keep a few trays of mealworms in the garage to ensure a fresh supply.”

11)   It is better for the environment. Soil erosion and deforestation would be drastically reduced:

“The bigger the beast, the more food, land and water is needed to produce the final edible product, resulting in higher greenhouse-gas emissions. A cow takes 8kg of feed to produce 1kg of beef, but only 40% of the cow can be eaten. Crickets require just 1.7kg of food to produce 1kg of meat, and 80% is considered edible. Insects are also high in protein, minerals and micronutrients.” See the graphic at:

12)  Farming insects instead of animals saves an almost unlimited amount of water.

Crickets, for example, require 13 times less water than cattle to produce an equal amount of protein. This is critical because severe water shortages in the future are inevitable:

“Water is a key determinant of land productivity. A growing body of evidence suggests that a lack of water is already constraining agricultural output in many parts of the world. It is estimated that, by 2025, 1.8 billion people will be living in countries or regions with absolute water scarcity, and two-thirds of the world population will likely be under stress. Increasing demands placed on the global water supply threaten biodiversity, food production and other vital human needs. Agriculture consumes about 70 percent of freshwater worldwide.”

13)  Waste and pollution is significantly reduced:

“Linking back to their efficiency in generating bodyweight, insects also produce less waste, making them easier to farm and more economical. On top of this, the waste that insects do produce is dramatically less harmful. Many large-scale mammal farms generate the waste equivalent of a small city, polluting groundwater and rivers with animal slurry. Agriculture is the leading cause of human induced climate change. Livestock rearing is also responsible for 18% of greenhouse gas emissions, a higher percentage than all transport.

“Bug farms could be the most efficient animal farms out there. Crickets, for instance, require 12 times less food than cattle and half as much as pigs for the same amount of animal protein, because insects are cold-blooded and more efficient at keeping themselves warm. And the food they do get doesn’t have to be top-notch. Bugs can live on ‘organic side-streams’ — like food industry by-products — to help reduce environmental waste. They produce fewer greenhouse gasses, too.

“In addition, insects actually like being confined to tiny spaces. Unlike chickens and cows and other animals who would prefer, we assume, being kept on ‘free-range’ farms, bugs don’t mind being cooped up together in one massive cage. If farmed on the same scale, the U.N. report states insects would require “significantly less” water and land resources than traditional livestock.”

Insects For Food And Feed (Food and Agriculture Organization of the United Nations)   http://www.fao.org/edible-insects/en/