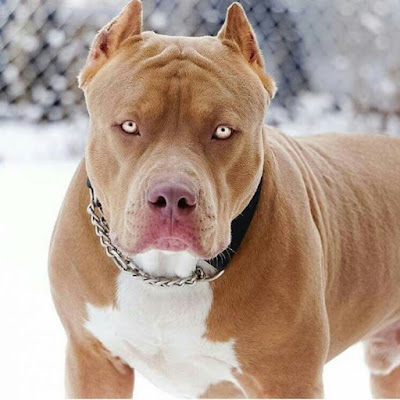 Alexandra Semyonova is an internationally acclaimed animal behaviorist and author of The 100 Silliest Things People Say About Dogs. Academically educated in behavioral science and specialized in animal behavior, she has worked with dogs and their owners on a daily basis for more than 30 years. In an academic paper titled “Heritability of Behavior in the Abnormally Aggressive Dog”, she explains in lay terms how and why aggression is heritable and cannot and has not been genetically bred out of the most violent dogs.

“You will also not prevent the dog from being what he is genetically predisposed to be. Because the inbred postures and behaviors feel good, fitting the body and brain the dog has been bred with, they are internally motivated and internally rewarded. This means that the behavior is practically impossible to extinguish by manipulating external environmental stimuli. The reward is not in the environment, but in the dog itself!........

“The heritability of abnormal aggression in certain breeds of dogs can no longer be denied. We have, first of all, to do with physical conformation. The bodies of these dogs have been selected to be able to execute the killing bite better and more efficiently than other breeds of dogs. These dogs all share a certain physical conformation to the task of killing: the exaggerated jaw muscles, heavy necks and shoulder areas, and body mass that makes defence against an attack much more difficult, often impossible. It remains a fact that if you want a dog who can kill, these are the breeds of choice because they are physically better fit for it than other breeds – no less than the border collie is best fit for herding sheep because of the particular way his body has been shaped by hundreds of years of selective breeding………

“The bodies and brains of all these breeds have, just like the pointer, the husky, the greyhound and the border collie, been selected so that certain postures and behaviors just simply feel good. These dogs will seek opportunities to execute the behaviors they’ve been bred for, just simply because the behavior feels good. The behaviors are internally motivated and rewarded, thus the behaviors are not subject to extinction. Learning and socialization do not play a role and will not prevent the behaviors from appearing. The owner of such a dog might hope that learning and socialization could help the behavior to appear only at appropriate moments, however this is unrealistic. It’s also not realistic to pretend that impulsive aggression is not pathological. The environments (the fighting pit, the baited bull, the escaping slave) for which these behaviors were selected as an adaptive response are so extreme that in fact there is no appropriate context for these behaviors in normal life……..

“Given the scientific proof that is now emerging about the source of the behavior in these dogs, it is time to stop letting the owners of these dogs deny that they could have known the dog would execute a serious to deadly attack. It is time to hold them – and the breeders of such dogs – fully responsible and liable for the risk they choose to take with others’ lives.”


“It’s a good dog. If he sees you he’ll come up to you and play with you ….. Well, he’s nice ……. They were all just sitting in the living room, just playing, and the dog went after the 2-year-old ….. It’s shocking me right now …… The family owned the dog since it was a puppy and there have been no previous incidences where it attacked anyone ….. I think that’s what dogs do sometimes."

“The one-year-old dog was good with the kids and other animals …… The dog involved was adopted out from Asheville Humane Society last month and did not exhibit any aggressive behavior while in our care.”


“Wes recounted how comfortable he felt with his daughter being around Brutus. He showed pictures of his daughter McKenna playing with Brutus and even a picture of Brutus licking his daughter’s face …… She testified to having no problem with her children being around Brutus ……. ‘There’s no evidence that prior to this tragic incident …. that would suggest that Brutus presented a specific unusual or serious danger.’”


“The dog Sparky had been around the home for eight months or so and they had no previous incidences of aggression or anything in those eight months.”


“The dog was a pit bull mix and had been the family’s pet for at least three years …….. ‘Every encounter that BamBam had with Noah showed no signs of aggression. He was most comfortable around Noah.’”


“They thought it was their sweet family dog …… The family told us it was a shock.”


“‘The dog came into my work every day with its owner ……. I was very familiar with this dog …… Everything was fine. We introduced it to our dog slowly’…… Consu instantly took well to his wife and three kids, so he never imagined his good deed would turn out like this.”


“The dog does not have a violent history. In fact, he’s never hurt anyone before …… ‘He belongs with his family. He’s a great dog. He’s very smart. He drives the tractor. He drives the motorcycle.’”


“The victim’s boyfriend describes Achilles as a gentle giant but a guard dog.”


“‘I’m in total shock. Something like this has never happened before. The dogs they’re usually friendly … It’s ironic for something like this to happen’  ……. Family members say the dogs are puppies and have been around the children their whole lives.”


“‘Lacy was rubbing its head.’ The owner stepped away for a second and for whatever reason, the dog bit Lacy’s face twice …… Taylor wants parents and other dog owners to take a look at these pictures of her daughter and hope it reminds them just how unpredictable dogs and children can be …… ‘If a dog owner says they’re friendly, you never know.’”


“The dog has been with the family for a while and has a background in both military and police training. ‘He was trained to be a service dog. He wasn’t trained to be an attack dog.’”


“A girl who visited that home several times in the past and had played with that dog before ….. ‘She leaned in to hug the dog, and the dog bit her in the face.’”

“It was a companion for Smith. ‘The dog actually slept with Mr. Smith. It’s astounding.’”


“The family told the police the dog had never acted aggressively toward anyone in that home.”

“‘I’ve had him for so long and he’s never done anything like that’ …… They’ve had the pit bull for 7 years and it’s never displayed any signs of aggression behavior toward the family.”

“The owners insist the dogs are not dangerous …… The dogs have never gotten out of the fence before and have never bitten anyone ……. ‘We’ve had him around my nephew every day and he’s never hurt anyone before, ever. Never hurt a kid, never hurt anybody.’”

“These dogs have been around children many times before and there have been no problems …… ‘I cannot believe that his two dogs would do that. I’ve seen them around little children with food in their hands and they’ve never had an incident.’”