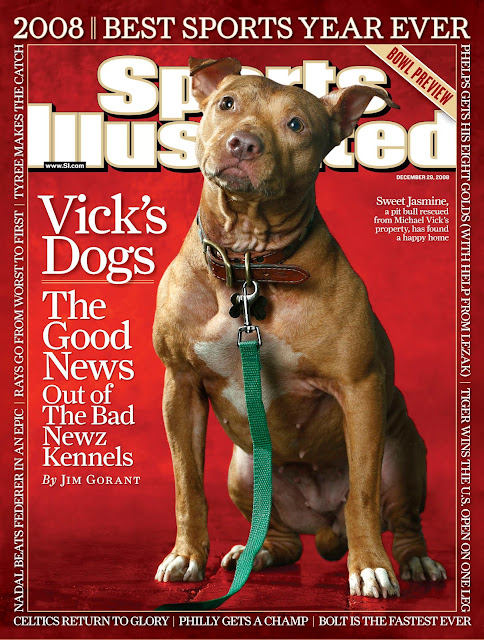 Journalist On How We Came To Love The Pit Bull

“I watched with amazement as the pit-bull population proliferated following Hurricane Katrina in 2005, when thousands of rescues from New Orleans came to all corners of the US, their stories encouraging an uptick in national sympathy. That was soon followed by the arrest of Atlanta Falcons quarterback Michael Vick, for dogfighting and animal abuse. The case created an explosion in pit-bull advocacy by well-resourced institutions such as the Humane Society of the United States. Donations poured in, and the movement became a ‘juggernaut.’

“The blood-drenched statistics followed accordingly. Animals24-7.org, which publishes annual reports on serious human injuries and fatalities by dogs according to breed, says that between 2007 and 2015, ‘2,793 pit bulls and close pit mixes have attacked 1,067 children and 1,189 adults in incidents in which 208 people were killed and 1,891 people were disfigured.’ Rates have only gone up. Virtually all dog bite–related fatalities of domestic animals (including horses and cows) are committed by pit bulls. I’ve stayed with the subject out of sympathy for the victims. It strikes me as preposterous that there are hundreds of websites that cater to pit-bull love—featuring endless photos of dogs dressed in tutus or posed with sleeping babies—but only one serious publication, Dogsbite.org, that is dedicated to giving a voice to the victims of dangerous dogs.”

“I have come to realize that the pit-bull advocacy movement is impervious to reason and evidence. Its core belief is that although other breeds’ behavior is dictated by genetic coding, such as the greyhound’s instinct to run fast or the bloodhound’s instinct to track, only the pit bull will remain immune if socialized carefully. Those who insist that pit bulls are as much prisoners of biology as all other breeds are called racist—when, truly, race has nothing to do with it.

“Inquire about the disproportionate number of attacks on random strangers, and the advocate will say the dog was provoked (as though the jolt of a car door opening unexpectedly could justify assault). Inquire about attacks on family members, and they will insist the dog was not properly socialized. Note the rising number of pit bull–related fatalities in the news, and they will say media is biased. Mention that the police are forced to kill a disparate number of pit bulls, and they will say the police are biased, too, or that animal control officers routinely misidentify breeds—a truly bizarre accusation. In short, reasoning with pit-bull advocates is like bringing a butter knife to a gun fight.”

Myth #1: It's the owner not the breed
Myth #2: It's impossible to identify a pit bull
Myth #3: Human-aggressive pit bulls were "culled"
Myth #4: Fatal attack statistics about pit bulls are false
Myth #5: The media conspiracy against pit bulls
Myth #6: Pit bulls are not unpredictable
Myth #7: Pit bulls do not have a locking jaw
Myth #8: Pit bulls used to be the most popular dog in America
Myth #9: Pit bulls pass the American Temperament Test
Myth #10: Punish the deed not the breed

The no-kill movement has influenced dog adoption mills and shelters across the US and Canada to rename aggressive dogs and rewrite their history, avoiding the violent incidents in the dog’s past. Dog bios focus on the good aspects of the dog’s personality and sanitize their aggression. Thousands of dogs are shipped across state lines and their past erased. Shelter workers admit they don’t know the dog’s history, but their personality is assessed, and that is enough.  (29 minutes 25 seconds – 35 minutes 00 seconds)

“The academic community admits it still doesn’t know what ‘behavior tests’ really measure. They specifically exclude several crucial variables that would give their tests value as risk assessment. They refuse to use field data in developing and assessing validity of their tests. The samples used in developing tests are often biased, as is the outcome the tests aim at achieving. Test developers are not obligated to consider public safety. If the funder wants live release to be the main concern, then the tests are developed to accommodate this wish.

“Shelters play their own role in ‘behavior testing’, often designing their own tests so as to elevate live release rates. They select testers with the same goal in mind, often firing testers and staff who don’t comply. Shelters may report behavior tests in their files, but they don’t tell which test was used, what the training or qualifications of the testers are, or even require any real training or qualification beyond popularity on the work floor. ‘Animal behaviorist’ is not a protected title. Shelters allow any staff that has tested a dog to use this title, and that is legally okay.

“Shelter testing can be useful in assessing risk and matching dogs to adopters, but it is not a scientific activity. At the moment, it is being used to serve other goals than to assess real risk so as to protect public safety and the well-being of shelter dogs. Only the inclusion of all known risk factors, of field data and of longitudinal observations of any individual dog will help remedy this situation.”

“Sherriff Salazar advising everyone to avoid leaving small children alone with dogs, even if that dog is a family pet …… ‘This was a family dog. Even if the dog does not show any outward signs of aggression, sometimes they can be unpredictable. It’s always best to be vigilant when you’re dealing with a small child and a dog like that.’”

“Never leave any child with any large animal, especially large dogs. Even if they don’t show any violent tendencies because a dog can turn at any moment.”
“

“His pet Sage is a sweet dog and this was only an accident.”

“Animal control officials say the owners are responsible, saying they took good care of the dog and there were no prior issues.”

“He was a good dog …… I think he would be an excellent dog for an older couple.”

“Diamond has been with the child’s mother for three years and says this is the first time she’s ever seen the dog act out.”


“The dog would never hurt their children.”

“This was a very friendly dog. All the kids in the family played with him ……. Ted Arnds got the dog from a shelter when it was just a puppy. The dog was around kids all the time.”

“This was a dog that the family had known for years and had never had a problem with.”

“It’s hard for neighbors to imagine how Midnight went from friendly to ferocious in seconds. ‘Midnight was a good dog. I didn’t see no aggression or nothing. It was really shocking to see the dog went from that to that because he’s been around the child his whole life.’”

“He had no choice ….. but to surrender Achilles, the four year old Pit Bull, who had been a member of the Wright family since the puppy was just a few weeks old.”

‘”They assured me this dog is not vicious.’ ‘He’s very gentle and not very temperamental at all.’ ….. They had never known their dog to attack anyone.”

“Her grandson insisted no one could have predicted this. ‘There have been no prior incidences of this.’”

“Davis says his friend has had two of the dogs for years …. ‘They’ve been around small children numerous times. They’ve never had a problem.’”

“This dog was in the family for almost six years. Never attacked a human. Never showed aggression. All of a sudden went for the kill, for my son ……. The animal could be in your life for 20 years, but something in its head can snap.”

“Neighbors in the area said they never thought of the dogs as vicious. But they say the dogs frequently escaped from their fence, and this time, their behavior wasn’t the same.”

“The animal had been with the people in the residence since it was a puppy …… ‘It is a living, breathing animal that can display behavior at any given time that you’ve never seen before.’”