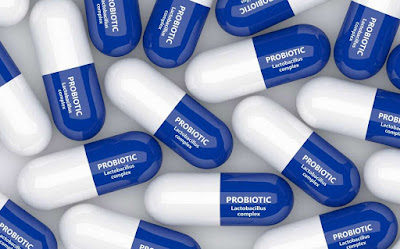 Our gastrointestinal system contains a whopping 39 trillion bacteria! That’s not enough for some, who have become convinced that these trillions need a helping hand. The National Institutes of Health estimates about four million Americans regular take probiotic products. Fermented dairy products such as yogurt were traditionally the only foods containing live bacterial cultures. Consumers are now inundated with probiotic capsules and pills, cereals, juices, even cookies and candy. Do these products have proven health benefits or is it just marketing hype and wishful thinking?


“A closer look at the science underlying microbe-based treatments, however, shows that most of the health claims for probiotics are pure hype. The majority of studies to date have failed to reveal any benefits in individuals who are already healthy. The bacteria seem to help only those people suffering from a few specific intestinal disorders. ‘There is no evidence to suggest that people with normal gastrointestinal tracts can benefit from taking probiotics,’ says Matthew Ciorba, a gastroenterologist at Washington University in St. Louis. ‘If you're not in any distress, I would not recommend them.’ Emma Allen-Vercoe, a microbiologist at the University of Guelph in Ontario, agrees. For the most part, she says, the claims that are made are enormously inflated.’”

“The idea that consuming probiotics can boost the ability of already well-functioning native bacteria to promote general health is dubious for a couple of reasons. Manufacturers of probiotics often select specific bacterial strains for their products because they know how to grow them in large numbers, not because they are adapted to the human gut or known to improve health. The particular strains of Bifidobacterium or Lactobacillus that are typically found in many yogurts and pills may not be the same kind that can survive the highly acidic environment of the human stomach and from there colonize the gut.

“Even if some of the bacteria in a probiotic managed to survive and propagate in the intestine, there would likely be far too few of them to dramatically alter the overall composition of one's internal ecosystem. Whereas the human gut contains tens of trillions of bacteria, there are only between 100 million and a few hundred billion bacteria in a typical serving of yogurt or a microbe-filled pill.”

No Benefits for Healthy Adults

“Seven Randomized Controlled Trials investigating the effect of probiotic supplementation on fecal microbiota in healthy adults were identified and included in the present systematic review. The quality of the studies was assessed as medium to high. Still, no effects were observed on the fecal microbiota composition in terms of α-diversity, richness, or evenness in any of the included studies when compared to placebo. Only one study found that probiotic supplementation significantly modified the overall structure of the fecal bacterial community in terms of β-diversity when compared to placebo. This systematic review of the pertinent literature demonstrates a lack of evidence for an impact of probiotics on fecal microbiota composition in healthy adults.”

“Many other claims are made for probiotics—that they lower cholesterol, alleviate allergic skin conditions (like eczema), treat ulcers and urinary tract infections, improve vaginal health, reduce the risk of colon cancer, ease anxiety and depression, and ward off traveler’s diarrhea. Good evidence to support these claims is lacking. Research on probiotics for weight loss has yielded inconsistent results, and even studies with positive results have mostly found very small benefits, as was seen in an analysis of 15 clinical trials in Obesity Reviews in 2018.”

No Certainty You Get What’s Indicated On The Label

“Just because some probiotics can treat ailments doesn't mean that the probiotics in your grocery store will be effective. In the United States, probiotics are regulated as food or supplements, not pharmaceuticals, so none of the wild claims on their packaging need to be backed up by evidence. Many of the probiotics sold in stores have never even been studied in humans.

“As Pieter Cohen, a professor at Harvard Medical School who studies supplements, told me: ‘The problem is that if anything is sold as a dietary supplement, who knows what's actually in it.’ He added, ‘There is likely a role for probiotics, but until the laws are reformed so we're assured what's on store shelves, we can't trust that what's on the label is found in the bottle.’

“Yogurt is a perfect example. While many yogurts are advertised as a good source of probiotics, the reality is rather murky. Some yogurts may not have many probiotics at all, since the bacteria often don't survive the pasteurization process. And since food is regulated much more lightly than drugs, you also can't really trust the label. Activia does not have to make sure, for instance, that every carton of yogurt is equally chock-full of the microorganisms it claims to contain on its packaging. (Making things worse, the Federal Trade Commission has caught yogurt manufacturers making misleading claims in the past.)”

There is not enough evidence to determine the following about probiotics:

--The minimum dose that is effective for preventing antibiotic-associated diarrhea
--How well they work for different age groups
--Whether they prevent diarrhea caused by Clostridium difficile (which can lead to more serious complications)
--How different probiotics compare in effectiveness and safety
--The best length of time to take them for
--Whether the effect of a probiotic differs depending on the type of antibiotic taken or for how long the antibiotic is taken.

“Probiotics are considered safe overall for healthy people; short-term side effects may include mild gas and bloating. But risks may be greater in immunocompromised people. And a systematic review in the Annals of Internal Medicine in 2018 found that the reporting of adverse effects is often missing or inadequate. Also in 2018, an editorial in JAMA Internal Medicine by Dr. Pieter Cohen, a well-known critic of the supplements industry, called for the FDA to improve its regulatory standards for probiotics to match those of Canada and the EU. Keep in mind that if probiotics do have physiological effects, these may not always be good effects. In some people, probiotics may, at least in theory, overstimulate the immune system or adversely affect metabolic pathways.”

Antibiotic Overuse: Too Much Harm, Too Few Benefits   http://www.mybestbuddymedia.com/2018/03/antibiotic-overuse-too-much-harm-too.html