How The Liberal Left Allows Trump To Control The Media 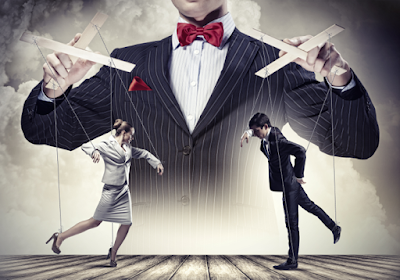 The major influencers who lead the liberal, left-wing media will never, never admit Trump is playing them like a violin. He is sometimes subtle, sometimes all too obvious, but in almost everything he communicates he is pulling the strings of the puppet media and manipulating them into helping him achieve his goals. The following is compelling evidence primarily from the liberal left.


1) Trump makes statements that are intentionally sensational, not to mention controversial, knowing the media eats up anything that drives up the ratings and gets eyeballs and readers.

2)  Trump makes statements that enrages people, no matter they be for or against what he says. He knows these statements will be shared in social media a million times more than any vanilla news story. The major networks cannot but fall for this and gives Trump almost unlimited coverage. Whether the coverage is negative or positive is irrelevant.

3) Trump paints visual images in his speeches: “On day one, we will begin working on an impenetrable, physical, tall, powerful, beautiful, Southern border wall.” Any writer and media person knows that communicating through vivid imagery is far more effective than any other form of communication.

4) Almost everything Trump says is something new and unexpected. The news has time and pages to fill and anything reasonably new is news. There is never a dull moment in Trump land.

5) Trump uses numerous simple, short and concise slogans like Make America Great Again. The often brief sound bites, tweets and headlines are perfectly tailored for Trump’s micro-messaging, and makes the reporting easy for the media. He knows full well that most people have short attention spans.

6) Trump cleverly deflects all criticism toward himself by only briefly referring to it and then immediately pointing out the positives regarding himself and his presidency. Then without missing a step he immediately launches a blistering counter-attack and refocuses attention to the issues concerning his opponent.  The media can’t help but report on the salaciousness of the attack, and Trump has effectively diverted attention of the original accusation away from himself.

“Fear is an incredibly powerful emotion. It captures our attention like no other emotion can. We focus intensely on the thing that is giving us that fear. Secondly, it shuts down higher thinking. When we’re terrified by a bump in the night, we don’t focus on the probability that it’s just the wind. Our critical thinking skills dip as we focus solely on protecting ourselves. Thirdly, it feels crappy, so the fastest way to get out of fear and move toward a powerful emotion is to move into anger.”

4. Painting Everything as Black and White

“So that is the power of laughter. It is a pattern interrupt[ion]. You can’t stay booing and upset and angry when somebody makes you uncontrollably laugh. It also makes you more receptive to whatever comes next that somebody has to say because they’ve already started to lead you emotionally. So what Donald Trump is doing is using laughter to take control of situations where he’s starting to lose control. And what that does for him is it effectively helps him dodge any points that you make against him because he can almost erase them with a laughing crowd.”

7. Doing Whatever Possible to Make it His Game

12. Appealing to Irrational Parts of Our Brains

“This might come as a surprise, but humans actually suck at making rational decisions and are much more likely to make emotion-driven decisions. This is a great thing a lot of the time because in many areas of life, our emotions and feelings are excellent indicators of an appropriate course of action… Unfortunately, it’s damn difficult for humans to use rationality, especially if they haven’t been trained to think critically or haven’t researched the various cognitive biases that result in inaccurate thinking. Donald Trump knows that most people make their decisions on the basis of emotion rather than reason. He also knows that there are certain methods of manipulating people’s emotions to get them to do what you want.”

The left’s shoddy and obsessive journalism has given Trump exactly what he wants. He is literally a puppet master and the left-wing media is the marionette. Of course they are all too proud and enraged to admit it. (Note that Trump will take credit for the enraged part). Left-wing journalist Michael Massing, writing in the stridently liberal, left-wing magazine The Nation, is refreshingly honest and insightful as to what is really going on:

“Yet even as news organizations perform this valuable function, they have shown some serious weaknesses, including bias, insularity, groupthink, and condescension, which have provided ammunition to Trump and his supporters as they seek to discredit the press. More important, the news media have kept their audiences poorly informed about some important realities in the country.”

Massing gives examples of prominent left-wing columnists and journalists and their pretentious rhetoric, which Trump happily cites as examples of unfair media. The writer’s name is followed by a typical recent title of their column:

Massing exposes the real motivation behind all this bombastic rhetoric:

“The prevalence of such repetitive partisan fare has a simple explanation: It’s good for business. Both the Times and the Post have benefited from the much-publicized ’Trump bump’ with a surge in digital subscribers. And with subscribers displacing advertisers as the main source of revenue for these papers, they are increasingly influential in determining what appears in them. As Times media columnist Jim Rutenberg observed in The Fourth Estate, ‘We’re in a mode right now: What do the readers want? We just want to give them what they want.’”

Massing correctly points out that the left-wing media isn’t as interested in having Democrats win the 2020 election, as they are in fanning anti-Trump hysteria:

“Among the reasons that working-class Oklahomans cited for sticking with Trump: not only their opposition to abortion and support for gun rights, but also ‘the mockery of Democrats who deride them as ignorant bumpkins. The vilification of these voters is a gift to Trump.’ Nothing he had written since the election, (New York Times columnist) Kristof continued, had sparked more anger from readers ‘than my periodic assertions that Trump voters are human, too.’ (Needless to say, plenty of ugly mail comes from the right as well.) While urging his readers to stand up to Trump and resist his initiatives, Kristof cautioned them to ‘remember that social progress means winning over voters in fly-over country, and that it’s difficult to recruit voters whom you’re simultaneously castigating as despicable, bigoted imbeciles.’ The nation’s opinion writers, however, seem less interested in persuading others than in feeding the faithful.”

CNN and MSNBC are now no different than Fox News:

“The most irredeemable outpost of the national media is cable news. In the past, Fox News stood out for the nakedness of its partisanship and the purity of its ideology; now, both MSNBC and CNN are mirror versions of it, tailoring their programming to the demands of their Trump-loathing audiences. With their noxious talking heads, irritating breaking-news flashes, nonstop commercials (20 or more minutes out of every 60 on CNN), performative White House correspondents, paucity of reporting, and constant drumbeat of Trump, Trump, Trump, Trump, watching these networks is a demoralizing and soul-sapping experience.”

Massing notes that the left’s obsession with Trump is so complete that many more important issues are not given the attention they deserve:

“Trump’s rise is part of an international right-wing populist wave that needs to be not only decried and condemned but also dissected and understood; resistance must be rooted in wisdom. Watching Morning Joe, I’m struck by how little curiosity its panelists show about the changes taking place outside the studio. There’s little recognition of the tremendous harm inflicted by the 2008 financial crisis, or of the many millions around the world who continue to feel disserved and displaced by the global capitalist system. And given the show’s proximity to the epicenter of that system, it’s no surprise that it rarely acknowledges Wall Street’s role in producing the disruptive forces that helped propel Trump to victory.”

Major newspapers have also had such a fixation on Trump they are not delving in other important issues that affect every day Americans:

“Journalists, while energetically exposing the venality, greed, and shady dealings of figures like Michael Cohen, Paul Manafort, Jared Kushner, and Ivanka Trump, have paid little attention to the activities of financial titans like BlackRock’s Laurence Fink, Elliott Management’s Paul Singer, Citadel’s Kenneth Griffin, Third Point’s Daniel Loeb, and Tudor Investment’s Paul Tudor Jones. While diligently revealing the money-grubbing practices of the Trump Organization, the press has been mostly silent about the operations of Blackstone, the Carlyle Group, Apollo Management, and other private-equity firms whose mergers, acquisitions, and ‘restructurings’ have contributed to so many factory closings, layoffs, and outsourcings.”

Clinical psychologist Roy Eidelson studies, writes about, and consults on the role of psychological issues in political, organizational, and group conflict settings. He illuminates how Trump and other political and corporate leaders effectively press five major buttons in people’s lives in order to influence and manipulate:

“In my research as a psychologist, I’ve found that the psychological appeals used by those eager to maintain or extend their extraordinary wealth and power tend to target five key concerns in our daily lives: issues of vulnerability, injustice, distrust, superiority, and helplessness. Each is a fundamental lens through which individuals and groups make sense of the world, evaluate their circumstances, and decide what actions, if any, to take. Each is also linked to a basic question we ask ourselves every day: Are we safe? Are we treated fairly? Who should we trust? Are we good enough? Can we control what happens to us?”

Leave it to the fine British publication The Spectator and its deputy editor to give a fine conclusion as to what is really going on:

“The American left’s problem is that it can’t calm down. Anti-Trump protestors are now regularly seen screaming, bullying, even hitting people in the streets. Activists have taken to abusing famous Republicans in restaurants; in the age of the camera phone, these incidents are always recorded, and always end up benefiting the person being shouted at. The joke in Washington is that some Republicans, realizing the possible advantages, have been hanging out in liberal restaurants in the hope that a mob will attack them on camera…..

“In other words, Trump has proved that he is, as everyone says, a rabble rouser. But the rabble he rouses most is the one that opposes him. The Democrats now find themselves all but advocating public disorder while fulminating about how dangerous Trump is……

“American politics has always been unpleasant; Trump has just removed the mask of civility. What is extraordinary, however, is the extent to which he has turned the Democrats into the nasty (or nastier) party. Trump’s enemies continue to fall into the silly traps that he lays out before them. Senior Democrats now compete to out-do him in the uncouth stakes, while still pretending to occupy the moral high ground.”

How Late-Night Comedy Fueled the Rise of Trump: Sneering hosts have alienated conservatives and made liberals smug   https://www.theatlantic.com/magazine/archive/2017/05/how-late-night-comedy-alienated-conservatives-made-liberals-smug-and-fueled-the-rise-of-trump/521472/

17 Simple Ways To Spot Fake News: Instructions For The Left and The Right http://www.mybestbuddymedia.com/2018/04/17-simple-ways-to-spot-fake-news.html

9 Basic Ways We Fool Ourselves Into Believing Things That Aren’t True http://www.mybestbuddymedia.com/2018/04/9-basic-ways-we-fool-ourselves-into.html