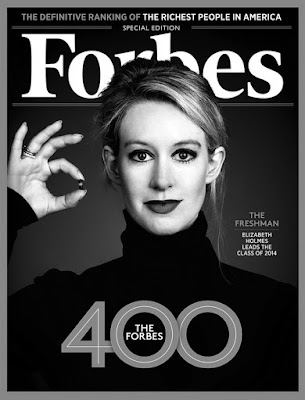 The shameless ploy of the deceitful and crafty Elizabeth Holmes has given everyone a valuable lesson in gullibility and discernment. Holmes’s breakthrough technology was a compact, mobile blood testing machine that was supposed to quickly and effectively test anyone’s blood anywhere. More tests mean a more accurate assessment into the health condition being treated. These innovative machines were envisioned to be used in hospital operating rooms, in military medical helicopters, in submarines and on ships, and in refugee camps.

Below are ten ways Holmes cleverly hoodwinked so many people, including those who regarded themselves as highly intelligent and sophisticated. Notice the similarities between how Elizabeth Holmes duped people and how much of alternative medicine does the same thing. Joe Mercola, Health Ranger Mike Adams, Suzanne Somers, Gwyneth Paltrow, the list is long of the scheming and conniving.

Holmes used her quirky charisma and personality to dupe the unknowingly gullible:

“Why did everyone get taken in? Why didn’t people see through this? I think it was, first and foremost, because Elizabeth Holmes is actually very intelligent and a remarkable pitch woman. One trait that she shared with her idol, Steve Jobs, is this reality distortion field. She looked at you with her big blue eyes, and she has this ability to not blink as often as other people do. It makes her even more mesmerizing. She seemed genuinely passionate about changing the world and changing the face of lab medicine. The combination of these things, the way she looked at you, the deep voice, the intelligence and the passion really made people believe in her and want to back her.”

Holmes effectively leveraged the #MeToo movement. She influenced people to focus on her mission as a woman to break all barriers and become a business and medical phenomena:

“Part of it might be just how so many people, I list myself as one of them, were eager to watch a brash young woman take on this oligopoly in lab technology and bring them to heel. This is a story you want to cheer on. It’s a story of underdogs. It’s a story of feminism. But I had an interesting conversation with a female venture capitalist who thinks the Theranos story is devastating to the effort to bring more gender equality to Silicon Valley.”

Holmes understood most people do not think critically and she can circumvent their intellect:

(Dan Ariely is a James B. Duke Professor of Psychology and Behavioral Economics at Duke University.)

“Ariely also says human brains are good at remembering general statements or ideas, but they are not so good at remembering where the information came from, or sometimes even whether it is true. It’s a psychological concept called source monitoring: ‘When our brain gets a message, we don’t separate very well the statement and where it came from, and we can often get very confused … and not remember,’ says Ariely. ‘It’s why fake news works so well.’ Then, confirmation bias can kick in — people will focus on information and data that supports what they believe or want to be true, says Ariely.”

Holmes understood the ‘power of story’ and used her personal story instead of cold hard facts to influence and dupe many:

“And a good story that conveys that vision can go a long way. ‘The reality is that data just doesn’t sit in our minds as much as stories do,’ Ariely says in the documentary. ‘Stories have emotions that data doesn’t. And emotions get people to do all kinds of things, good and bad. If you think about the people who invested in Holmes with very little amount of data, it’s about emotional appeal and having trust and believing the story and being moved by this, and being able to tell themselves a story.’”

Holmes understood how poised, assertive, confident body language can be used to persuade and deceive:

“And then there is her body posture. In both photos and video of Holmes, she is frequently seen leaning forward, chopping the air with her hand like an ax. She rarely crosses her legs the way most women (and many men) do, but instead places one ankle on the other knee, her leg forming a sharp right angle as she pulls her body forward, filling a larger space. In an excruciating interview with Allan Murray of Fortune after the initial WSJ story broke, she holds this posture the entire time, leaning forward with shoulders hunched and in her deep voice confidently explaining how the media got it wrong. Her words are proactive and commanding, she is in control and the swirling rumors will be dispelled once she is free to reveal all she has achieved.”

Holmes combined her alluring femininity and masculine characteristics to charm and entice:

“The combination of dress, voice, and posture adopted by Holmes suggests she was intentionally trying to project a masculine image, but why would this make powerful men believe her? It is plausible that Holmes was so effective at persuading powerful men because she projected male power back at them, creating a sense of camaraderie based on mutual trust. But it is equally plausible that the aura of masculinity combined with feminine beauty created a beguiling brew that these silverback males couldn’t resist, the perfect combination of a respected equal and a fragile underling needing protection and support. We will never know, and surely there were different factors at play for each of them, but the list of the duped is long and distinguished. Something very unusual happened here.”

Holmes effectively used the technological and business zeal of Silicon Valley to delude people into thinking that her company would be the next Apple or Google:

“If I’m right about that, then I would assign it to the fact that America, from its founding, was always a hyper-capitalistic society. It has also always been a country where people try to innovate. There are obviously great things about all of that, but one of the downsides is it creates an environment where people are less cynical and less skeptical and where swindlers can thrive arguably more.

“Certainly in Silicon Valley for the last 10 years, money has been gushing in. There’s the ‘vaporware,’ the ethos that’s been there for decades that you fake it till you make it. You overpromise to get the funding, and then you use the funding to make the vision a reality and hope the reality catches up to the hype.

“That’s especially the Silicon Valley of today in which so many of these private startups have been able to stay private for much longer than their predecessors did in the ’90s, when they all went public and then eventually that bubble popped and all the stocks came crashing down.”

Holmes most likely lied to herself, honestly believed her lie, and this made her appear authentic and as a result persuasive:

“I think it’s fair to call Elizabeth Holmes a fraudster, a swindler. I think a lot of fraudsters are lying to themselves as often as they lie to others and lie to their marks. Part of what makes them so convincing is that they’ve told so many lies and the lies have gotten so big that the line in their minds between what’s true and what’s a lie becomes blurred. That enables them to continue being able to say these lies with confidence.”

Once Holmes duped not only the rich but also several highly respected, esteemed individuals, it was easy to con everyone else:

“Still, Holmes has convinced a lot of people that she’s onto something. She has assembled what, in terms of public service at least, may be the single most accomplished board in U.S. corporate history. It includes former U.S. Secretary of State, Treasury, and Labor George Shultz; former Secretary of Defense Bill Perry; former Secretary of State and National Security Adviser Henry Kissinger; and former U.S. Senators Sam Nunn and Bill Frist (who is also a heart transplant surgeon), among others.”

Holmes knew that creating something that would benefit humanity and alleviate suffering would make people less critical and allow her to lie and get away with it:

“Indeed, according to a study Ariely details in ‘The Inventor,’ people actually lie more when it’s for something positive, like charity. And they don’t feel emotionally conflicted about the lie. That’s because they can lie and still think of themselves as a good person, Ariely says in the documentary.

“A good cause also makes a lie easier to buy. Holmes was selling ‘the dream … of making the world a better place with transparent and affordable access to your own health care,’ Erin Edeiken, who co-produced the film, tells CNBC Make It. ‘That is such an easy mission to get people behind.’”

Holmes tugged at people’s emotions with her effective and often repeated mantra “A world where you don’t have to say good-bye too soon.” (Starts at 2 minutes 22 seconds)