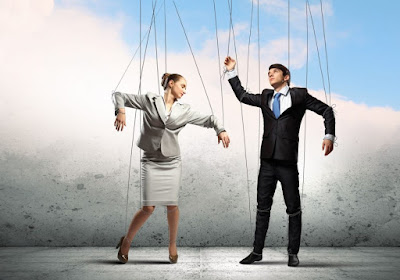 The human race has a long, sad history of sly, smooth-talking con-artists and a rich history of powerful and noble orators. There are clever and charismatic speakers and marketers who are good and moral, others bad and devious. These include politicians, consumer marketers, snake-oil medicine peddlers, religious cult gurus, business opportunity scammers and con artists engaged in consumer fraud. Authentic Christian preachers strictly expound God’s Word and don’t resort to devious emotional manipulation, as the Prosperity Gospel purveyors do. Below are nine of the more common manipulation techniques used by those with unscrupulous motives. Some of the methods below are also used in one-on-one attempts at manipulation.

Manipulators Display a Charisma that Often Outshines the Message


“Cambridge scholar Jochen Menges calls this the ‘awestruck effect.’ Magnetic leaders and powerful public speakers often have it. Their personal energy is so strong that they could be reading the phone book and you would be captivated. If you walk away from a presentation amazed, but you can't remember the speaker's 2-3 key points, you have hit by the awestruck effect. Beware buying anyone's argument if you can't recall and explain what it was. Try doing some research and reading on their ideas on your own, without the distraction of their physical presence.”


Manipulators Use Positivity and Humor to Boost Listeners’ Mood

“There is a large psychological literature on the positive effects of boosting actors’ affect (mood) with respect to their actions. In particular, there is considerable evidence that improving affect leads to more socially desirable behavior. An upbeat emotional appeal, convincingly delivered, improves the listeners’ mood, increasing their propensity to act in a socially desirable manner. The increased propensity can be captured as boosting an emotional responder’s perceived return from his action.”

“Charismatic leadership requires power, and part of charisma is the ability to inspire trust through suggestive power.  Charismatic leaders are able to sell themselves as saviours from precisely the fears that plague their followers at the given time and situation, thus generating trust, becoming like a vicious circle of trust and power. This ‘charismatic relationship contract’ between the leader and the followers can only happen if there is trust, and this means that people are willing to surrender degrees of freedom giving themselves to the cause/common goal.”

“A key trait of charisma is the ability to quickly trigger specific emotions in others. They often have a whole arsenal of stories--funny, sad, or distressing--and listening to them is as good as any Hollywood movie. Hey, there are few things more enjoyable than a good story well told! But check in with yourself. Do you feel your anger rising? Or are your heartstrings being tugged? The teller may be preparing to sell you on something, so they're manipulating you into a vulnerable emotional state. Take a step back and a few breaths. Ask some polite follow up questions before you commit to anything.”

Some Manipulators Attempt to Elicit Pity

"I've had a very traumatic/abusive childhood. My ex treated me very badly. My parents were very narcissistic, too and so on. They will claim that they have suffered terribly in the past for one reason or another. Initially they will claim that they have overcome these difficulties. This ploy is used to manipulate in various ways. First of all, it elicits pity from the listener. Being social creatures our natural instinct is to want to take care of somebody who has been injured. The manipulators know that if they can elicit pity from their listener they are well on their way to controlling them.”

Manipulators Love Bomb – Both in Cults and Business Opportunity Scams

"You are talented. You catch on quickly. You are special. You will do very well in this group. You are a natural at this. You are intelligent. You learn fast. We'd be delighted to have you join us. Together we could do amazing things. You are so friendly and open. We are one big family here, you will fit right in.

“This level of affection is often aimed at new members entering a cult and it is called love bombing. It is feigned affection aimed at making the new member feel incredibly good about themselves and the group in order to very rapidly establish a bond and elicit a commitment from the new recruit.”

“The leader will keep the victims busy. Busy physically and busy mentally. In cults there are exercises to be repeated, tools to be mastered and techniques to be practiced. There are books, DVD, audios and so on with lots of information that need to be digested. And when you finish all of them, you are told that it's worth going over them all again.

“And then there are lists of your wants, desires, values, goals that need to be checked, rechecked, rewritten, updated and so on. On top of that, the members are expected to be telling others, spreading the word, teaching the world... There is never a dull, boring moment in a cult. There is always something to analyze in order to discover a deeper meaning... to learn a significant lesson... to have a profound realization. And it's all just mental gymnastics. It's of no real value for the cult member but what it does is keep them in the mindset of the cult.”

“While YouTube is one of the bigger platforms utilized by cults, they will use any tool available to extend their reach, said Ross. This utilization of social media, paired with the platform's ability to allow people to entrench themselves into a bubble is something further exasperating the issue.

In our analysis we found that emotional phrases were consistently effective on Facebook as measured by the number of interactions. For example:

The top phrases shared on Twitter focus more on explanations and analysis. For example:

How MSNBC and Fox Use Outrage To Dupe The Masses https://www.mybestbuddymedia.com/2019/06/how-msnbc-and-fox-use-outrage-to-dupe.html

17 Simple Ways To Spot Fake News: Instructions For The Left and The Right  http://www.mybestbuddymedia.com/2018/04/17-simple-ways-to-spot-fake-news.html