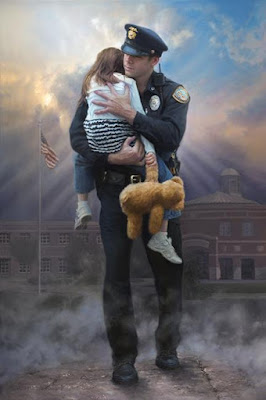 There is a wide range of opinion, as well as a lot of common ground, between police officers all over America. The online magazine Slate compiled numerous views from a diversity of officers during the month of June 2020. The following is a cross section and representative sampling of the insightful comments. The link to the entire Slate article follows the 16 comments.

-----I haven’t heard anyone in my department defend the killing of George Floyd. That’s how extreme the situation was with Floyd, between the fact that it was all recorded, to the total lack of humanity of the officers involved, to the eight to nine minutes of watching someone die, where you really can’t say anything in defense. And traditionally, as cops, we are defensive. But in this situation, everyone’s like, “Yeah, that was jacked up for sure.”

-----The protests have made us as law enforcement very uncomfortable—but it’s a necessary uncomfortable. My view on the protests is: We’ve seen the masses come out and say what they want done. And if it were a small group of people, you could kind of cast it off as “oh, this is just one fringe group.” But when you have police agreeing with it, and you have millions of people in the streets saying it needs to be changed, it’s kind of like, yeah, maybe we need to look in the mirror and change it.

-----The past few weeks have been really difficult for me, because I see both sides of it. I see that police officers are good people. Me personally, I haven’t seen any bad police officers—but I’m not saying there aren’t any in our department. But I also know what it’s like to be Black and for someone to call the police on you for no reason.

-----My department is mostly white, but there are maybe six Black officers and a couple of Latinos. I do feel like some officers don’t understand why people are so angry right now. A lot of the police officers take an us-versus-them stance rather than good-versus-bad or right-versus-wrong, just because it’s a tight knit job where everybody becomes like family. They’re more apt to defend a police officer even when, to me, it’s clear police are in the wrong. But I think it’s more of an issue of a few bad apples. I don’t think the system of policing needs to change, just that officers need to hold people accountable when they see something like this.

-----I didn’t know how the department would react to me agreeing with the protests, and I didn’t know how my family would react with me being a police officer. I’ve had family members who have had bad experiences with police. But I’ve talked to my family, and they’re still happy with me being a police officer. And that has helped the most, that my family’s OK with it. They know that I’m a good police officer; they know that I’m a good person. They know that if anything like what Chauvin did is happening around me, then I’ll step in and make sure it doesn’t get to the point where somebody dies.

Ron (pseudonym) has worked at a police department in a major U.S. city for more than 20 years

-----These days, society is asking police to do more things that they’re not equipped to do. Forty thousand people in the United States commit suicide every year, and what are we doing about it? The answer is, equip a cop to deescalate somebody who’s ready to jump off a bridge? The cops have now become kind of a catchall for everything. Can every cop deescalate a mental health patient? No, even if they get training.

-----In my career, have I done some things that maybe I wasn’t so proud of? I can’t lie to you. But I also have to tell you there are people out there who have no problem trying to kill me. And how do I discern the difference? It’s all about the person’s behavior. A lot of people want to make cops out to be racist. But when they get in those tense situations, cops are reacting to behavior. There have been some people who have come out and said, “Hey, if you just follow the directions of a cop, you should be OK.” That’s not a bad piece of advice.

-----I understand Black lives matter. Everyone agrees with that. That’s not an issue for me, and it shouldn’t be an issue for anybody else. But when you commit arson and start stealing stuff that doesn’t belong to you, that’s when it becomes a problem. We understand it’s not all of you, but you wanna sit there—I’m sure you’ve seen memes that people have sent around about 1,000 good cops, but if you have 10 bad cops, you have 1,100 bad cops because we’re not holding one another accountable. The same could be flipped, with 1,000 protesters and 10 agitators.

-----Some of the stuff I’ve seen cops do at these protests is unnecessary. Like, I understand this lady is sitting in front of you and you need her to move. You don’t have to kick her in the face, though. When it comes to enacting reforms [about the use of force by police], most of them have exceptions. So, for example, most departments already restrict shooting at moving vehicles. But if you are trying to run me over with a car, which could kill me, I’m authorized to use deadly force to protect myself or the life of another. In Virginia, we can use deadly force if we have reason to believe the person fleeing has just committed a felony and poses an imminent threat to us or another person. And if I’m authorized to use deadly force, which means it’s a life-or-death situation where I’m in fear for my life or the life of another, I can and will do whatever I have to do to stop that threat. That means I can shoot, stab, beat, strangle, choke—nothing is off limits at that point.

-----My last 17 years, I’ve seen a big change from when I first started in the attitudes and the culture of policing. It’s been good and bad. Now we’re definitely under the microscope more than we used to be. I wish police departments were a little more transparent in the sense of how we police our own. There’s always this theory that police take care of themselves and things get swept under the rug. In my years in this field, I’ve seen a lot of officers be terminated, a lot of officers be suspended for different violations and breaking the code of ethics. And I think if the public would see that, and we would be more vocal about that, that would kind of help show our community, “Look, we don’t tolerate this.”

-----When we see [police officers beating people] on the news, we sit there and just chat in the office like, “Man, really, again? What were you thinking?” When we hear about these cops who are slamming people on the ground who are handcuffed and their faces bounce off the concrete—I would vouch for all the guys in my office, none of us would treat somebody like that.

-----I grew up in an impoverished neighborhood. My dad was an immigrant. There were six of us living in that home with one bathroom. I’m where I’m at because of hard work. And then I’m now told, “You won’t understand because you’re not Black.” But I’m being told this by Black friends who grew up in wealthy neighborhoods, friends who grew up with parents being very successful. We can go back and look at 100 years ago, and yes, if I was living in that time frame, I would be right there marching. But I’ve seen a Black president.

Katie Miller, 30, former officer at the Metropolitan Police Department in the District of Columbia

-----When I was a cop, we’d have conversations about these shootings, focused on understanding the circumstances around them and what went wrong. There was some room for disagreement about whether an officer handled it in the correct way. Tamir Rice’s killing is a good example of that. There was a tactical mistake, and that was driving that car right up next to a person whom you didn’t know anything about. Why would you do that and basically plop your partner out right in front without any cover? In front of a person who allegedly has a weapon? It’s not smart police work. But there was another layer to that conversation that some of the Black officers brought up, which is: Would there have been the benefit of the doubt given to Rice if he were a white boy as opposed to a young Black boy?

-----De-escalation takes time. That means you need to slow it down. When you get to a scene and someone’s upset, instead of having to worry about the three or four calls pending after the one you just responded to, you need to be able to stay and have the space and lack of pressure to say, “I’m gonna take my time and talk to this person and really figure out what the problem is.” A department that’s adequately staffed can afford to have a softer approach to these issues. So in order for calls for defunding police or reducing police budgets to be in the best interest of communities, I think those calls need to be accompanied by a radical rethinking of what we’re asking police to do.

-----I once got into an argument with an officer over nasal Narcan. He was a “let these scumbags die” kind of person. But part of the training [for Narcan, an emergency treatment for opioid overdose] is: We humanize people. One of the speakers in the training was a mother with three kids, and two of them had died from opioid overdoses. The third one was constantly also having problems overdosing. She pleaded with officers: “Please, this is my last baby. Don’t let my baby die.” And that was what changed that officer’s opinion. He came up to me later and said: “I was wrong. That really hit home. I’m a parent. I can’t imagine losing my child.”

-----We also have to look at police culture, because that wall of silence gets us into an incredible amount of trouble. It allows us to justify behavior that we wouldn’t permit for anybody else. Those officers in Buffalo [who assaulted 75-year-old activist Martin Gugino]—when another officer tried to intervene and was pulled back, what message does that send? That message says, “We live, they die.” How do you say that you’re the good guy and yet you cheer on somebody who committed an unnecessary act of violence that resulted in a serious physical injury? That’s a police culture problem. The organizational structures of police agencies are very narrow pyramids. You can train out of a police culture problem, but it comes from the top.

Source
“In One Day, We Became the Worst Things in the Country”  https://slate.com/news-and-politics/2020/06/george-floyd-police-protests-defund-conversations.html

Related Post
Inside The Mind Of A Police Officer https://www.mybestbuddymedia.com/2019/06/inside-mind-of-police-officer.html