Cannabis Cancer "Cures": Zero Evidence & Preying On The Most Vulnerable 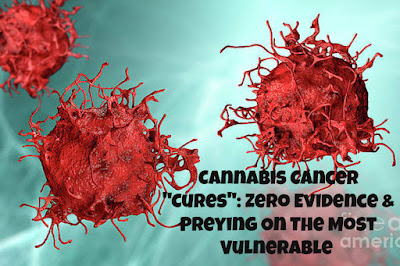 It is sad but true that all the overwhelming research done worldwide has proved that cannabis cannot and does not cure cancer. This is bad news for desperate people in need of a cure, but believing a lie will not cure the sufferer. The reality is that when a patient avoids conventional treatments for this fake cure, they will die. If evidence-based treatments had been chosen, they would have a fighting chance. There are millions of people all over the world who have successfully beaten cancer through evidence-based treatments. Many have not. That is just the nature of the deadly disease. Wishing life was perfect and there was a cure for everything is not reality. It takes courage to face and endure the humiliating and painful, but often effective treatments necessary to destroy toxic, merciless cancer cells.

One motivation rarely mentioned: Many who advocate for this snake-oil grew up in a culture worshipping and using marijuana. This cannabis cure frenzy is a great opportunity for them to boast that their cannabis "god" is truly a savior and will save them from certain death. These predatory lies have led many to needless early graves. Below is an excellent summary from physicist and cancer researcher David Robert Grimes and his 2021 book "Good Thinking".

The deception of "cannabis can kill cancer cells in a petri dish":

"These claims are ostensibly maintained by an entire family of straw men, exemplified by a common assertion made to 'prove' that cannabis cures cancer: High-dose THC can kill cancer cells in a petri dish. This is true - but irrelevant. Killing cells is simple; plated cancer cells are easy to eliminate by many agents, from acid to heat to bleach. The astute reader will note, however, that humans are not petri dishes. Effective anti-cancer agents for us must be able to target cancer cells discriminately while sparing healthy ones. There is no evidence whatsoever that cannabis can do anything of the sort. So enduring are these falsehoods that organizations like Cancer Research UK and the National Cancer Institute have had to dedicate ample resources to tackling these myths."

Preying on people at their most vulnerable:

"The 'cannabis cures cancer' myth staggers on, zombie-like, with a depressingly huge number of websites evangelizing that fiction. Across social media sites, a worrying number of posts circulate endlessly, claiming cannabis oil or THC extracts cure cancer. Often these are pitched at patient support groups, or vulnerable cancer patients and their families........

"Most people don't give cancer serious thought until they or a loved one are diagnosed. While modern cancer treatments and survivability are constantly improving, the prospect of interventions like radiotherapy, chemotherapy, or immunotherapy is understandably frightening. When patients are at their most vulnerable, the allure of 'natural' elixirs with no side effects can be so tempting that it overrides healthy skepticism. More insidiously perhaps, such claims foster mistrust between patients and the medical and scientific community. To preserve their faith, true believers dismiss the lack of evidence for their position as the machinations of 'Big Pharma'......

"The inevitable result of accepting these fictions is to cast researchers and medics as villains, marking them as targets for abuse and scorn. Worse than that, the miracle-cure narrative is delivered so fervently that it persuades many patients to cease their conventional therapies. This has - and will continue to - cost lives......

"One popular meme in 2017-18 featured the wondrous tale of David Hibbitt, alleged to have cured his cancer with cannabis oil. While cannabis enthusiasts widely shared the meme, they were unaware or unconcerned that - far from being cured - Hibbitt had succumbed to his cancer in 2016."

"Anything with biological or medicinal impact is likely to have some potential ill effect, and cannabis is no exception. Though cannabis is relatively safe, current data suggests that regular users have an elevated chance of mental health disorders, including schizophrenia. These effects appear much more pronounced in children and adolescents, with negative implications for educational and social attainment. Contrary to popular misconception, cannabis addiction is entirely possible and problem usage is common, more likely to manifest in heavy users and those who begin at a younger age."

"Explosive claims about its curative power circulate wildly online - a quick Google search for 'cannabis cures' yields anecdotes of miraculous efficacy for every illness imaginable. Cannabis heralded as a panacea for cancer is especially common, alongside claims it can alleviate epilepsy or autism. Gushing testimonials aside, this framing as cannabis as a universal panacea is distinctly at odds with the evidence. A 2017 review by the National Academy of Sciences looked at over 10,000 studies on medical application and efficacy of cannabis and cannabis-derived products, finding reliable evidence for three distinct applications.

"First, there is strong evidence that tetrahydrocannabinol (THC, the chief psychoactive ingredient in cannabis) can reduce nausea and vomiting associated with cancer treatments. These anti-emetic properties have been exploited for decades in the clinical management of cancer symptoms. The review also found good evidence to support the use of medicinal cannabis in chronic pain, and in managing spasms associated with multiple sclerosis. There were, however, caveats to these findings. THC itself is not uniformly well tolerated, leading to many instances where it exacerbates rather than placates vomiting. As safer and more efficient medications and painkilling agents exist, clinical compounds derived from THC tend to be reserved only for when other interventions have failed."

No evidence for the treatment of ADHD, epilepsy, Parkinson's disease:

"But what of the breathless claims of universal curative potency preached by cannabis advocates worldwide? On this, the same review was more damming. Despite the unending hyperbole, the evidence for the efficacy of cannabis in other conditions was minimal and unconvincing. The authors could find no convincing evidence that cannabis was useful for the treatment of ADHD, epilepsy, Parkinson's disease, irritable bowel syndrome, or appetite management for AIDS patients."

David Robert Grimes, Good Thinking: Why Flawed Logic Puts Us All At Risk And How Critical Thinking Can Save The World, The Experiment, 2021

Cannabis, cannabinoids and cancer – the evidence so far  https://news.cancerresearchuk.org/2022/05/13/cannabis-cannabinoids-and-cancer-the-evidence-so-far/

The Facts On Cancer Survivorship: What The Quacks Don’t Want You To Know  http://www.mybestbuddymedia.com/2017/02/good-news-on-cancer-survivorship.html

9 Sly Methods Cancer Quacks Use To Dupe the Desperate

Alcohol & Cancer: What The Booze Industry Doesn’t Want You To Know

Yet Another Victim of Cancer Quackery

13 Concise Reasons Why Mercola Is A Fraud