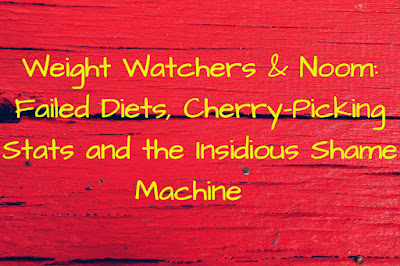 The word is already out that attempting to lose weight with companies like Weight Watchers and Noom are, for the most part, an exercise in frustration. Their allegedly "successful" methods just don't work and are promoted by devious use of statistics. These companies also take advantage of our culture of shame, where mostly women, and even a lot of men, are made to be incessantly and insidiously ashamed of their bodies, resulting in false hopes and emptied wallets. Best-selling author Cathy O'Neal explores this in her 2022 book "The Shame Machine: Who Profits in the New Age of Humiliation". Below is an excerpt.

"Failure, in fact, is central to the dieting business model, fueling earnings for giants like Weight Watchers and Jenny Craig. They profit from a never-ending stream of shame-addled, self-loathing repeat customers. Weight Watchers' former chief financial officer, Richard Samber, told The Guardian that 84% of the customers failed in their diets and cycled back to the company. 'That's where your business comes from,' he added.

"It boils down, as statistics often do, to self-serving choices about what to count. One 2011 study published in The Lancet, a prime example of such cherry-picking, found that a group of dieters at Weight Watchers lost twice as much as a control group that had access only to doctor's recommendations. This sounds impressive. The catch? Funded by Weight Watchers, the study covered a period of only twelve months. This is too little time for the dieters to gain back the pounds. According to earlier Weight Watchers research, published in 2008, nearly four of five customers report losing weight in the first year. Yet this success rate plunges to a measly 16% after five years."

Statistically a winner, in reality not:

"Darkening the picture even more, the threshold for this so-called success is laughably low. It involves retaining only 5% of the weight loss. Say a dieting customer in her earlier period of triumph drops her weight from 250 to 230 pounds. She poses for the 'after' picture, wearing a big smile, and then proceeds to gain back 19 of those 20 pounds. At this point she weighs 249. And yet she has retained 5% of her weight loss. Statistically she is a winner, though I'm betting she doesn't feel like one.

"In other words, diets that lead to dramatic and lasting weight reduction are statistical outliers. To make their case, diet companies play fast and loose with the word 'successful'. And the studies they cite are almost always flawed."

"Another problem has to do with human nature. We tend to share happy news, while keeping a tight lid on the stuff we're ashamed of. Consider updates on Facebook. You see lots of graduations but not much about students flunking out of school.

"The same goes for weight loss. Dieters feel euphoric early in the process, as the pounds melt away. It's an achievement. They're happy to talk. But they tend to clam up when the pounds return. Like me, when I desperately hacked my parents' scale, most people would rather hide their setbacks. Shame muffles their testimony, muddying the statistics. The results are what statisticians call 'selection bias'. It skews industry data toward success stories, almost all of them short-term."

"Noom, a weight-loss program offering behavior modification, provides a prime example of marketing with sketchy statistics. The company targets upscale dieters, appealing to them in part through sponsorship plugs on National Public Radio. Most of its users are likely aware that diet programs usually fail - they even have a blog post entitled 'Why Diets Don't Work' - so the company works this dreary fact into its pitch. 'Deep down,' it says on its app, 'you know this time will be different because you're about to embark on the most modern weight loss course known to man or woman'. Noom provides new subscribers with a time chart showing how many months it will take them to reach their target weight. And it assures them that plenty of others following Noom's formula have found success.

"This is where the usual statistical games commence. Noom cites its own study claiming that 78% of its customers lost weight ....... The analysis included 35,921 participants, all of whom installed the app and recorded their data two or more times a month for six consecutive months. How many others signed up and never came back, or came back for three or four months - enough time to lose faith in the program? Those people weren't counted. In fact, Noom's decision to track only very active users is guaranteed to weed out people who have been overcome with shame. Selection bias, check. What's more, Noom rests its case on results gathered over the course of a single year, far too short a time frame."

"So, once again, while Noom makes money with bad science, let's consider the human toll on the folks who 'failed' on the Noom diet. They are made to feel not only fat but condemned to remain so. And it's their fault. Like other toxic forms of shame, this one hinges on a false choice. This failure, as defined by the shame machine, disheartens them every day. It's a lifelong blight. Many promise themselves that in the future they'll work even harder. Next time they won't drop their guard. They'll persist. And they will blame themselves even more intensely when they regain the weight."

Cathy O'Neal, The Shame Machine: Who Profits in the New Age of Humiliation, Crown, 2022

Duping & Harming Women: Why The Wellness Industry Should Be Crushed  https://www.mybestbuddymedia.com/2020/05/duping-harming-women-why-wellness.html

7 Weight Loss Scams That Will Trim The Fat Off Your Savings http://www.mybestbuddymedia.com/2018/06/7-weight-loss-scams-that-will-trim-fat.html