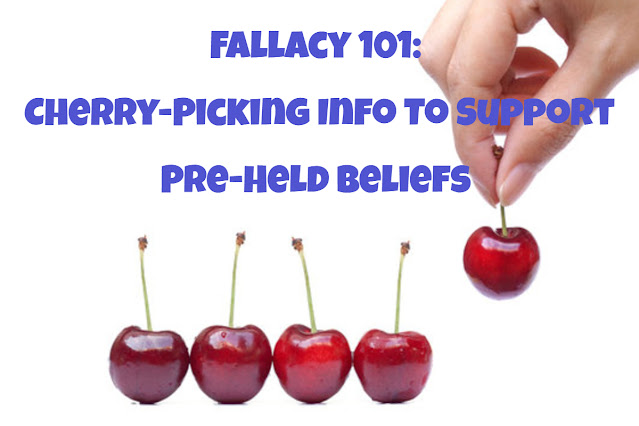 Too many pundits on the Left and the Right, Liberals and Conservatives, are guilty of the fallacy of incomplete evidence, or the cherry-picking fallacy. Many people on social media, no matter their political beliefs, are doing the same. David R. Grimes, in his 2021 book "Good Thinking", delves into the sordid details:

"Cherry-picking is the selective use of evidence to reject or ignore details that contradict or undermine the speaker's assertion. The evidence in question might vary in type and scope, it may be the carefully curated selection of supportive anecdotes and testimonials we have previously seen in the anecdotal fallacy. Worse, it might be a selective fixation on only the data that jibes with one's prejudice while ignoring what the evidence truly conveys."

Not all "info" is created equal:

"This is a severe problem in public discourse and a persistent pitfall in communicating science to the public. On topics as diverse as alternative medicine and climate change, those with vested interests can attempt to circumvent the scientific consensus by clinging to outliers from the noisy data of our world, even when the quality evidence and analysis is against them. What we need to understand is that not all evidence or experiments are created equal, and that it can take sophisticated tools and methods to unravel causal relationships. Cherry-picking is the mechanism that sustains beliefs in the face of overwhelming evidence against it."

Millions have created their own self-contained social-media reality:

"Most of us now get our news online. And in general, we're not getting it from the digital hubs of traditional media outlets but diffracted through the prism of social media. The upshot of this is that we have become our own curators with a tendency to cherry pick items utterly devoid of context.  And when we become our own editors, we tend to reinforce our inherent biases rather than challenge them. In curating our own news, we tend to gravitate to that which conforms to our perceptions and assures us that our view of the world is correct. With the abundance of sources available, we can easily pick a handful of articles extolling a belief we already have, supplementing this with a plethora of blog posts or YouTube videos. Rather than simply receive information in context, we effectively compile a digital scrapbook of that which we would like to be true rather than that which is actually true."

"Stripped of context and barriers, the most extreme voices at either end of the spectrum dominate, staking out mutually opposed camps. Any issue seen through this reductive lens is rendered in binary: either 'good' or 'bad', 'right' or 'wrong'. Of course, as we've seen before, this is often a false dilemma, ignoring the spectrum of views one might hold. But the fact that one person can simply run only with sources that agree with their views while another can do precisely the same thing in reverse stamps a deeply subjective tint on each argument, making it harder than ever to establish any form of commonality. Worse, this can be so pronounced that it can become impossible even to establish agreement on basic facts, resulting in ever-increasing polarization.

"The problem is laid bare by a 2016 report from the Columbia Journalism School on social media's impact: 'Qualified news is mixed with unchecked information and opinions. Rumors and gossip get in the flow. We call this digital fragmentation. Journalistic companies ...... are forced to cut costs, lowering their capacity to offer more corroborated news, context and analysis. One effect of digital fragmentation is polarization. Non-fact-based rumors and opinions accelerate the behavior of quickly taking a short-cut to 'like' or 'dislike' ...... People may be losing the skills to differentiate information from opinion.'"

"A Pew Research survey found that 66% of millennials ....... derive their news primarily from social media. More tellingly, similar research indicates that around 40% of users have purged a social media contact for having conflicting political opinions - suggesting that, not only do we love our walled gardens, but we prune them to be even more homogeneous. This blatant confirmation bias blinds us to the often-pertinent objections and viewpoints of others, and lulls us into an ever more damaging orthodoxy. This problem transcends social media, afflicting even search engines such as Google, which deploy a variety of algorithms to rank pages, with popularity also playing a massive part in ordering search results. But as search engines build up a huge repository of user data based on what their previous searches have suggested, it risks catering to our whims so much that it can exacerbate the problem further."

No shame in admitting you are wrong:

"Our ideas do not define us. They are often wrong, and there should be no shame in adapting to new information. To do so is laudable; the only shame is refusing to change our minds when evidence demands it. Nor should we feel any pressure to jump to an instant opinion when the evidence simply isn't there. Positions formed in haste are often wrong and resistant to change. There is no shame or cowardice in not leaping to a conclusion. Uncertainty might be uncomfortable, but we must endure it."

Falsehood flies, and truth comes limping after it, so that when men come to be undeceived, it is too late; the jest is over, and the tale hath had its effect.

David Robert Grimes, Good Thinking: Why Flawed Logic Puts Us All At Risk And How Critical Thinking Can Save The World, The Experiment, 2021

Do you see anyone holding a gun to your head? No, there is no one holding a gun to your head. There is no immediate obligation to come to a conclusion and form an opinion when only one side is known and there is complete or partial ignorance of the other side in the discussion. Most people can't honestly answer the simple question: "What are the top 3 counterarguments of the other point of view?" In most cases they can't, yet they feel compelled to arrive at a conclusion and form an opinion. Again, who is holding a gun to their head? The human brain is more than capable of holding the points of only one side without jumping to a conclusion. If there is honest interest in the main points of the other side, and most of the time there is not, then time is spent learning. Only then can an opinion be valid and informed, no matter what it is. This has nothing to do with being right or wrong, but whether the opinion was achieved with honesty and integrity. However, people who rigorously and humbly choose honesty and integrity are far more likely to be right than wrong.