Exposing the Hate and Hypocrisy in the War on the West 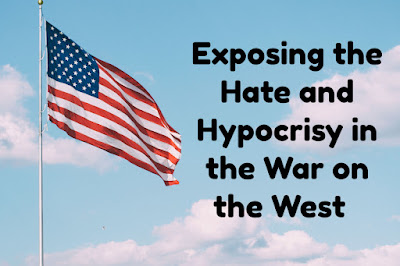 Every majority population in EVERY country in the world has within it racists against the minorities.  Historically and today racism exists in every country in Asia, Africa, the Middle East and South America. There are no exceptions. To single out Western nations as the only ones - there is a word for that - racism! Because Western influence has been so great, its sins are obvious and many, but its influence has been for the most part an overwhelming blessing for the world. Imagine a world where the communist Soviet Union or present-day China was the predominant culture and influence. It would be horror. No peoples in any country are perfect. There is human depravity everywhere. To single out one race is pure hatred and hypocrisy. Below are just a few pertinent points quoted from Douglas Murray's "The War On The West".

Compliments of the West - The overwhelming majority of medical and scientific breakthroughs that the world currently benefits from:

"The list of things that white people have done may include many bad things, as with all people. But the good things are not small in number. They include almost every medical advancement that the world now enjoys. They include almost every scientific advancement that the world now benefits from. No meaningful breakthrough in either of these areas has come for many centuries from anywhere in Africa or from any Native American tribe."

"White people founded most of the world's oldest and longest established educational institutions. They led the world in the invention and promotion of the written word. Almost alone among any peoples it was white people who - for good or for ill - took an interest in other cultures beyond their own, and not only learned from these cultures but revived some of them. Indeed, they have taken such an interest in other peoples that they have searched for lost and dead civilizations as well as living ones to understand what these lost peoples did, in an attempt to learn what they knew. This is not the case with most other peoples ...... In historical terms, it seems to be as unusual as the self-reflection, the self-criticism, and indeed the search for self-improvement that marks out Western culture."

Lifting one billion people out of extreme poverty:

"White Western peoples happen to have also developed all the world's most successful means of commerce, including the free flow of capital. This system of free market capitalism has lifted more than one billion people out of extreme poverty just in the twenty-first century thus far. It did not originate in Africa or China, although people in those places benefited from it. It originated in the West. So did numerous other things that make the lives of people around the world immeasurably better. "

"It is Western people who developed the principle of representative government, of the people, by the people, for the people. It is the Western world that developed the principles and practices of political liberty, of freedom of thought and conscience, of freedom of speech and expression. It evolved the principles of what we now call 'civil rights', rights that do not exist in much of the world, whether their peoples yearn for them or not. They were developed and are sustained in the West, which though it may often fail in its aspirations, nevertheless tends to them."

"For there is, even today, no serious movement of peoples in the world struggling to get into modern China. For all its financial prowess, the world does not wish to move to that country. It does want to move to America and will go to extraordinary lengths - even the risk of life - to reach that goal ..... The migrant ships across the Mediterranean go only in one direction - north. The people-smuggling gang's boats do not - halfway across the Mediterranean - meet white Europeans heading south, desperate to escape France, Spain or Italy in order to enjoy the freedoms and opportunities of Africa ........ Despite everything that is said against it, America is still the world's number one destination for migrants worldwide. And the next most desirable countries for people wanting to move are Canada, Germany, France, Australia and the United Kingdom. The West must have done something right for this to be the case."

No overseas cabinet position for you:

"It is not possible today for a non-Indian to rise to the top of Indian politics. If a white person moved to Bangladesh, they would not be able to become a cabinet minister. If a white Westerner moved to China, neither they nor the next generation of their family nor the one after that would be able to break through the layers of government and become supreme leader in due course. It is America that has twice elected a Black president - the son of a father from Kenya. It is America whose current vice president is the daughter of immigrants from India and Jamaica. It is the cabinet of the United Kingdom that includes the children of immigrants from Kenya, Tanzania, Pakistan, Uganda and Ghana and an immigrant who was born in India. The cabinets of countries across Africa and Asia do not reciprocate this diversity, but it is no matter. The West is happy to accept the benefits this brings, even if others are not."

"Today the West faces challenges without and threats within. But no greater threat exists than that which comes from people inside the West intent on pulling apart the fabric of our societies, piece by piece. By assaulting the majority populations in these countries. By saying that our histories are entirely reprehensible and have nothing good to be said about them. By claiming that everything in our past that has led up to our present is irredeemably riddled with sin and that while these same sins have beset every society in history, the debtor should knock only on one door. And most importantly by those who pretend that a civilization that has given more to the world in knowledge, understanding and culture than any other in history somehow has nothing whatsoever to be said for it. What is anyone to do or say in the face of such myopic, omnipresent hatred?"

Douglas Murray, The War On The West, Broadside Books, 2022

Obviously when a Black man commits a crime no one should say - These Black men are all criminals! And yet it is okay to generalize about Caucasians and people from European countries. The hypocrisy is breathtaking! This is racism, pure and simple. So much for Martin Luther King's correct statement about being judged by the content of one's character.  The worst of this hypocrisy is that the overwhelming majority of Blacks and Caucasians who advocate this hate are the very ones who fully support the annual savage and violent butchering of over 600,000 in-the-womb babies in the US. Almost 40% of these babies are Black! So, it is okay to support an annual genocide against your own community and then complain about racism??!! What do you think is waiting for each and every one on Judgement Day? Look in the mirror. Every person is a sinner. No one is better than anyone else. There is no excuse for hate, for evil, for genocide.

If the United States did not exist, the Nazis, Fascists, Communists and Radical Islamists would be in total control of every inch of this planet. This entire world would be a living Hell. And the very people currently hating the West and its values would, in that Hellish scenario, be fighting for just one ounce of basic freedom. What can be said for people who are so full of hate that they viciously turn on those who have given them so much?

The basic, root problem of all this is the Spirit of Antichrist. It is all an attack on the Wests' fundamental Christian values and beliefs. Satan and his demons have quite a foothold and are puppet masters controlling their human recruits. It is not long before Christ's return. What will become of those who have such loathing for Christ and obey their hateful, racist impulses?

How To Form Opinions That Are Accurate & Intelligent (Part One)