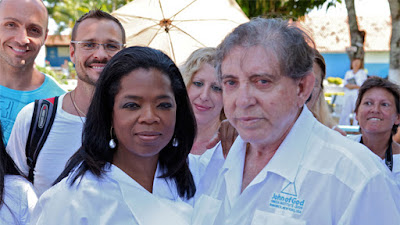 John of God is an internationally popular Brazil-based spiritual and physical “healer” who claims to channel more than 30 deceased doctors and is “used” by his version of God. He is one of the world’s most devious snake-oil salesman and most dangerous spiritual shaman. He rakes in an estimated $10 million US per year. The following is a summary of evidence exposing his shameless dishonesty and deceit.


“Once the diagnosis has been made, the healing procedure begins. It may be ‘visible’ or ‘invisible’ spiritual surgery. If the patient chooses invisible, they are directed to a room to meditate while the spirits do their work. ‘Visible surgery’ can involve sticking a surgical clamp up the patient’s nose. It looks very impressive, but is nothing but an old carny trick, usually performed with a long nail and a hammer. Any anatomical text will reveal that there is a roughly four-inch-long passage up through the nasal cavity that is quite ready to accommodate a foreign object without any harm.”

Never underestimate the ego – it’s hard to admit being wrong:

“In any case, it is a fact that people spend thousands of dollars to travel to Brazil to be poked, prodded and scraped. Why? Because they are desperate and desperate people do desperate things. And many will provide alluring accounts of benefits. As Benjamin Franklin said, ‘There are no greater liars than quacks — except for their patients.’ Nobody wants to admit that they were swindled by some peasant who put tweezers up their nose. It is more comforting to believe that they were helped.”

-----One man claimed his brain tumor was smaller, not gone, but provided no evidence.
-----A woman with chronic fatigue claims to “feel better” after John of God performed “spiritual surgery” as well as cutting her right above one of her breasts, drawing blood.
-----A man suffering from ALS (Amyotrophic Lateral Sclerosis), also known as Lou Gehrig's disease, showed no improvement.
----- A South African actress with breast cancer showed no improvement.
----- A woman paralyzed from the waist down “is able to walk using rails to hold on to, but she clearly has no use of her legs; she says she feels something is improving, though.”

“As described here elsewhere, an adrenaline rush is often experienced by people who are under unaccustomed stress or sudden shock. We're all familiar with accounts of soldiers in battle who are wounded in ways that would otherwise cause them great pain and bring an immediate reaction, but they remain unaware of the injury until the stressful conditions are relaxed. I've see this happen when people onstage in front of a faith-healer's audience manage to do things that would have otherwise brought great discomfort and pain. In the case of John of God's sudden incisions, and considering the relatively insensitive areas he chooses to make these cuts, along with the fact that the victims are told to keep their eyes closed, I'm not surprised at the fact that — so far as the Casa de Dom Inacio people will permit us to see! — the victims show little or no reaction to the cutting procedure. But remember that we are only allowed to see the incision, not the possible subsequent reaction after the cameras are taken away.”

You don’t actually need to be there to receive a healing:

“John maintains that the success of his treatment hinges on the patient abstaining from drinking alcohol, eating pork and having sex for 40 days after treatment. That can provide for a convenient ‘out’ in case no miracle occurs. Patients can be healed even if they are unable to travel to Brazil. All that is needed is a surrogate willing to undergo the spiritual surgery. No evidence for this remote healing is provided.”

John of God cleverly sets it up so he can’t lose:

“What allows John of God to persist in producing new believers includes a combination of things. First, because he is tapping into strong religious belief, there is a lower than the already low bar to convince people of his powers. Second, no one has performed (or is likely to perform) a detailed study of people who have come to him for healing, complete with careful documentation of their pre-John of God condition and then a rigorous follow up of what happened to them after they sought healing from John of God. Finally, faith healers like John of God produce a ‘heads I win tails you lose’ situation. If a patient isn’t healed, it’s not because John’s mystical powers failed. Oh, no! It’s because the patient didn’t believe enough or didn’t follow John’s instructions closely enough. John of God also tells people who come to him that they need to wait at least 40 days for healing, which, conveniently enough, is usually long after they have left Brazil.”

Not for the squeamish - John of God’s eyeball scraping:

“John of God will seat a subject for his ‘visible surgery’ stunt and apparently scrape the eyeball of the patient with the edge of a knife. I believe that this is a variation of the usual trick ….. in which a knife-blade is inserted under the eyelid of a subject with little or no resulting discomfort. With the Brazilian faker, the ‘scraping’ motion gives it a much more fearsome aspect, but for several good reasons I doubt that any contact takes place with the cornea.

“The sclera — the white section of the eye — is relatively insensitive to touch. Try touching that area with a finger or any clean object, and you'll see this is true. The cornea, however, is very sensitive — among the most sensitive areas of the body. Incidentally, it's also the fastest-healing organ …...

“Most persons — and I'm one of them — have a difficult time watching the eye being touched. We tend to empathize with the situation, and I'm sure that some readers are at this moment involuntarily squinting in distaste as they read these words; we're that reactive to eyeball-touching. Few persons will resist looking away when John of God seems to scrape an eyeball, and I note that he's furtively watching the position of the camera as he performs this stunt, blocking the view with his body when a close-up is sought.

“There's also the distinct possibility here that John of God introduces a temporary local anaesthetic — benzocaine would work — onto the eye surface, which would allow contact with the cornea. We don't know, though we could have found out....In any case, unless an anaesthetic has been introduced, it is impossible for this man to be touching the cornea of a human eye as he appears to do, without causing immediate involuntary flinching from the patient.”

When the “rubber meets the road” or when things get serious, and personal, John of God shows his true beliefs:

“In an ironic twist, in 2015 John of God complained of a pain in the stomach to his cardiologist. Yes, the medium who claims wondrous healing powers has a cardiologist who without fanfare years earlier had implanted three stents in John’s narrowed arteries. Now he sent his patient for an endoscopy that revealed a tumour. A 10-hour surgery, not the spiritual variety, was followed by extensive chemotherapy. A year later, John appears to be well, cured not by mumbo jumbo, but by modern surgery and drugs. No problem affording the treatment. John is wealthy from donations and sales of blessed water and magic triangles. When asked why he did not heal himself the way he is able to heal others, he replied with the stunning rhetorical question, ‘what barber cuts his own hair?’”

The terrifying truth of John of God’s spirituality:

“A real question concerning John of God is whether or not he is legitimately practicing necromancy or if he is just a con-artist who has found a way to make money. Regardless, he is on dangerous ground. If he is indeed involved in trying to summon the dead then he is inviting God’s wrath upon himself, and he is also opening himself and all who involve themselves with him, up to demonic activity. The actual ability to contact the dead is an interesting subject. We know that Saul used a medium (in direct opposition to God’s stated will) to contact the prophet Samuel after he had died (1 Samuel 28), so it would seem that there is a possibility of doing this but, again, it is a direct violation of God’s command. Furthermore, when a person surrenders their body to a spirit (as is the practice of mediums) they cannot know for certain what kind of spirit they are dealing with. Demons are the only spirit beings that the Bible makes us aware of who actually possess the body of human beings (Mark 5:9; Acts 19:11-20)……..