Invisible Wounds of the Aching Blue 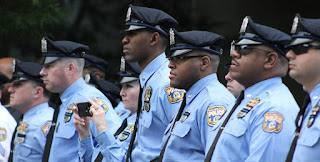 The number of incidences of police misconduct has been overwhelmingly covered by all the media in recent years. In many cases the criticism is more than warranted. However, there has been very little, if any, reporting of the debilitating stress that police officers work under. The consequences of this stress, and trauma, is psychologically crippling, life altering, and sometimes deadly. Below is a concise summary, basic information for those who choose to have an informed opinion, and a call for empathy.

One policeman’s lament, which is notably different from the stress encountered on the average job:

“What you see is someone lying on the ground, with things coming out of their mouth. Imagine trying to help them while their family is screaming and begging you to do it ‘quicker, quicker.’ Sometimes you cannot bring them back, and you witness families mourning someone they love. On the same day you come across a traffic stop where teenagers are actively shooting heroin into their arms, and you have to deal with an overdose situation again. The most traumatic are the ones you cannot save people.”

A trauma expert who works with traumatized civilians, victims of torture and human trafficking, refugees and first responders:

“The nation is finally expressing intolerance for unjustifiable brutality, racism, and suffering caused by some in law enforcement. At the same time, I hope to also shed light on the tough experiences that cops and other first responders experience. I believe empathy is the key to mutual understanding…..

“They are regularly exposed to serious injury, death, immediate threat to themselves, their colleagues and civilians, and very stressful decision-making situations. While people may have heard more about trauma in veterans, they may be less aware of first responder trauma. Others might think post-traumatic stress disorder happens only to those who were directly traumatized.

“However, PTSD also happens in those who witness trauma: exposure to violent crimes or serious accidents, or their aftermath. These events deeply affect the day-to-day lives of first responders, including the police. In one study published in 2013, about 80% of officers reported seeing dead bodies or severely assaulted victims in the past year….

“The truth, however, is that all humans are vulnerable. We are not made to have such horrific experiences on a regular basis. Based on our unique biology and the severity and repetition of trauma, many of us will feel an impact; this is just how the human body and brain react to trauma and stress.”

The severe and debilitating effects of Post-Traumatic Stress Disorder:

“PTSD is only one consequence of trauma exposure, which switches the brain to fight-or-flight mode, and quick survival-related decision-making. The brain is always on alert, trying to prevent recurrence of trauma. Those with PTSD experience nightmares, flashbacks, intrusive memories, anger, insomnia, avoidance of any reminder of trauma, and social withdrawal, among other symptoms. Approximately 15% of the police officers in the U.S. and globally experience symptoms of PTSD. Numbers can be much higher based on exposure, such as after natural disasters or tragedies like 9/11.

“Police officers show not only high levels of PTSD, but also depression, anxiety and suicide. More police officers and firefighters die by suicide than in line of duty, and unfortunately the number of suicide deaths among the police seems to be rising. While many others might not meet all the criteria for PTSD, they still suffer from some symptoms such as insomnia, nightmares and isolation.”

The aching blue: Trauma, stress and invisible wounds of those in law enforcement      https://theconversation.com/the-aching-blue-trauma-stress-and-invisible-wounds-of-those-in-law-enforcement-146539

Study after study supports what some refuse to believe:

“Most often, the events reported in this study involved witnessing sad and depressing events, such as adults and children who were severely injured or died from abuse, assault or traffic accidents. Kaufmann et al. (2013) found seeing someone severely injured or dead was the most common event experienced by protective service workers. Yet, only 30% of those workers reported this event occurring, whereas, over 80% of the officers in the current study experienced these events.”

--The suicide rate for police officers is four times higher than the rate for firefighters.

--In the smallest departments, the suicide rate for officers increases to almost four times the national average.

--More police die by suicide than in the line of duty. In 2017 there were an estimated 140 law enforcement suicides.”

“The circumstances of those communities produce many people who live on the margins — homeless people, drug users, petty criminals and the more dangerous members of organized gangs whose victims are almost always the peaceful people in their community who are just trying to get by. That is why there are more police in disadvantaged communities; there are a lot of good people to protect and more problems to contain.

“And containment is the thankless job we have given the cops. Decade after decade, we fail to do enough to transform our poor and largely non-white urban neighborhoods. Instead, we leave it to the police to keep the lid on. Much of the time, they do their best, but cops are not superheroes, they are human beings. They have the flaws we all have. A few are so flawed they should not be entrusted with a gun. Like all of us, they are susceptible to fear, to anger, to frustration. They have been trained to react with overwhelming force because they often face criminals with superior firepower. Their split-second decisions are driven by this training and sometimes they get it horribly wrong.”

Empathy is the path to healing between cops and black citizens  https://www.latimes.com/opinion/topoftheticket/la-na-tt-cops-blacks-20160712-snap-story.html

Inside The Mind Of A Police Officer https://www.mybestbuddymedia.com/2019/06/inside-mind-of-police-officer.html