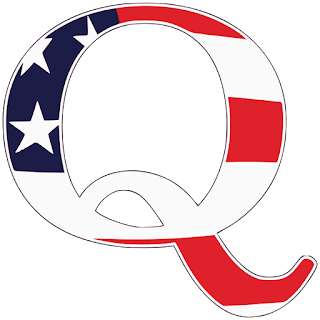 The extreme, far-right conspiracy movement QAnon has made so many failed predictions and false claims that no honest, reasonable person can take them seriously. Only people filled with rage, bitterness and fear will believe their lies. A commitment to facts and truth, regardless of the cost, is missing for most. Critical thinking is not taught in schools, nor much anywhere else, so people are easily duped into believing even the most outrageous claims. A fair number of dedicated Christians have embarrassed the faith and desecrated Christ’s name on the earth by falling for and propagating outright demonic lies. The mysterious leaders of QAnon are worse than the sly, smooth-talking snake –oil salesmen who fabricate fake health “cures” and separate people from their money. The following are just a few of the primary deceptions spewed by QAnon.

-----QAnon's first prediction was that Hillary Clinton was about to be arrested and would attempt to flee the country. This prediction failed.

-----The "Storm" would take place on January 20, 2021, the day of Biden's inauguration. No coup took place and Biden was peacefully inaugurated.

-----A major event involving the Department of Defense would take place on February 1, 2018. Nothing happened.

-----People targeted by the president would commit suicide en masse on February 10, 2018. No prominent people committed suicide that day.

-----The Trump military parade would "never be forgotten". The parade was canceled.

-----Something major would happen in Chongqing on April 10, 2018. Nothing notable happened in Chongqing that day.

-----There would be a "bombshell" revelation about North Korea in May 2018. There were no notable developments.

-----A "smoking gun" video of Hillary Clinton would emerge in March 2018. No video appeared.

-----Multiple failed predictions that John McCain would resign from the US Senate. McCain remained in the Senate until his death in August 2018.

-----Multiple failed predictions that Mark Zuckerberg would leave Facebook and flee the United States. Zuckerberg remains CEO of Facebook as of March 2021.

-----Multiple failed predictions that Twitter CEO Jack Dorsey would be forced to resign. Dorsey remains CEO of Twitter as of May 2021.

-----Multiple failed predictions that Pope Francis would be arrested on felony charges.

-----Multiple failed predictions that "something big" would happen or the truth would emerge "next week".

As well as the failed predictions, Q has posted numerous false, baseless, and unsubstantiated claims, such as:

-----That the CIA installed North Korean leader Kim Jong-un as a puppet ruler.

-----A July 7, 2018, Daily Beast article noted that Q falsely claimed that "each mass shooting is a false-flag attack organized by the cabal."

-----That Obama, Hillary Clinton, George Soros, and others are planning a coup against Trump and are involved in an international child sex-trafficking ring.

-----That the Mueller investigation is actually a counter-coup led by Trump, who pretended to conspire with Russia in order to hire Mueller to secretly investigate the Democrats.

-----That the Rothschild family leads a satanic cult. Similar political allegations and rumors have circulated since the 1970s. Typically the allegations revolved around investigators using existing Satanic cults to lure and blackmail left-wing activists, or in the case of the Franklin child prostitution ring allegations, Satanic sexual abuse perpetrated by elite Republicans. A significant difference between the older narratives and the QAnon of today is that now elite Democrats are considered the villains instead of Republicans.

“People in the QAnon community often talk about alienation from family and friends. ... Though they typically talk about how Q frayed their relationships on private Facebook groups. But they think these issues are temporary and primarily the fault of others. They often comfort themselves by imagining that there will be a moment of vindication sometime in the near future which will prove their beliefs right. They imagine that after this happens, not only will their relationships be restored, but people will turn to them as leaders who understand what's going on better than the rest of us.”

The Splintering of the Evangelical Soul

“The media crisis reaches across the whole of society, but the evangelical movement also faces an authority crisis of its own making. A generation of evangelical leaders who commanded immense respect, at least across the broad middle of American evangelicalism, have passed away. The current generation of evangelical institutional leaders, though markedly more diverse than their forebears, struggle to rise above the rampant ideological othering of our time. Moreover, the movement has seen countless leaders fall from grace in spectacularly destructive ways. At the same time, we have seen the rise of the celebrity pastor. It was once the case that a long obedience in the same direction, a life of humble study and service, earned a person a modicum of spiritual authority and a modest living. Today, a dashing profile and a talent for self-promotion can earn wealth and stardom in the Christian celebrity marketplace.”

Online Conspiracy Groups Are a Lot Like Cults  https://www.wired.com/story/online-conspiracy-groups-qanon-cults/

Life amid the ruins of QAnon: ‘I wanted my family back’ An epidemic of conspiracy theories, fanned by social media and self-serving politicians, is tearing families apart  https://www.washingtonpost.com/nation/interactive/2021/conspiracy-theories-qanon-family-members/

‘How can I talk to my parent who has been consumed by Trumpism and QAnon?’ “Just because someone in a cultic movement can quote the Bible doesn’t mean they believe the Bible is saying the same thing you do.” https://baptistnews.com/article/how-can-i-talk-to-my-parent-who-has-been-consumed-by-trumpism-and-qanon/#.YLLI9LdKjIV

Why are Christians so susceptible to conspiracy?    “The human mind has the capacity to create intoxicating and soaring stories that emerge from our experience, but we have to remember to ground ourselves in reality.”   https://baptistnews.com/article/why-are-christians-so-susceptible-to-conspiracy/#.YLLJh7dKjIW

Is QAnon a prophet or provocateur? And how should Christians respond?   “Like all good lies, Q’s narrative contains a healthy dose of truth.”   https://baptistnews.com/article/is-qanon-a-prophet-or-provocateur-and-how-should-christians-respond/#.YDMJVdhKjIV