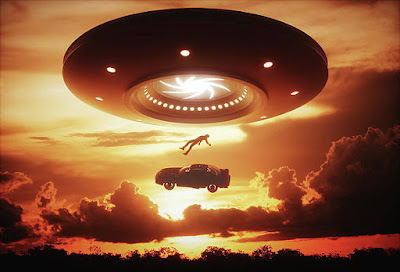 -----experiencing a period of time of an hour or more, in which you were apparently lost, but you could not remember why, or where you had been

-----seeing unusual lights or balls of light in a room without knowing what was causing them, or where they came from

-----finding puzzling scars on your body and neither you nor anyone else remembering how you received them or where you got them.

Below is a concise but comprehensive quoted summary of the eight primary reasons and causes that explain why these abductions are illusions.

"Research has shown that at least some supposed abductions by aliens were due to overactive and uncontrollable imaginations of individuals with Fantasy Prone Personality disorder (FPP) ...... There is an entire class of persons who 'are prone to experiencing exceptionally vivid and involved fantasies. Such people often have difficulty distinguishing between fantasy and reality…. Based on preliminary research ...... approximately four percent of the population falls into the FPP category, ranging in degree from mild to intense.'

"Another study found that over half of FPP people spent a large part of their childhoods 'playing' with imaginary friends and animals, as well as with actual dolls and stuffed toys that they thought were alive. Some reported interacting with leprechauns, elves, angels, fairies, and the like. The vast majority spent at least half their waking hours fantasizing. These fantasies can be so intense that many could actually feel, hear, and smell the imaginary phenomena ..... The FPP person has trouble distinguishing their fantasies from external reality, and in some cases cannot do so at all."

"True believers counter that UFO abductees sometimes present with skin burns, rashes, nausea, headaches, dry mouths, etc. Sometimes (mostly with women) the injuries are blamed on sexual/medical invasive procedures performed by the alien captors. This was interpreted as overwhelming objective evidence that the stories were true and not fantasies. It was thought that people could lie but not cause themselves to suffer such injuries or illnesses.

"The most frequently reported symptoms in our sample involved rash-like facial and body marks, itchiness, headaches, dizziness, and burning, or watery eyes. These symptoms typically occur in cases that report medical examinations by aliens where the subject is often stuck with a needlelike device and blood is extracted, or the subject is exposed to bright lights or X-rays.

"Many of the so-called abductees studied by Hough and Kalman in their 1997 book The Truth About Abductions were highly imaginative in a negative, paranoid way ..... Earlier research pointed out the many similarities between alien abduction memories and those of Satanic abduction. For the client or patient, the influence of a hypnotist combined with our cultural fascination with scifi and UFOs facilitates reaching an easy conclusion of a kidnapping by extraterrestrials. So-called retrieved memory details may be fantasies provided by the subject, or memories of other events reinterpreted as alien abductions."

"The hypothesis that alleged memories of alien abduction are screen memories for actual human sexual assault was independently proposed by S.M. Powers. She posited that the claim of having been experimented on by aliens may serve to mask a traumatic memory of human sexual abuse. The pseudo-memory of an alien abduction is more bearable, as it does not involve a breach of trust by a relative, neighbor, or other familiar person. The victims of the assaults thus employed two coping mechanisms—amnesia and the creation of a screenings memory of a fictional abduction by extraterrestrials (ETs). Bias of the hypnotist colors the nature of this pseudo-memory, whether traumatic or uplifting."

The Psychological Profile of Experiencers

"Research into sleep disorders has experienced recent advances. Many abduction experiences may be due to hypnogogic or hypnopompic states (the person has such a vivid dream just before waking up or falling into normal sleep that they believe it was real, or it can be conceptualized as the person is partly awake but hallucinating) or sleep paralysis (which often accompanies the state or hallucination)."

"Over the years it has become common in UFOlogy to hear about abductees whose parents and children were also abducted. The fact that some families claim to have experienced generational abduction extending over decades should be an obvious clue to any behavioral scientist or mental health professional that a shared belief system and/or problematic family dynamics and/or a genetic factor related to mental disorder or inheritance of FPP is involved. In simple terms, this is a shared delusion, but the abductee writers and advocates in UFOlogy, ignoring the relevant scientific and medical findings, instead offer it as evidence confirming the abductions."

"Some people like to play the victim role as it provides rewards ...... In some cases the experiencers enjoy their new status and go on speaking tours at UFO conventions, and otherwise promote the books written about them (e.g., Travis Walton, Betty Hill, Betty Andreasson). Since this has become a sizeable business, a small industry like Roswell tourism, the people who earn money counseling abductees and writing books about them have a vested interest in perpetuating the abduction mythology. Also, the phenomenon has strong religious aspects, and no one likes having their faith attacked. Those who believe they have been possessed by the devil or spirits want to be seen by healers who share their belief system– and so seek exorcists, rather than psychiatrists."

10 Simple Reasons Why UFOs Are Not E.T.s  http://www.mybestbuddymedia.com/2015/01/10-simple-reasons-why-ufos-are-not-ets.html

10 Simple Reasons We Should Not Send Messages To Alien Civilizations https://www.mybestbuddymedia.com/2020/07/10-simple-reasons-we-should-not-send.html