10 Dangers and Lies Of Herbal "Medicine" 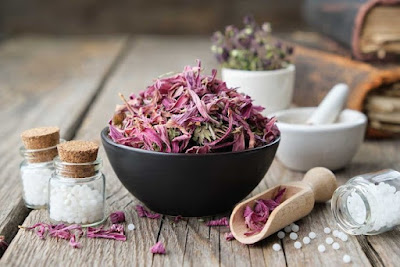 Herbal supplements used as "medicine" fall into the category of snake-oil, unsubstantiated, pseudo-science that relies on the placebo effect to hope for some kind of remedy. The issues are that not are people just throwing away their money, but many of these supplements contain potentially harmful toxins. Also, when
a herbal supplement is used instead of conventional, evidence-based, fully-tested medicine, the results are often catastrophic. These smooth-talking, quack-medicine peddlers take advantage of people's desperation and medical lack of knowledge. Below are just a few of the primary lies and dangers of this so-called medicine.

Echinacea is worthless in treating colds:

"Echinacea is promoted as a remedy to both prevent and treat colds and influenza. Echinacea has studied in clinical trials, using different variants of the plant, as well as different parts of the plant, and in some cases without any standardized ingredients or dosing schedules, resulting in conflicting findings that are sometimes supportive of an effect, and others that suggest no effectiveness. Overall, the strongest evidence points to the conclusion that Echinacea is likely no more effective than a comparable placebo for preventing or treating colds."

Herbs do not help with insomnia:

"There’s no conclusive evidence that ginkgo is helpful for any health condition. Although some studies suggest that ginkgo may help to slightly improve some symptoms of dementia, the findings have been described as unreliable. Also, other studies have had conflicting findings. Ginkgo neither helps prevent dementia or cognitive decline nor prevents Alzheimer’s-related dementia from getting worse—this is according to studies that include the long-term Ginkgo Evaluation of Memory Study, which enrolled more than 3,000 older adults and was funded in part by the National Center for Complementary and Integrative Health (NCCIH) ...... Research seems to suggest that ginkgo doesn’t help with memory enhancement in healthy people, high blood pressure, tinnitus, multiple sclerosis, seasonal affective disorder, or the risk of having a heart attack or stroke."

No, saw palmetto does NOT cure lower urinary tract symptoms:

"The use of plants and herbs (phytotherapy) for the treatment of lower urinary tract symptoms associated with BPH (benign prostatic hyperplasia) is common and has been growing steadily in most Western countries. The extract of the berry of the American saw palmetto, or dwarf palm plant, Serenoa repens (SR), which is also known by its botanical name of Sabal serrulatum, is one of several phytotherapeutic agents available for the treatment of BPH.

"The update of this review included 32 randomized controlled trials involving 5666 men. Compared with placebo, Serenoa repens, at double and triple the usual dose, provides no improvement for nocturia, peak urine flow, and symptom scores for men with benign prostatic hyperplasia."

"Echinacea, ephedra, garlic, ginkgo, ginseng, kava, St John's wort, and valerian are commonly used herbal medications that may pose a concern during the perioperative (3 phases of surgery) period. Complications can arise from these herbs' direct and pharmacodynamic or pharmacokinetic effects. Direct effects include

--bleeding from garlic, ginkgo, and ginseng;

"Potential adverse outcomes of herbal preparation use in childhood ----- Infants and children may be more susceptible to harmful effects due to their immature physiology and metabolic pathways and different dosage requirements. Adverse reactions may also be caused by interactions with conventional medicines, contamination with heavy metals, and adulteration of filler products including other plant species or pharmaceutical agents.

"As complementary and alternative medicines become increasingly used alongside and with conventional drug therapy, there needs to be greater awareness and discussion among parents, complementary practitioners and medical practitioners to ensure the overall health and safety of children being exposed to these products."

"Although often considered harmless by patients, herbal supplements may cause adverse cardiovascular effects from an herbal ingredient, a contaminant, or an herb–drug interaction. Herbal stimulants, including bitter orange, ephedra, caffeine, guarana, maté, kola, areca, lobelia, khat, and others are the most common category of herbal therapies to cause cardiovascular effects. However, dozens of other herbal ingredients have also been linked to adverse cardiovascular events. In addition to listed ingredients, herbal supplements may become contaminated at a number of stages during production.

"Pesticides, heavy metals, bacteria, and pharmaceutical agents have been detected in herbal supplements. Supposedly 'herbal' products that are adulterated with prescription anorectics, antidepressants, diuretics, phosphodiesterase-5 inhibitors along with other medications have been identified throughout Europe, North America, and Asia. All of these adulterants have potential cardiovascular effects. Herbal interactions with a variety of cardiovascular medications may also lead to adverse events."

Not all plants are your friends and lack of regulation, safety tests and labelling:

"How widespread are the adverse effects of medicinal herbs in general? Plants are not just benign sources of food or medicines; digoxin, atropine, morphine, nicotine, and ricin are just a few of the many, highly toxic compounds that plants produce, presumably to kill pathogens, parasites, and herbivores. It is therefore prudent to assume that many herbs may contain toxic or carcinogenic substances that can cause subsequent health problems for humans.......

"Twenty years later, more than 75,000 non-vitamin, non-mineral supplements (including herbals) are marketed in the United States and abroad, generating annual revenues of more than $30 billion. Major deficiencies in the regulation of herbal supplements under DSHEA include the lack of standardization to ensure a consistent level of the (presumed) active ingredients; absence of pre-market testing for safety, as required for all prescription and OTC drugs; lack of adequate labeling to inform consumers about all ingredients in these products; and failure to require prompt reporting of all adverse effects to the FDA."

"Part of the problem is that negative studies are too easy to dismiss. In every case the supplement industry finds some reason to minimize the implications of the studies showing their products do not work, instead preferring to cherry pick small and unreliable studies with positive results. No study can possibly address every possible permutation of how an herb can be used.

"For example, herbal apologists may claim that the dose was not high enough, the wrong part of the plant was used, the preparation was not correct, or the treatment population was wrong in some way. For echinacea they claimed that the wrong cold viruses were used. There is always something they can point to. Of course, this logic works both ways: if it’s so difficult to find the right preparation for the right condition, then how do they justify selling highly variable products to the general population with broad claims?"

A variety of reasons why some people "believe":

--Reference to mystical concepts of "energy"

--Related to this belief is the "Doctrine of Signatures," the ancient magical idea that the shape or appearance of an herb guides its application (e.g., eyebright, having a spotted flower and resembling an eye, for treatment of eye diseases)

---Don’t be reassured by claims that a product is “natural”

---Traditional use, whether genuine or not, is not by itself a good predictor of safety or effectiveness

---Find out what the best scientific evidence says, and seek out critical information specifically

Respect the fact that herbs are drugs, which means:

---They can cause toxicity and side effects

---They can interact with other drugs you are taking

"I’m not sure why anyone would choose to take a poorly studied, dirty, variable, and poorly regulated combination of drugs with unknown efficacy. The answer, of course, must be marketing. People think herbs are 'natural,' an irrelevant feature that does nothing to mitigate the many downsides of these dirty drugs. They are also reassured by the fact that they are part of an ancient and exotic medical system, the argument from antiquity. Of course, bloodletting also survived for thousands of years."