Snake-Oil 101: No, Enhanced Oxygen DOES NOT Improve Health & Wellness 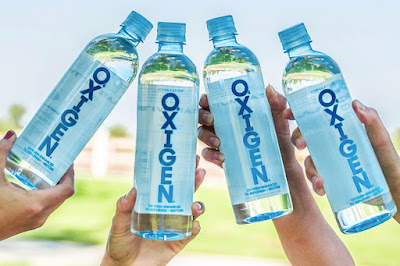 Once again, clever, devious snake-oil peddlers are successfully taking advantage of the majority of people's lack of knowledge of basic human physiology. Bogus products like canned oxygen, water-infused oxygen and oxygen therapy claim to enhance breathing, increase energy levels and overall feelings of wellness. There is no hard science to support any claims, just unsubstantiated, deceptive advertising. The human respiratory system - a breathtaking marvel of engineering - is so efficient that only people with serious respiratory conditions can gain limited help. It is biologically impossibly for a healthy person to be helped in any way by enhanced oxygen of any form. Weak and useless federal regulations allow sly con-artists to dupe people into parting with their money for no benefit, except for the occasional placebo effect.

Canned oxygen: a spray can that contains “95% pure oxygen”:

"It is claimed that several inhalations via the accompanying mask or inhaler cap, repeated periodically throughout the day, can 'improve breathing and reaction time.' Moreover, by using the product immediately before physical activity and/or exercise, canned oxygen can supposedly augment sports performance by delaying the onset of fatigue. Some brands integrate eucalyptus and other essential oils into the gas mixture which, it is claimed, can 'relax the nervous system, relax the muscles, and relieve stress.'

"If manufacturers cite any scientific data on their websites, it rarely has any relevance to the listed device, mostly linking to studies on hyperbaric oxygen therapy in patients or prolonged inhalation of medically certified gas mixtures. Hence, vendors of canned oxygen are gripping tightly to the coattails of the supplemental O2 clinical data. Not only is there a lack of research to support the use of commercial canned oxygen, for any outcome, but the mechanism is inherently implausible. This is because the effects disappear quickly, even in hospitalized patients breathing supplemental O2 for thirty minutes.

"Thus, it is extremely unlikely that several breaths of high-concentration O2 will meaningfully influence the physiology of a healthy individual. Indeed, there may be a lack of research on the device precisely because the basic physiology is well understood. One merchant of canned oxygen, to feign scientific legitimacy, published an online press release mocked up with the appearance of a peer-reviewed journal article, complete with split-page columns, scientific-looking graphs, and a bibliography with four references. People familiar with science publishing will easily spot the ruse, but this flimsy attempt at coercion may well succeed on a layperson."

"Oxygenated water is a liquid food supplement, purchased in its bottled form or as a powder that is dissolved in … water. A given dose typically contains 30–120 mg of oxygen per liter of fluid and is usually sold as 'stabilized oxygen,' sometimes mixed with flavorings, acids, preservatives, vitamin C, caffeine, and/or electrolytes. Commercial claims are vast: faster recovery due to potential effects on 'lactate elimination'; overcoming sensations of fatigue, headache, migraine, and dehydration; improved overall health; improved aerobic endurance; improved vitality; improved liver function; and 'detoxification.'

"(As) an aid to health, oxygenated water has been strongly criticized by the medical community owing to the miniscule quantities of O­2 potentially absorbed via this method. Contrary to the commercial claims, the data on oxygenated water and exercise capacity or fitness are unconvincing. Several studies show no effects of oxygenated water on exercise O2 uptake, exercise performance, or muscle O2 content. A narrative review published in the British Journal of Sports Medicine concluded that performance-enhancing claims for oxygenated water 'cannot be taken seriously'”.

"During a typical exposure, an individual lies for one to four hours in a large horizontal tube in which the air has been pressured to increase the 'drive' for O2 to enter the blood ...... The robust clinical data coupled with celebrity endorsements has inspired naturopathic clinics and health spas around the United States to invest in hyperbaric O2 chambers for their clients. These facilities make unsupported claims to improved health and vitality.

"One vendor suggests, without evidence, that their chambers can result in 'more energy, better brain function, improved immune function, [and] decreased inflammation' while others propose the therapy as a treatment for cancer, Lyme disease, autism, and Alzheimer’s disease. Even the FDA, which is typically slow to address baseless claims in health and wellness, warn that: 'If you are considering the use of a hyperbaric oxygen therapy … be aware that some claims of what it can do are unproven'.

"Hyperbaric O2 therapy is not without risk, with reports of damage to the middle ear (e.g., tympanic membrane rupture), retinal damage, sinus pain, potentially fatal oxygen toxicity, and even pulmonary oedema in patients with undiagnosed heart problems. The FDA even warn that 'Explosions and fires have occurred in HBOT chambers that have not been reviewed by the FDA and are located at unaccredited facilities'. Most medical procedures carry risks that are carefully considered by the physician in a 'risk-to-benefit' analysis. However, in otherwise healthy individuals, without anemia, circulatory problems, or decompression illness, the risks of hyperbaric O2 therapy are impossible to justify."

The details con artists don't want you to know:

"The most salient point is that a single breath of air contains more oxygen than a liter of oxygenated water. A single breath is about 500 mL of air, of which is roughly 20% or 100 mL is oxygen. A sampling of a variety of oxygenated waters reveals an average of about 10 mL oxygen per 100 ml of water. Clearly, even if the oxygen from the water were absorbed, it would be less than taking an extra breath.

"Of course, in science we do not go by theory, but by experimental evidence. And a number of studies clearly show that drinking oxygenated water has no effect on any sort of performance. Subjects performing standard maximal cardiopulmonary exercise tests drank either regular water or oxygenated water and there were no significant differences in results. Furthermore, participants were unable to identify the type of water they had consumed."

Is there any point in drinking oxygenated water?  https://www.mcgill.ca/oss/article/health-and-nutrition-you-asked/there-any-point-drinking-oxygenated-water

Oxygen water? You can’t breathe through your stomach  https://sciencebasedmedicine.org/oxygen-water-you-cant-breathe-through-your-stomach/