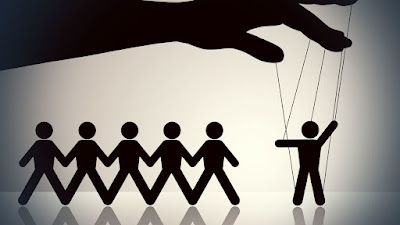 Every politician is a sly, smooth-talker to some degree. They have to be in order to persuade people to support them as candidates and support their policies. However, some are more honest, and less devious, than others. Sadly, there are too many who take smooth-talking to a whole new level, being masters at manipulating their listeners through proven, tried-and-true deceptive tactics in their public speeches. These tactics are also craftily used when answering questions by reporters or citizens.

The tactics are based on formal and informal fallacies which, for the most part, I did not name, since most people don't care for the names, just the idea behind them. Below are the 19 briefly summarized techniques, followed by a list of Related Posts which go more in depth into several of the fallacies.

Note: To avoid being polarizing and offending either liberals or conservatives, I won't be giving specific examples to illustrate each point. Both sides can easily think of examples from politicians they disagree with. The deceitful methods below can apply to ALL politicians no matter their beliefs.

----Is the politician a cunning and devious procrastinator? They may publicly support certain policies. programs or laws, but if they come to power, they will inevitably find reasons to DELAY implementation. The years will go on without action, and soon the politician will have moved on too.

----Is the politician implicitly saying that the ends justify the means? Is what must be done to get to the goal worth the price the constituents, and the entire society, is willing to pay? Are the means questionable? Ethical? Is he/she duping the listeners by selling them something they may want, but getting there will result in potentially damaging consequences?

----Is the politician primarily personally attacking the character of his/her opponents? Without taking the time to discuss issues in depth? This happens often in politics when claims and platforms are weak, and easily refuted.

----The famous Perfect Solutions fallacy - Is the politician only opposing a policy because he/she can shoot holes into it? No policy or program is perfect. They can all be criticized. But do the benefits outweigh the downsides, in spite of the minor flaws?

----Does the politician get emotional, indignant and project a fake confidence? Voices raised, dramatic gestures, a burning passion - all to hide policies that are bankrupt of intelligence and validity. Some in the public are easily duped by speakers who are hot-blooded or elicit sympathy and tears.

----Is the politician manipulating listeners by instilling fear, by scaring them? With only dubious reasons why they should be afraid? Similar to the ploy of acting emotional, there are legitimate things in the world to fear, but they should not be exploited for personal gain.

----Is the politician criticizing an opponent only because their opponent stands to gain if the policy is implemented? And for no other reasons? Any policy, program or law must stand or fall on its own merits. If it is a great policy that will benefit many people, nixing it because certain politicians or business people stand to gain is childish and irresponsible. This is only a lust for power, not caring about the citizens.

----Is the politician trying to manipulate people by appealing to their wishful thinking? And getting millions of votes because of it? If what is being espoused is so far-fetched, so unrealistic, if the politician is then elected, he/she will never be able to deliver.

----Is the politician supporting a certain view only because - "One million people can't be wrong!" Or is he/she backing up the view with solid arguments and evidence? Notice they will never reference the uncomfortable fact that two million people have the opposing view.

----Does the politician always use wit and humor when answering tough questions? Once the session is over, the audience was entertained, but the tough questions were basically sidestepped in a clever, misleading tactic to gain popularity and votes.

----Does the politician continually and relentlessly paint potential voters as victims? Are they made to feel so angry and obsessed by their (legitimate) grievances, that they don't expect their "hero" to give them any sort of sound and plausible platform? One issue politicians will never go away because they know how to push buttons to get votes.

----Is the politician a long-winded, wordy smooth talker who can speak on and on and on? The audience will be so fatigued, will get so much alleged information, that once the end mercifully comes, many will say: "I'm not sure exactly what he said, but there was so much, he must be right!" He/she will talk around, behind, beside an issue, but never directly to the issue.

----Does the politician deceive listeners by only focusing on the weaknesses of opponents' platforms? And never addressing and trying to intelligently counter the STRONG parts of their arguments? Which the voters deserve to know. If an opponent has ten points advocating a specific, complicated issue, ranking from the strongest points at the beginning to the weakest but still valid ones at 8, 9 and 10, will the politician only argue against the last three, and completely ignore the strong first five?

Is the politician forcing an either/or? Is he/she presenting the issue so that there could only be one answer or solution? Taking a closer look at all the facts, there may be good aspects from both sides. Taking the best of both, this would result in better policies and laws. Not always applicable, but often enough to be considered.

----Is the politician almost an idol, and people accept what is said just because they said it? Most politicians who have celebrity status will take advantage of it and think they don't have to be too honest or accountable when proclaiming their views. Starstruck electorate will automatically defend the politician when criticized and vote for him/her no matter what.

----Is the politician banking on his likable, charming, good-natured, good-intentions spirit to influence voters? Similar to the celebrity approach, he/she uses their engaging personality to influence voters who don't care much for substance. The charm and good intentions are there, and, after all, that's what counts!

----Is the politician endlessly repeating certain clever slogans and catch phrases? To where some of the public hear it so often, they think it MUST be true or valid? Has the politician taken the time and effort to back up the glib slogans with solid evidence and reasoning?

----Does the politician go overboard in quoting too many statistics, percentages and numbers? It is easy to mislead with numbers because most people aren't too savvy at complex math or understanding what the stats really mean. Some politicians will hire an unofficial whiz at numbers to help subtly deceive the populace.

----Is the politician deceitfully placing the BURDEN OF PROOF on the opponent? Instead of responsibly taking it on him/herself? When an important assertion is being made, it is up to the person making it to prove it. Not to demand that the opponent must disprove it! This is completely backward, an obvious misdirection.

6 Ways Liars and Hustlers Use Confirmation Bias to Dupe the Public http://www.mybestbuddymedia.com/2018/02/6-ways-liars-and-hustlers-use.html