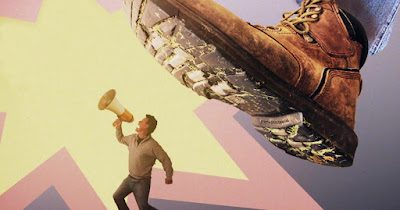 Facts, truth and reality are something the radical left cannot and will not admit to, in spite of overwhelming, clear evidence. Their religious ideology cannot and must not be proven wrong under any circumstances, and lying through their teeth is a necessity to promote their deception. If any honest person dares to step out of line, they will be charged with the medieval equivalent of heresy and be banished from their cult. Most average liberal left-wingers live in fear of not saying the right thing and don't want to be vilified by the more radical and forked-tongue, hate-filled left-leaning voices. Some on the left have no issue violating people's basic human rights like freedom of speech and beliefs. They want the U.S. to be just like North Korea, China, Russia and Saudi Arabia. And you better not disagree with them, or else!!

Below are seven slavery and crime truths the radical left wants suppressed because if the truth got out - it would hurt their ideology.

Many Americans are unaware of the numerous constitutional amendments on slavery:

"A remorseful United States long ago expunged the legacy of slavery from our founding documents. The 13th, 14th, and 15th Amendments to the Constitution are known as the Civil War Amendments. The 13th Amendment banned slavery and indentured or involuntary servitude, the 14th defined any person born in or naturalized into the United States as a citizen, and the 15th prohibited the denial of the vote to any U.S. citizen on the basis of color, race, or 'previous condition of servitude.' Degrading and lamentable discrimination against blacks continued in the United States, of course, but such practices were at odds with the letter and spirit of American principles, now codified in the Constitution itself. Massive, Mount Rushmore-scale upgrades to the nation’s legal bedrock followed in the twentieth century, including the 1954 Brown v. Board of Education decision banning school segregation and the 1964 Civil Rights Act."

The lie that slavery made America prosperous is still touted by some:

"It is bizarre to argue that 10% to 15% of the population, held captive in the nation’s poorest region – and only until 1865 – 'built the country.' It is true that the South, where most of the slaves were trapped, produced most of the cotton, which was one of the primary exports of the antebellum U.S. But it is also true that chattel slavery – feudal peon agriculture, reliant on the unwilling labor of captured warriors – is one of the least efficient means of producing anything, and the South was widely and accurately stereotyped as a backwater."

At least 360,222 Union soldiers, the overwhelming majority Caucasian, were killed in helping to free the slaves:

"And, any honest calculation of the positive or negative impact of slavery on the U.S. economy must take into account the costs of the war that freed the slaves. In addition to boosting the U.S. national debt from $65 million to the then-staggering figure of $2.77 billion (an increase of many tens of billions in today’s dollars), the Civil War resulted in the deaths of an estimated 360,222 Union soldiers and 258,000 Confederate men – and historian J. David Hacker has argued that these estimates are low. Roughly one Union troop was killed for every nine slaves freed, a substantial payment in blood for our sins."

Slavery was not strictly an America practice, but was committed world-wide:

"Slavery was not merely legal but the norm across virtually the entire world. An Arab slave trade targeting Africa existed contemporaneously with the white-led Atlantic slave trade and transshipped far more captive people (perhaps as many as 17 million) into even harsher conditions. For that matter, both Arabic and black masters were more than willing to buy and sell Caucasians. The now nearly forgotten Barbary Slave Trade involved the sale of more than a million European captives into bondage in North Africa, and an earlier version of essentially the same trade likely gave us the global word for 'slave' (eponymous with 'Slav,' or East European)."

No, thousands of innocent black people are NOT murdered every year by police officers:

"Black Lives Matter advocates claim that hundreds or thousands of innocent black people are murdered every year by police officers. Many Americans believe this to be true as well. A survey from the Skeptic Research Center found that most citizens who identify as 'very liberal' believe the typical number of unarmed black men shot annually by police is either 'about 1,000,' 'about 10,000,' or more. Another major study, from Eric Kaufman of the Manhattan Institute, found that 80% of blacks and 60% of educated liberal whites believe black men are more likely to be killed by cops than fatally struck by cars.

"These beliefs are totally contradicted by the facts. According to the comprehensive database of police shootings maintained by the Washington Post, the number of fatal police shootings in a typical year is roughly 1,000, with perhaps 250 of these victims being identified as black. It is true that the percentage of police shooting victims who are black (22% to 25%) is higher than the percentage of blacks in the general U.S. population (12% to 14%), but adjusting for the fact that the victim-reported black crime rate is about 2.4 times the white crime rate entirely closes this gap. In the most recent year on record, critically, the total number of unarmed black citizens killed by police officers – across the country, during more than 35 million police-civilian interactions – was 17."

"The overall narrative of rampant interracial crime and conflict turns out to be wrong as well. According to the 2019 Bureau of Justice Statistics report from the Justice Department, what might be called 'classic' interracial crimes (violent offenses involving black perps and white victims, or the alternative) make up about 3% of crime: 607,725 of the 20,648,040 serious crimes occurring that year (2.94%) fit this description. The person most likely to kill you, as a typical non-criminal citizen, is your husband or wife, not a dangerous individual of another ethnicity.

"Further, black-on-white crime appears to be overwhelmingly more common than the reverse: the 2019 BJS (Bureau of Justice Statistics) data set includes 547,948 black-on-white offenses, versus 56,778 white-on-black offenses. This roughly 90:10 ratio of black-on-white to white-on-black crimes is not typical, but the ratio has been at least 70:30 in every recent year that I examined. These data refute an erroneous but widely accepted narrative."

The breakdown of the family is primarily responsible for Americans in poverty, not the color of their skin:

"A particularly important cultural or environmental variable is family stability, indicated by the presence of a father in the home. Conservative writer Dennis Prager observes that the poverty rate is almost 25% for white children raised in single-mother households, and just 7% for black kids raised in married, two-parent homes. Characteristics like this – part of what is known as the Success Sequence – predict positive outcomes almost identically across white and minority populations. And, indeed, most of the ten highest-earning and most successful groups in the United States today are 'people of color,' led by Indian-Americans, who boast a median family income of almost $130,000."

A concise and representative editorial:

"The United States is a country worthy of our respect and affection, and it remains a beacon of hope for millions around the world. Americans cannot ignore the dark chapters of our history, but we can speak out against injustice and work within our institutions to create a more perfect union. We are great because of our achievements – and despite our flaws. When we acknowledge both, we can continue to grow and improve. That is the America I know and love, a nation that can be an inspiration for anyone."

History of Slavery in the Muslim world https://en.wikipedia.org/wiki/History_of_slavery_in_the_Muslim_world

Exposing the Hate and Hypocrisy in the War on the West https://www.mybestbuddymedia.com/2022/06/exposing-hate-and-hypocrisy-in-war-on.html